Resurrecting a "Dead" Object: Bruce Campbell on the Mexican School 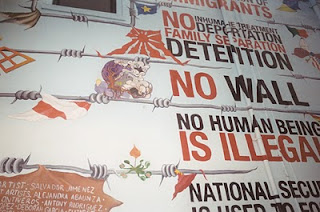 Bruce Campbell argues in "Mexican Murals in Times of Crisis", that conflating the Mexican School with all muralism creates a false narrative where it seems like muralism has died altogether since 1940. The Mexican School existed during the period of 1920s-1940s state sponsored muralism primarily led by Diego Rivera, David Alfaro Siqueiros, and José Clemente Orozco. Additionally, it shunts present muralism into the shadow of the Mexican School, eliding any specificity and present-orientedness the works might have by making them seem like mere repetitions of or references to nationalist history. Instead, Campbell suggests that there is a great deal of mural activity occurring in Mexico during "La Crisis", the economic and social frailty that he argues has divided the state from the people from the 1960s to the present. The consequence of this definitional fallacy is not only to condemn contemporary muralism to the shadows, but to reaffirm official and national definitions of culture, ignoring how culture is a tool of local valorization, meaning making, and community formation that can be used oppositionally. Finally, Campbell argues that this hegemony of the Mexican School has contributed to dangerous reading strategies vis a vis murals where we only look at style and content, and not the context (spatially, politically, historically) in which they intervene. This might be read in rhetorical theory as a need to look at the "rhetorical situation" of the mural- to think more expansively about not just the text/speech/art itself but the relationship between its author's strategic intention, the response of the audience, the historical juncture, and the sense of agency (or hope for agency) imbued to the act of producing the mural. When thinking about muralism it is important to remember, Campbell cautions, that nothing is given-- even the space, the public "canvas" where a mural might be placed is up for grabs.


So how do we refuse an instrumentalized, content-based reading of murals that renders them a mere prop for official manipulation (campbell 13)? One move Campbell performs for us is an unmasking of murals' depoliticized, administrative use by official powers. Murals are used as compensatory tools to boost official legitimacy when it has fallen apart by drawing on the ethos of the Mexican Revolution that is metaphorically contained in the priority of the Mexican School.

Thinking about unofficial and non state sanctioned murals raises broader questiosn about leigitimate communicative forms. The economy of prestige and recognition accorded to the Mexican School and its progeny, versus the bastard language of unofficial murals which use the ethic of social value to contest overly economistic assessments and plans for urban space.

Campbell also challenges the hegemony of the Mexican School in defining and reading murals by pluralizing the mural form. He analyzes both graffiti and mantas (mobile murals on cloth) that arise in 1970s Mexico city, during a period of intense privatization, urban renewal, and plans to destroy much shared communal space (vecindad).

Graffiti functions as the most visible mural form during Mexico's crisis, even though it is as a "scandal" (119), not an affirmation of a shared national culture. Occurring particularly in "cinterón de miseria" or, "belts of misery", around the Federal District and its periphery, graffiti spotlights spaces where the urban crisis occurs, at the level of the barrio and the street (120, 122). Graffiti simultaneously promotes a Mexican style, and a form of "anti-nationalist iconoclasm" challenging and updating the Mexican School tradition (122, 125). Instead of direct, argumentative statements, graffiti operates enigmatically, turning the word into an image that is legible to insiders but not to outsiders (125). It is a "sign and referent" for other interventions in marginal city spaces that can scandalize urban readers, making more explicit the marginality of a particular urban locale (132). Campbell argues that efforts to Mexicanize graffiti by selecting phases that will reach Mexican "readers", to "establish Mexican semiotic materials as the foundation of a graffiti aesthetic" functions as a restraint on graffiti's anti-nationalism (125).

Mantas, "murals with feet" are large mobile cloth images that operate through legible, clear demands (136). It challenges the fixed fresco mural form with a reproducible mural, a "militant graphics aesthetic" (159-160), that resignifies public space (ambientación) (160). Unlike murals they are not iconic but paraphrastic, more polemical than narrative (162).

Finally, Campbell uses these alternative mural forms to think about the space of the local. Murals are used to complement informal territorial interventions (squatting) that expand territorial borders, to mark local spaces that are threatened by urban renewal and gentrification, by instead using local markers to "absorb the national" (112). Informal works like mantas and graffiti refuses the kind of recognition that requires depoliticization as the "price of entry" to official discourse (92). Thinking about murals in all kinds of forms as situated in a particular site, time, and social milieu, instead as mere appendages to official pronouncements, "accenting" instead of "filling" space, allows them to become windows into the "off stage" of public discourse" (89-90).


The "Declaration of Immigration" on 18th Street in the Pilsen neighborhood of Chicago, deals with similar issues, reversing local-national power relations, using an alley way to try and reframe official policy using a vernacular visual form. Campbell's reminder about not reducing the mural to its mere content but also thinking about its context, is helpful here. It could be read just as a magnified and fixed manta from many of the immigration rights rallies occurring in Chicago over the last several years, a generic claim. But its specific location on what is considered to be the central business corridor of a neighborhood imminently threatened with gentrification resonates with the interventions launched by local art groups like those in Tepito, Mexico City, contesting both gentrification and gendered constraints on citizenship by finding new and different spaces to make public and political (communal kitchens, vecindads, school walls), not just making a comment but transforming urban space itself. The place of the mural matters-- it is making a clear connection between seemingly abstract national immigration policy, and the intimate realities of Pilsen residents, many of whom are first generation immigrants, with family members across the U.S.- Mexican border. Just as immigration debates are frequently shunted to the level of administration (the claim being made about Arizona's new law is that it is not a change in law merely continued enforcement of already existing police activities), public space in Pilsen is at risk of privatization as property values increase and the city makes repeated interventions to "manage" chaotic street activity, one example being the creation of the new plaza across from the 18th Street Pink Line stop. Campbell marks a similar intervention that occured in 1974 in Tepito, part of the National Institute of Housing'as attempt to control the informal street economy by building condominiums that would destroy the vecindad, and eliminate social value through the depoliticized language of modernist planning-- murals, produced with the tenants association and Arte Acá were used to revalorize the barrio tradition and contest Plan Tepito (90). "Declaration of Immigration" similarly reclaims and universalizes citizenship not just in its substantive claims but by renewing the importance of public space as a place of political action.

Obviously there is more to say about this piece, which I will comment on in future posts, but I raise it as an example of some of the potential areas where Campbell's work could inspire further expansion. At the end of his text he brackets both Chicano and transnational murals, suggesting that its necessary to evaluate local Mexican mural projects on their own terms. Given the rich connection between the concerns facing artists and communities both in the United States, and globally (rights to public space, privatization, exclusionary citizenship practices) wouldn't it be more fruitful to think about the way mural traditions circulate? Given the hegemony the Mexican School has in historical memory, and the way it has become a dead, frozen object, that is reappropriated and circulated instrumentally to further official policy and government legitimacy, attention to inter-textual, unexpected communication and transformation among forms seem necessary? Refusing to trace parallels and resonances across borders runs the risk of reifying the Mexican School as an ossified and hermetically sealed exemplar for murals instead of part of a multiform, complex arsenal of political techné.
Posted by Caitlin's Blog at 5:21 PM