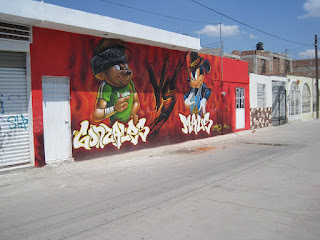 Today marked the (hopefully temporary) end in my four day crash-course in the graffiti scene in León. I had the opportunity to speak with Wes, Kif, Nikkis, Nose, Truko, Asme, Dermy, Kiddo, Dano, Jhard, Sic, Zanko, Nukleo, Waxny, Back, Juan, and hear Arnick, Jafer, and many others express their opinions about legal and illegal graffiti in León.
By way of background: since 2010 the Instituto de Juventud has been engaging in partnerships with graffiti artists to create graffiti murals throughout the city. Out of these collaborations over 100 murals have emerged, a book titled "Cuando Las Paredes Hablan," several articles on the León Joven website, and a few expos. A sharp turnaround from the Zero Toleráncia policy imported from the Giuliani administration in New York, the current media campaign to use graffiti as the contemporary medium for cultural patrimony, rather than a demonized form, raises many questions about the relationship between graffiti and institutions, legality and illegality, state and citizen, and more concretely what does not appear on the glossy León Joven website.
At the heart of the matter is a fundamental paradox, which Juan explained, referencing a line TKid 183 spoke in "Wild Style": "its not that the government doesn't like graffiti, they don't like something they cannot control." In other words, what debates over the government support program raise is whether or not graffiti is more than a question of medium (aerosol) but necessarily individual, spontaneous, and anarchic.
Dermy argued that to work for the government is a form of castration, because it is to give your labor to them turning you from artist to laborer. Bote reminded me that the government does not sponsor pieces that are just letters there have to be characters. The kinds of things that are supported are "happy things; animals, happy scenes," Back elaborated. Nikkis, Wes, Juan, and others pointed out that the sponsorship creates a new culture for emerging writers, one of legality, and one where they can develop their style, innovate, and experiment. Not everyone receives support, and often themes are dictated which limits artistic license. However, Nikkis personalized "the government" and told me about his meeting with Pedro, the director of the institute, whom he was skeptical of, but impressed him by coming to meet with him by a wall he was working at and stood talking to him in the pouring rain, dripping down his face, getting in his hair, ruining his suit, and that it was an ongoing conversation. Wes reminded me that as a result of graffiti's mainstreaming he can make a living off of it.
These conflicts are evidence of an important moment for Leon graffiti, and one which raises broader questions about what it means for a community or a practice to go from being underground to public, how participants negotiate changing power structures and maintain control over their forms of communication, and how it is important not to think in terms of general publics but specific contexts.
Posted by Caitlin's Blog at 6:09 PM

good sharing done about. Thanks for this stuff.