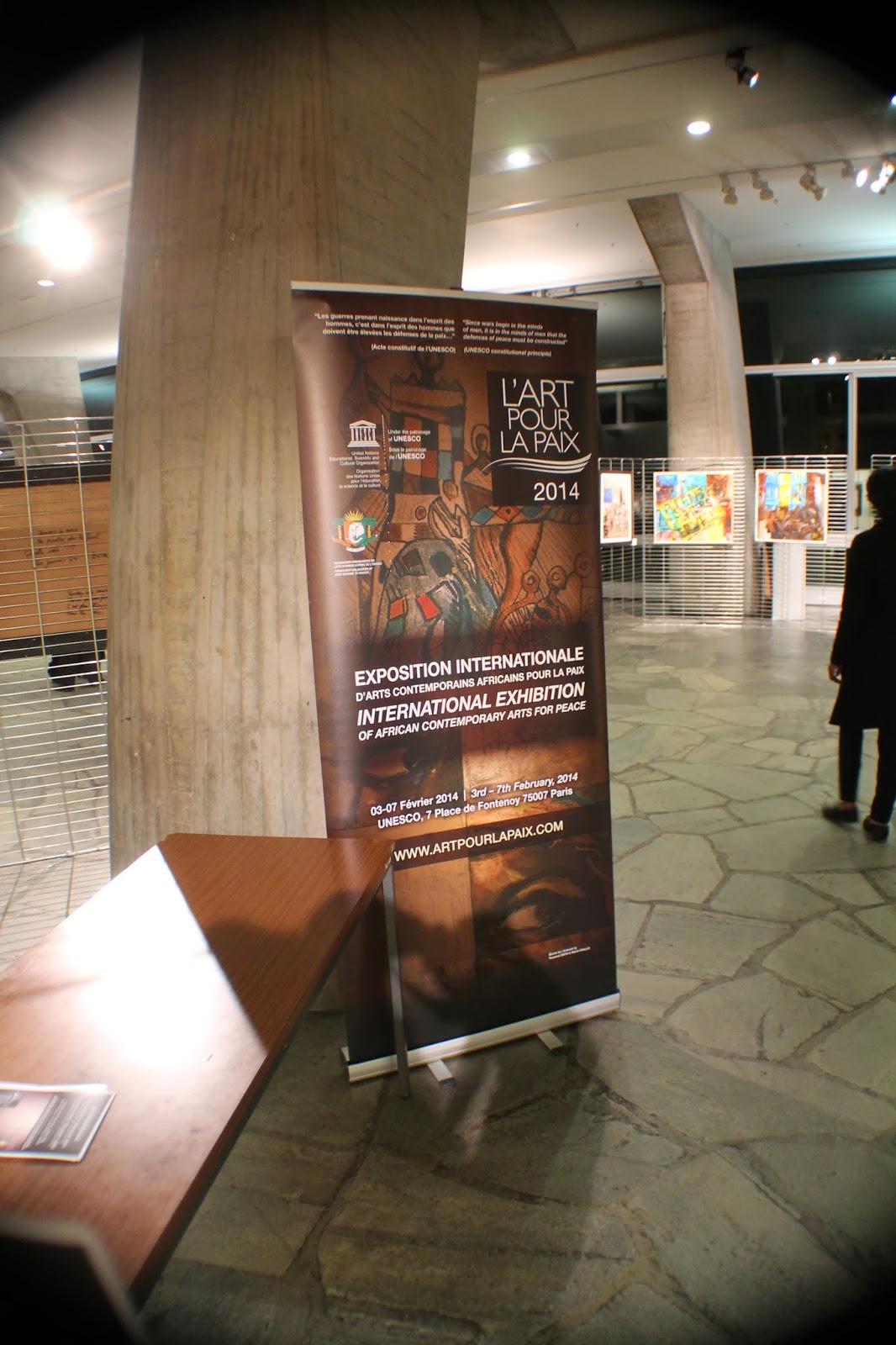 L'Art Pour la Paix is a diverse exhibit that unites artists from the U.S., France, and many parts of Africa, in meditating on the question of peace. Notably, however, the majority of the work center on questions of violence, repression, and haunting memories in negotiating a more peaceful present.

Importantly, focus on histories of slavery, global problems of ethnic violence, and sexualization demonstrate what a complex proposition even conceptualizing of 'peace' may be.


I had the good fortune to meet two of the artists this afternoon when I returned to the show to get a final look at the work, K-Bô, from Guadelupe, and Matondo Watondo, from the Democratic Republic of Congo. What follows are brief summaries of our discussions. 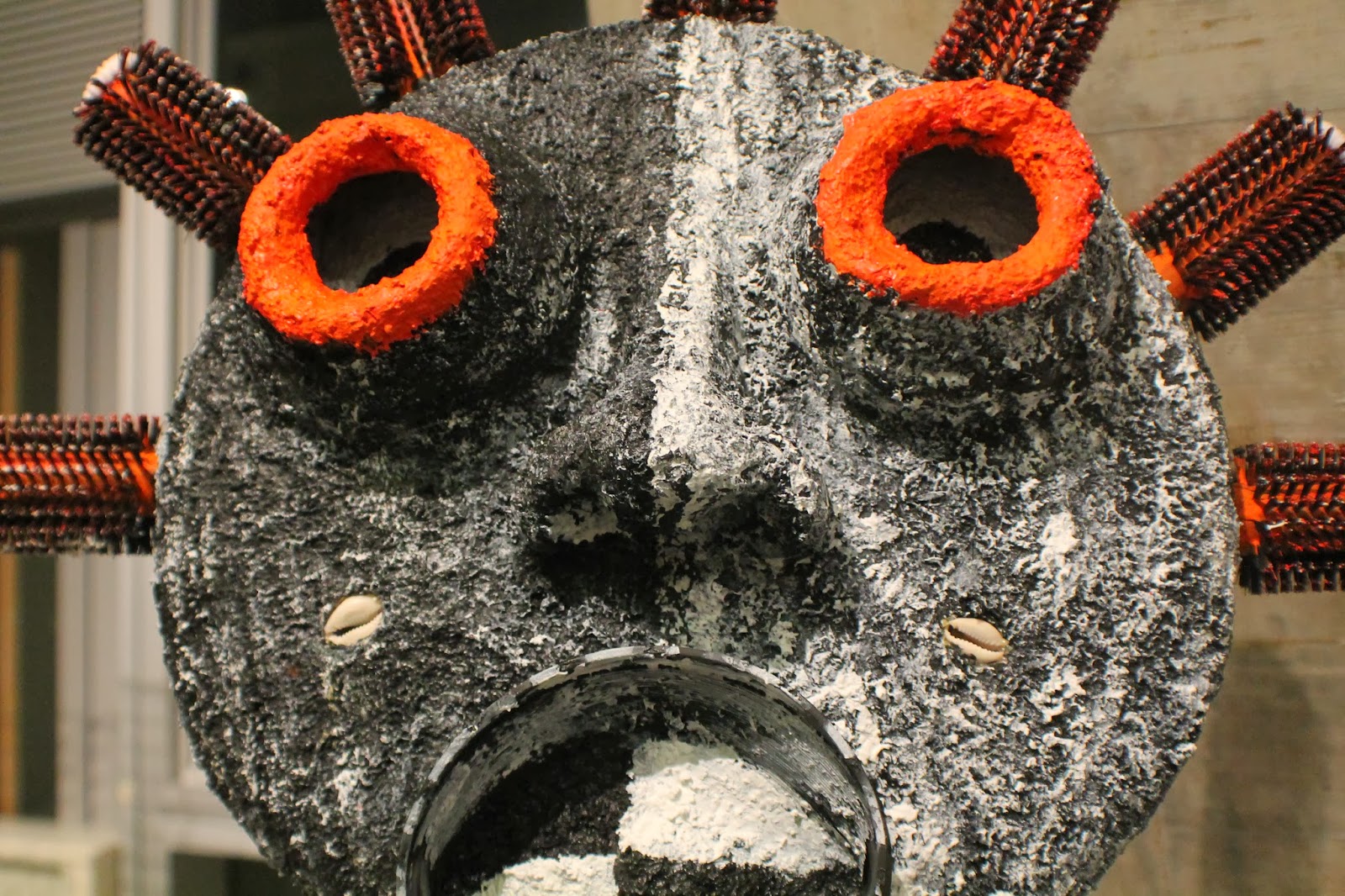 Largely working with masks and sculpture, he explores themes of memory, forgetting, and cultural exchange. Hailing from Guadelupe, he has been an artist since 1985, and uses his work to explore questions of singularity, difference, and universality.

Asking him what his favorite piece was of his several works on display at L'Art Pour la Paix, he indicated his piece "Devoir Memoire," "The Need to Remember," was important to him, because it recalls the need to attend to histories of slavery, histories not often spoken of or communicated about, in Africa. 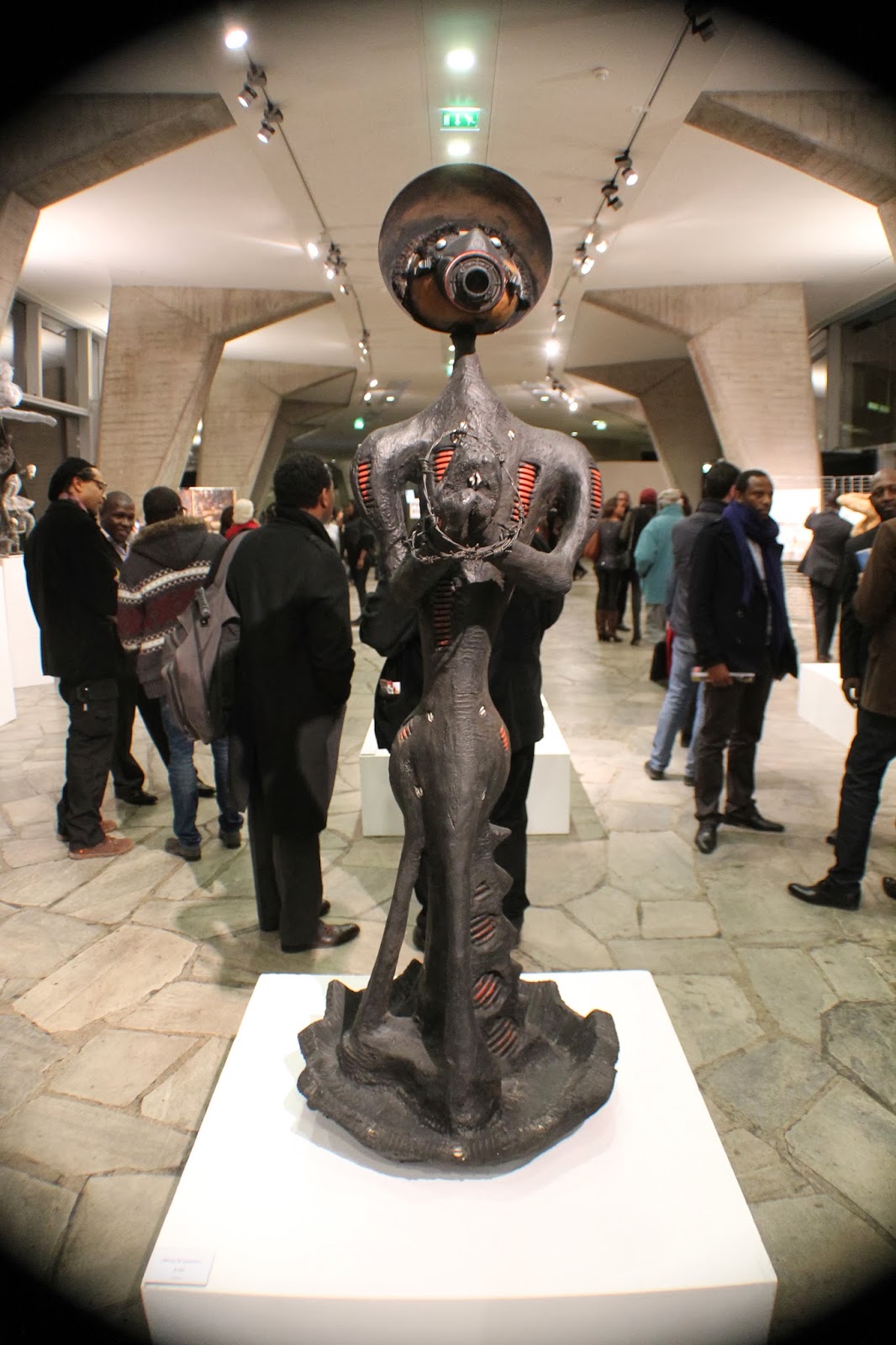 Situating this piece, which attends to painful memories, a devoir as a must, a duty, but even connoting the difficulty of carrying out such a task, points to the fact that imagining piece requires remembering the violence that creates the exigencies for such a pause.

Re-situating his work within the UNESCO exhibit, K-Bô further explained, was crucial. UNESCO, as an international organization historically committed to retaining and celebrating cultural patrimony as a human, not a national, quality, offers a forum where discussions about shared futures can be engaged in by a varied audience. The week-long exhibit offers an occasion to elevate humanity, and changed him by virtue of the contact he had with fellow artists at the exhibit and their work.

Although inside, the UNESCO exhibit positioned its artists as public intellectuals, politically implicated in their aesthetic practice, but also physically available for questioning and commentary. The weeks experience offered a start contrast, K-Bô remarked, to the usually solitary exercise of creation. One can feel friction, or be surprised, by the manner in which audience members interact (or don't) with a work.

I hope to speak with K-Bô more about his work and its philosophy-- unfortunately the audio for the interview was destroyed in a technological glitch, so much of the poetry in his prose is reduced in my quick notes. You can follow him on his website at: http://k-b-jean-claude-artiste-cariba.france-artisanat.fr/galerie.html 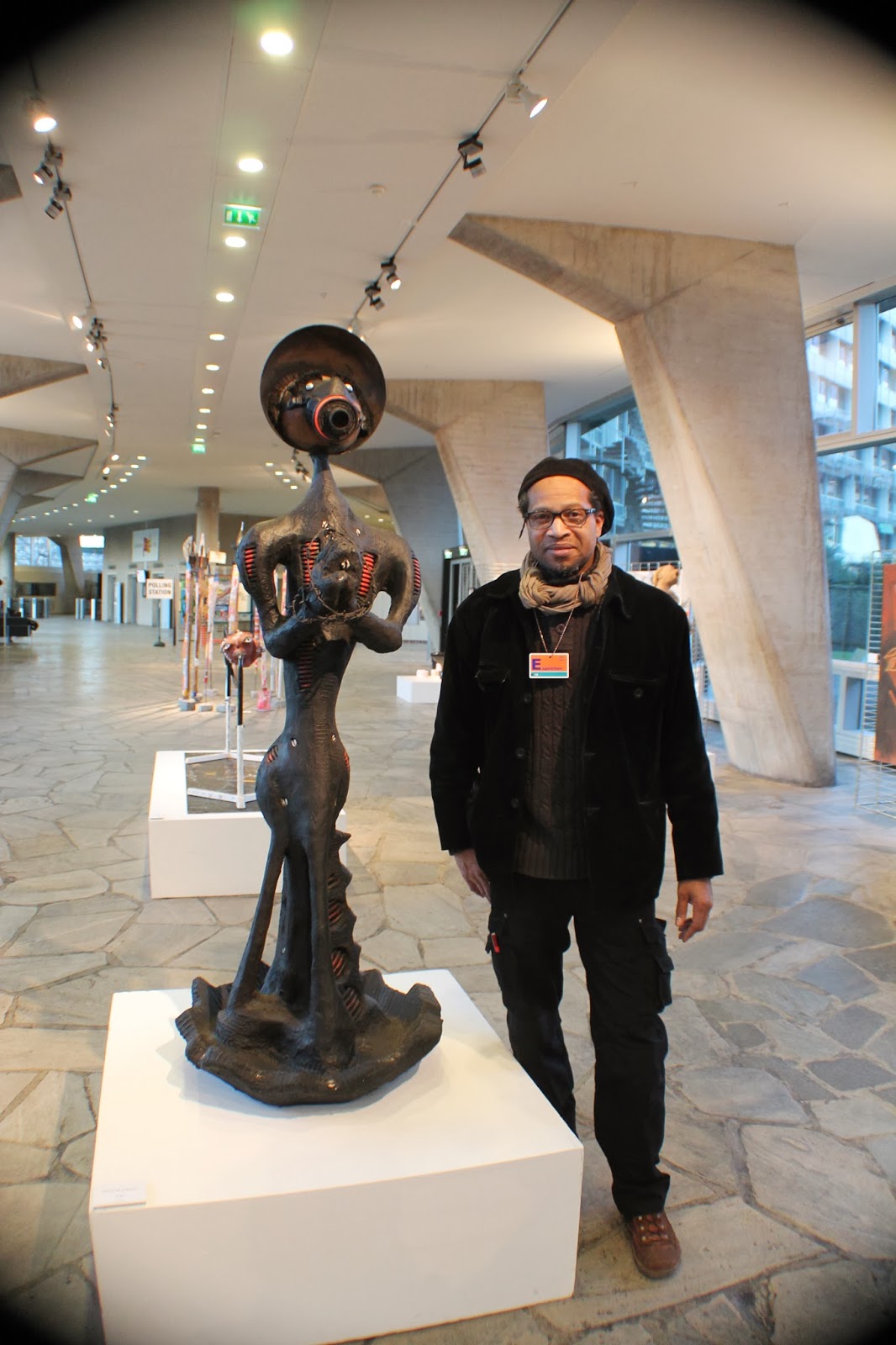 Matondo Watondo is from the Congo, but now lives in Utrecht, Holland. A visual artist and musician, his work at L'Art Pour La Paix offers a representation of the Democratic Republic of Congo that textures and challenges the overwhelming negative representations proffered in prevalent Western media coverage.

Instead of poverty, malnutrition, and violence, Watondo depicts scenes of human communities living in harmony with nature (although not necessarily with each other). Indeed, desire figures prominently in his four tableaus on display, not as the antithesis to peace, but rather part of the varied intensities of everyday life, and conflict is an avoidable (but frequent) element of community interaction. 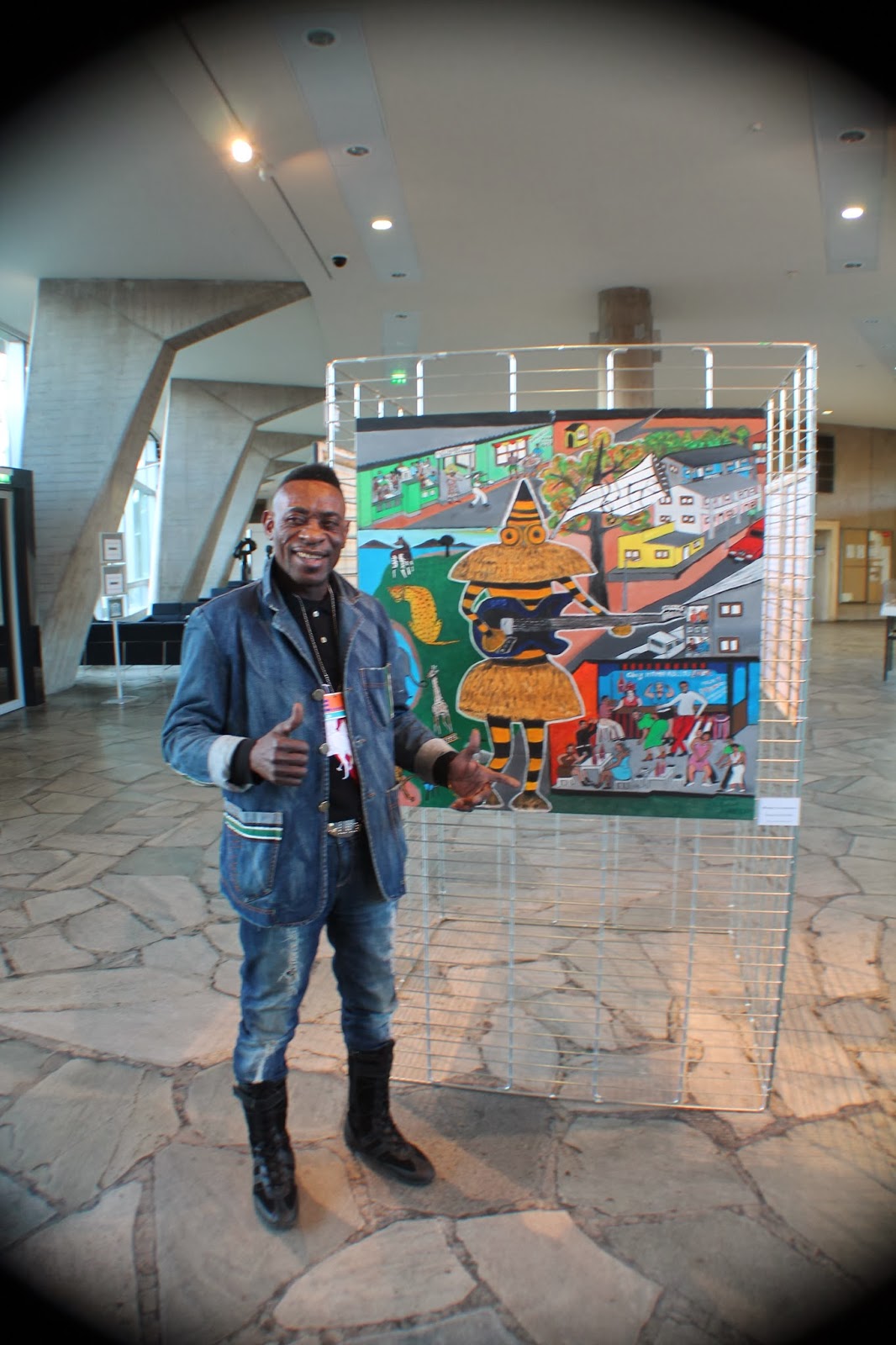 Matondo emphasized, "Artists can show the positive side of things...here is a scene of what it was like to grow up in Congo. That woman [carrying wood on her head and a baby on her back] is like my mother, and I was that baby, and then that little boy." Pointing to the other figures carrying different foods her continued, "and it was an exchange system, manioc or palm oil, or corn for manioc..."


In another tableau he shoes fragments of music scenes, including gyrating dancers and relaxed musicians. He grew up among artists, in a town where many people did artisan work for the tourism industry. Yet another painting explicates a saying, showing two women fighting while their children and husbands look on, about the danger of disciplining anothers' child. The scene of violence offers a more general caution about the need for care in engaging outside of one's familiar milieu, and the avoidability of violence. 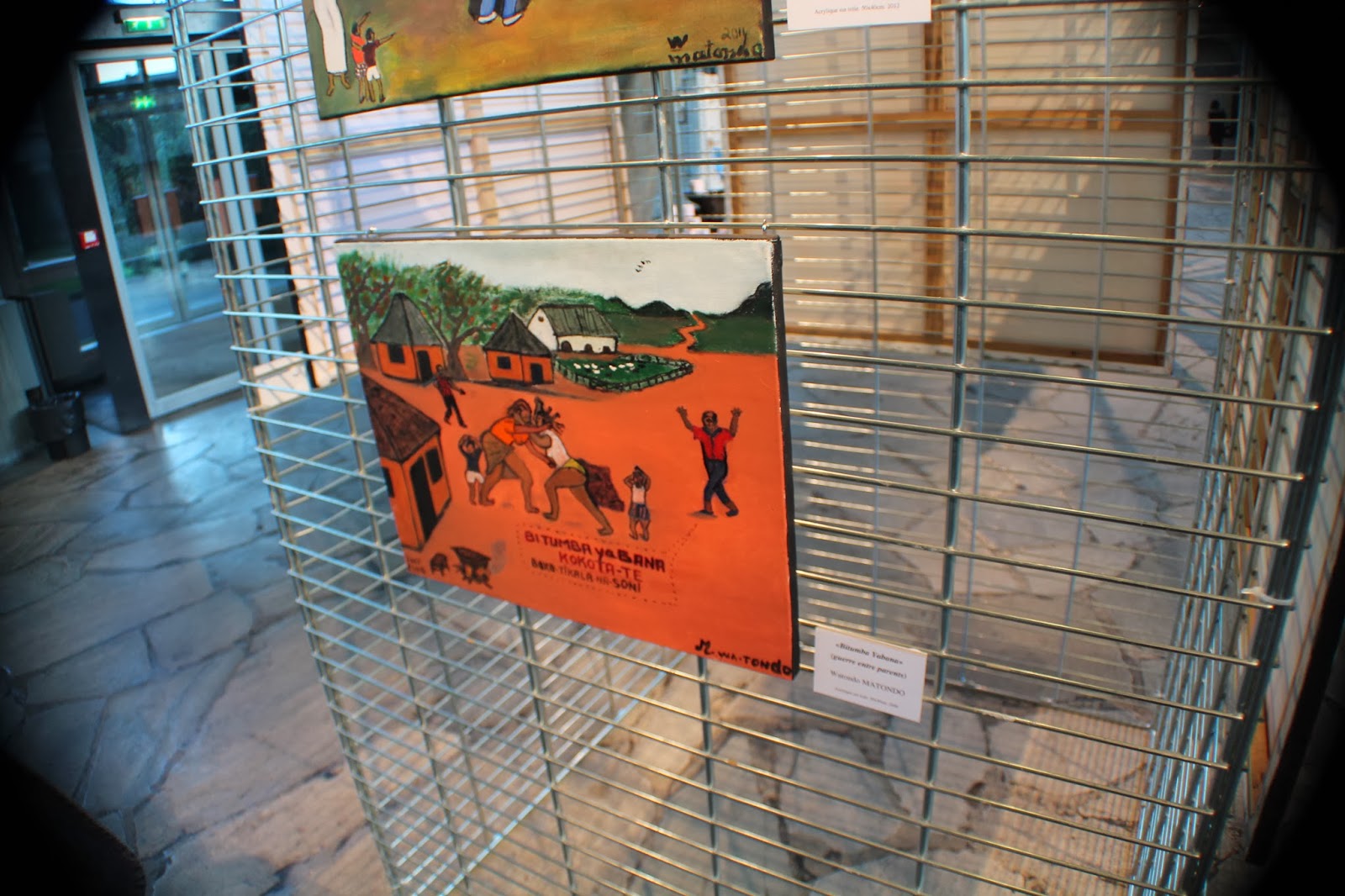 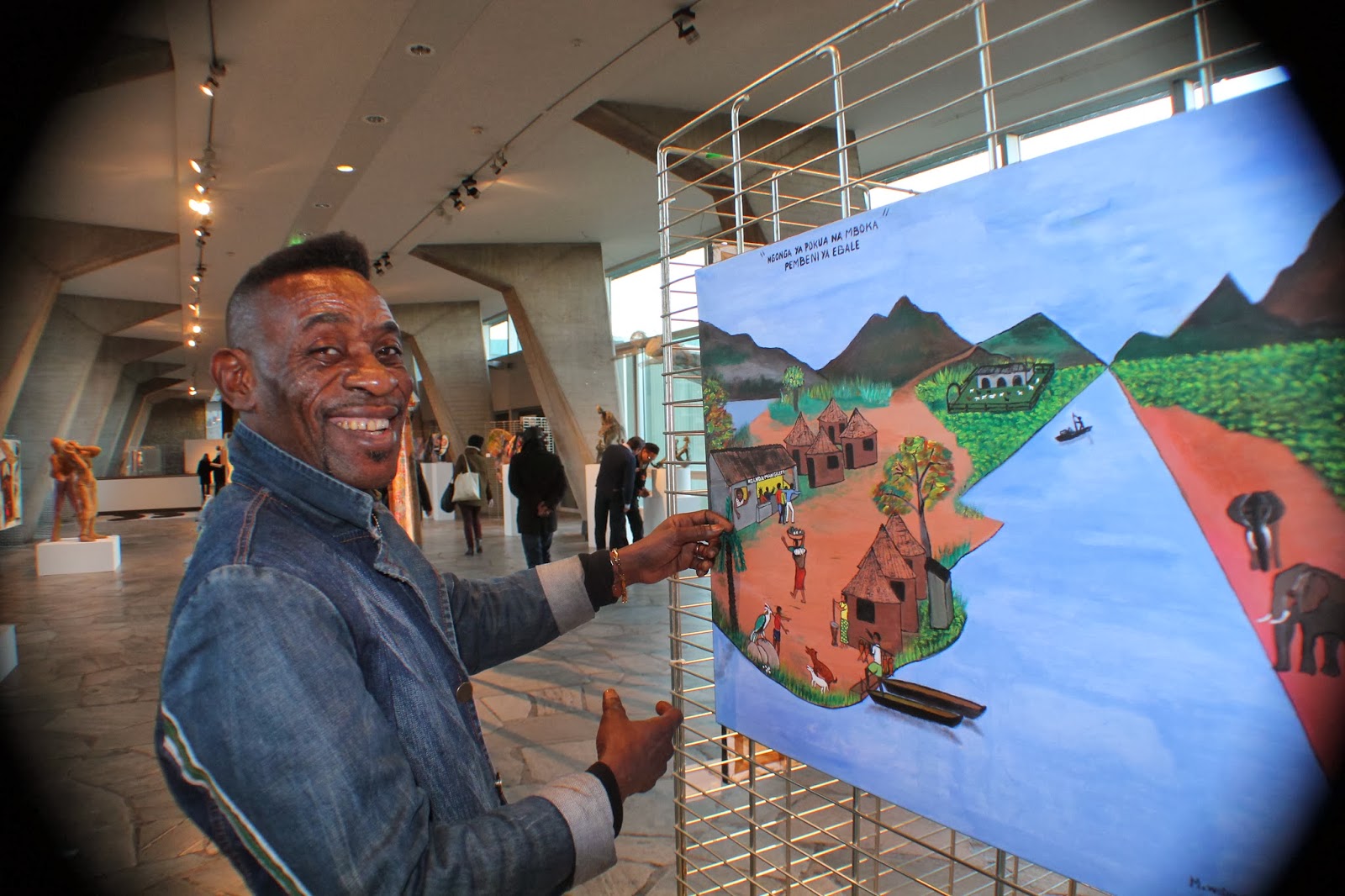 The exhibit, he considered, created an opportunity for cultural change among people from France, Africa, Holland, and many other places, a celebration of multiculturalism. You can follow Matondo's work at: www.watondomatondo.blogspot.nl.

There are many other pieces of note in the exhibit, and worth checking out on the very comprehensive event website which is in English and French.

Thank you so much, Matondo and K-Bô for sharing your work, and time with me today.