Precarity, the Creative Class, and Paris' Tendency Towards the Temporary

Precarity. Precaratization. Precarious. An adjective, a verb, and a noun, 'precar' and its various conjugations has taken on increasing importance with the march of neoliberalism and the collapse of the welfare state. Lauren Berlant notes that the term took on intense political visibility in 2011 in the wake of drastic austerity measures and public protests by and for the Precarious. Of course, precarity, in the sense of bodily vulnerability and finitude, has always been a given, as Berlant further clarifies, an "existential" condition of mortality. However, as an political relation and status, with regards to the distribution of resources and agency, precarity is growing, threatening even "the bourgeois" the advent of which makes its advance seem "general." (Berlant 2012 ed Puar). Precarization Isabell Lorey further explains, relates to practices of governmentality that render some populations more precarious than others. Agentless, in the strong sense of the word, Butler persists, precarization refers to ongoing institutional arrangements that contribute to unequal statuses for different lives.

Precarity has also emerged conceptually as a form that can take on affirmative status- shared vulnerability as a condition for ethics, for Butler, an imperative to craft relations of greater generosity and curiousity, per Berlant, a need for reclaiming the materiality of performance, per Cvejic and Vujanovic, or an aesthetic experience that makes visible invisible affective labor, per Jennifer Chin Davidson and the Creative Arts Ensemble.

I suggest in a forthcoming piece in the Buenos Aires Review that the Tour 13 project, a collaborative endeavor between the public housing authority, the municipality of the 13eme arrondissement, Galerie Itinerrance, and over a hundred street artists and graffiti artists, plays upon a kind of precarity, in particular, by using public art in a building slated for demolition, to impart of visitors a strong sense of both the ephemerality of urban scenes as well as their precarity. On one hand, the project enacts a kind of affirmative precarity by refusing to make public art objects sellable: they were on view for one month, and as of April 2014 have been reduced to rubble. Art spectatorship is an exercise in attention and investment, but not necessarily ownership.

On the other hand, the exposition lines up quite nicely with creative cities discourse that features ongoing conditions of lived precarity in artist and manegerial classes as exercises in freedom, and uses the exhibit to stage a spectacular version of creative destruction, creating a secular shrine for visitors to pay homage to that is immolated in the wake of capitalist expansion.

In a sense, affirmative precarity shares important qualities with what rhetoricians may call a rhetorical exigency: creating a sense of urgency to produce, induce, and elicit rhetorical action. The urgency that is culled out of vulnerability, finitude, and the sense that something is radically temporary is the basis for rhetoric. Tour13's temporary status created a sense of acceleration for visitors: its impending destruction made 10+ hour waits justified, because, if one gave up, there would be no other chance to see the works inside. 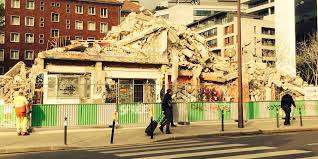 Moreover, a secondary part of the project, the temporary website, created further obligation on the part of visitors and viewers to "save" the project by clicking, pixel by pixel, on images that would at least enable the site's virtual echo to persist. Visitors were able to add their photographs to the archive, transforming them into co-authors and creators, and making the visits to the site not mere acts of spectatorship, but also enactments of invention. These temporary public art projects that call on visitors to act as custodians of memory are rhetorical processes that broaden creative cities discourses into idioms of civic responsibility. As such, temporary public art projects fashion urban citizens who are taught to respond positively to conditions of precarity, not by resisting precarity as such, but mediating its impact.

Such a tendency towards the temporary persists with a more recent project, InSitu Art Festival at Fort D'Aubervilliers. As I suggested last week, the project thematizes and works as a kind of transition, the works are used to help residents and visitors reconsider the history of the site (a Fort, a car production space, a countercultural and artistic landscape) and its future (a multi-use eco-neighborhood), using the temporariness of the project as a way to transition publics.

These projects raise broader questions about the role that precarity, and precarity rhetorics play in developing creative cities discourses as well as more radical discourses about rights to the city, and demands that we ask broader questions about the relationship rhetoric has to the precarious. I would tentatively suggest that  rhetoric is an art that finds its grounds in the precarious, with the caveat that this may  overgeneralize precarity into an ontological or existential given that elides its various distributions and concentrations. Could we further qualify that rhetoric as a form of power relations responds to and works within the conditions of particular kinds of precarity demanding that, in addition to accounting for the needs that created a call for rhetorical action, we can begin to think about the kinds of distributions of agency involved in such acts, the Second Personae, as it were, and the violence immanent to rhetoric? This requires us to think further: is contingency precarious? Are ephemerality and precarity the same?