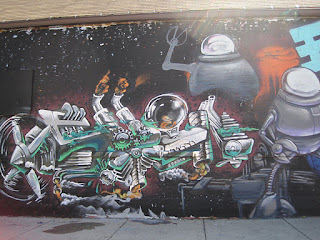 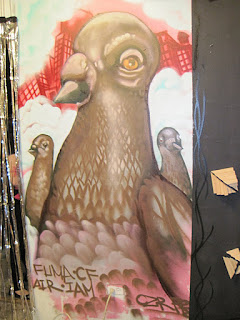 I met Caesar last year at Meeting of Styles-- he did a really cool piece of a giant pigeon for the opening night gallery show. Running into him again he agreed to do an interview with me, and I got to see his crew, and a Detroit crew paint for a few hours. His reflections on how graffiti doesn't need to be immediately legible, that in fact the lack of certainty makes it fit in with the definition of "art" is a strong rebuttal to what many critics of graffiti say defines it as "barbaric." Thanks to Caesar for his time, and his thoughts. Transcript below:

CB: You told me you started writing when you were thirteen—what made you get into it?

C: Break dancing. I got into break-dancing and it was like the natural thing to do and I was always into art, you know, and so then that’s when I first started like trying out letters and stuff and from that point- we grew up in a train yard, over near Stone Park, and me and my friends went a lot to the bottom of the rains and that’s where the majority of my graffiti went to, to those train yards.

CB: Did you sort of learn on your own?

C: No there were people that were better than me that were older that were getting me into it you know but not a lot as far as my own style I got into college when I was about 17 18 I joined CF and I started learning under other people that were really awesome graffiti artists before me.

CB: Who would you say are your top inspirations?

C: I have to say SOLO from Chciago, CHU CHO, HYDE (HIDE?) yeah a lot of those guys, GNOME, he was pretty inspirational and like POSE he’s got a lot of dope stuff.

CB: Where do you think the most boundary-pushing graffiti art is being done in Chicago?

C: I think they are all around. I think you get clusters of talent in different areas, there isn’t just like one side where everyone is the best and stuff is the best I wouldn’t say that just about graffiti but about art in general.

CB: Did you go to art school?

CB: I went to American Academy, and I went to Italy, actually, I studied in Florence academic style painting I actually do paint illustrative style work.

CB: Do you think that’s impacted your graffiti writing?

C: Yeah to the point where its changed it like it really stopped me doing letters I haven’t done letters in like 10 years. I just decided to stick to doing characters and backgrounds and stuff because that what I was really favorable about- I was more into comic books, stuff like that, that was a huge influence on me was going to college. It influenced me to do more character based stuff.

CB: You said you painted at Meeting of Styles four times—is it in little village every time you were there?

CB: Do you feel like you have more of a connection to the neighborhood because of meeting of styles or is it more just like a wall to paint on?

C: Um, honestly for me it is just a wall to paint on but it’s a crazy neighborhood its really cool but I’m not super familiar with it- I’m not from the south side originally, I’m from the North and the West side.

CB: Do people ever come up to you and talk to you while you are painting?

C: Yeah yeah you do get people who come up to you and talk. Telling us they either like it or we should change it up to do something else, you know, everyone’s got an opinion.

CB: Do you try to integrate their opinions?

C: At times, at times I’ll think about it. I’m like maybe you’ve got a point but for the most part I pretty much know what I am doing, like the colors I’m using.

CB: What do you do to prepare for Meeting of Styles?

C: We had two meetings before it, just to figure out what we wanted to do, what the themes were gonna be and stuff like that. So we’d start out with that.

CB: I thought I heard you say—you had over 200 cans of paint—is that how much you need for a production like this?

CB: That gets pretty expensive how do finance that?

C: You are talking about almost $2,000 walls. Everyone buys their own paint basically, drop maybe 100 dollars.

CB: So that’s one advantage to working in a group?

CB: How would you feel if there weren’t any more meeting of styles in the future?

C: Well it would suck. It would be horrible you know this is fun we are just aout here doing production walls being peaceful, painting, just hanging out not really causing any problems or anything like that just trying to make sure still doing this without having the hassle of getting hassled.

CB: What’s your reaction when you have a work and someone vandalizes it or—

C: Oh! It pisses me off! I get upset about it, who wouldn’t, Buddhists, wouldn’t, I myself am not a Buddhist.

CB: What do you do to document your work? 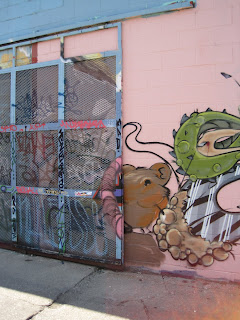 C: I usually use flikr, flikr.com.

CB: Do you usually participate in Chicago Graff Net and those types of forums?

C: Not really, mostly because I’m really just trying to focus on my own stuff, and I still get into graff I don’t do a lot of it anymore, I’m thirty-one and I still get drunk and bust tags and shit here and there but I don’t climb water towers…

CB: But you did in the past?

C: I don’t do a lot of water towers, I did a lot of trains. A lot of underpass walls and shit like that, rooftops and stuff in the summers. Mostly trains, I like trains a lot.

CB: Did you have run ins with the cops doing that stuff?

C: You know sometimes. Sometimes we’d just stay here, and they’d be like “what are you doing?” and we’d just show them what the fuck we were doing or be like “look at what we are doing its fucking awesome!” and you know its worked a couple times.

CB: How do you network with other writers? Do you use this event?

C: Sort of. I don’t really put myself into the whole graffiti thing as much as I used to. I mostly network now with production artists you know like if they are into graffiti they are doing piecing so like a lot of times—actually facebook is a great way to network.

CB: What are your thoughts on the importance of having international artists here?

CB: Are you worried about Meeting of Styles getting commercialized?

C: Not really. I mean no because there is no real commercial graffiti artist and if there is so what. If it brings more attention to it and if it makes it bigger, I am all for it. Its going to make a lot more kids get into graffiti, and the problem with that is you are going to start over-saturating it with bad graffiti artists, and just bad writers that don’t have hand-styles that aren’t good at writing. That’s my problem with a lot of kids today, they just substitute their style and technique in painting with just the fact of getting up.

CB: So its more rather than quality?

C: To me its like, if you are going to get up, make it look really good. If you are going to get caught by the dude who’s garage you are painting on you’d better make sure that that shit came out dope as hell for him otherwise you deserve to get your ass beat. That’s kind of the way I feel about it. Yeah you are damaging someone’s shit or you can justify it by saying ‘actually, I am making this a lot better than it was before.” If I ever got something vandalized, and it looked good, I would leave it up. I’d just keep it up.

Writer 2: Yeah if you do it with style, why not! Yeah if someone puts some wack shit up you are just like “damn”

Caesar: that’s true. Its free art. You are getting free art. M--- that would pay thousands of dollars for it—like Basqiuat used to go around rich as hell writing on peoples’ shit.

CB: Do you think Meeting of Styles is for graff writers or a broader audience?

C: I think its definitely for a broader audience—it wouldn’t just be for graff writers if it was outside. And there was something specific for graff writers it would be in tunnels. Whereas, when you do pieces like this this is trying to transition the general public to liking what graffiti can be.

CB: Do you think people can automatically understand graffiti?

C: I don’t think people have to automatically understand it. Like any art form you don’t need to understand it to see the beauty of it.

CB: What do you think the most utopian function- graffiti at its best—what could it do—for the world for Chicago? 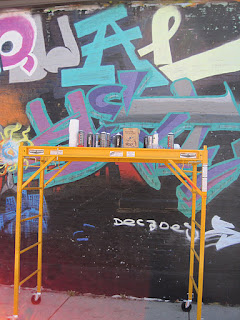