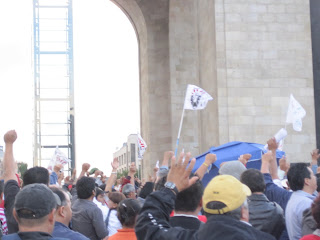 Mexico is fantastic because there are an abundance of places, at least in the city center, where you can stumble onto something that occupies an insane conjuncture between genres, times, or even designated purpose. This is very much the case with public monuments. 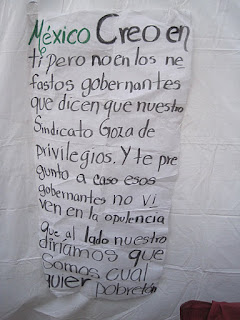 I am staying quite near the Monumento de la Revolución and because it is a much more spiritually uplifting sight than the mall on Paseo de la Reforma by Madrid, I walk through it often on the way home. Also the woman who works at the EXXO store where I buy daily water is really kind. As I walked west to the monument I heard a speech over the loudspeakers-- heard not understood. Buying my water I asked the girl "Qué pasa alla?" "Manifestación. Todo el día." She rolled her eyes a bit. Getting closer I saw three big Ciudad de México health trucks, I suppose in case people had heat exhaustion or other problems. Policía cars circled the monument. A crowd surrounded the monument, and flags waved, big SME flags with a fist symbol, and was facing a podium on the western part of the monument. Though far away the stage was illuminated with a reddish light, and it was clearly packed. Children played ring around the rosie, and some people sat on lawn chairs. Candy and refresco and cigarette vendors passed by "Diez diez diez!" Mostly men. They stood close together, giving hugs periodically, hands on shoulders. The speaker had a loud deep voice, and was asking to see the hands of Mexicans, to know they were were. Hands were raised and people yelled "VIVA!" The speaker continued saying that they are continuing the fight of the trabajadores "La lucha es continuando" and that they will survive until 2616, that things will improve, and that the light will not go out. He mentioned that there are fights all over the world, in the U.S. in D.C., New York, San Francisco, that workers are fighting all over (presumable about Occupy Wall Street). He concluded his speech saying "Viva Sindicación Electricidadores de México" "Viva!" "Viva México!" "VIVA VIVA" and then a chant started "AQUI LA FUERZA DEBES VEN!" Vuvuzelas reinforced the call. The chant continued while another speaker took the microphone, and in less polemical tones reminded the crowd to vote for a new labor leader, because the compañeros are the arm of the lucha.


This snippet of the protest I experienced is a reminder of the vibrant role that public space can play, and in particular places of memory. The monument contains the tombs of major revolutionary figures, and it is an active everyday place for youth, families, couples-- in short it lives. The copresence of vendors, both with carts and with full tents set up, and governmental health vehicles and health information centers suggests that the figure of "revolution" is understood as a way of life, not a fundamental rupture. It is a form of sharing space, communicating affectively, and resuturing social bonds, not necessarily breaking them. The SENSE: the rhythm, tone, and force/fuerza of the speaker, combined with the participating of the large group (union workers in hats, children playing, vendors hawking their wares) created a scene that was coded, by the "VIVA"s and signs and banners as a "political" moment meant to be of a heightened intensity, but really it is an intensification of everyday scenes of communication and public part-taking. Walking to the train station at Hidalgo in the morning I pass a graffitied parking garage door that says "Zapata lives in all of us," waiting to dash accross the road in Coyoacan I see a spraypainted sentence on Bosque Coyoacan walls exclaiming "Calderón = Narcogobierno", another criticism of government on Paseo de Reforma, and on a rooftop across from Museo Estaquillo in Centro Historic, and so forth. The content does not much change but the form does. The aura of the monument and the ritual element of signs with icons like the raised fist helps provide a readability and legibility to political events. A framework for people to occupy and then invent within. Highly conventional public spaces, such as public monuments, while sometimes "background" provide repositories for emotional energy to be transferred, built up, and transformed. The silhouette of the monument to the side of the speakers provided a physical reminder even to a foreigner, that something of import was taking place. Viva. 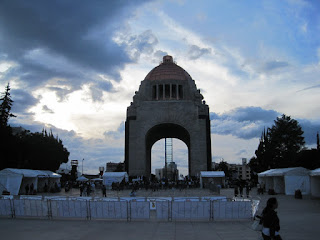