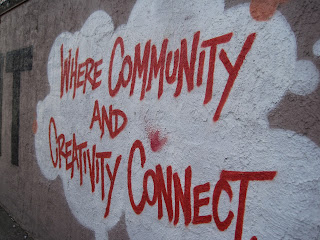 Today I went on a trip with my mother’s students to Tats Cru headquarters to meet with Bio, one of the crew’s members, and for the students to learn about graffiti.  We arrived in the Hunt’s Point neighborhood, large boulevards striated with faded and not so faded markings, a series of bodegas, chain stores and people hanging out on sidewalks, at corners, in lawn chairs on the street, coming out of the 6 train station into the din of construction and food trucks and cars.  The office is located next to a theater building, and enclosed by a metal gate and brick walls.  Within there is a small garden, and then potted plants in vertical and horizontal formations.  Paint and flowers side by side.  Bio greeted us and gave everyone a poster calendar with prints of the crew’s murals on it, an we went up to the second floor of the little room where he pointed to toys they collected from travels across the world, stickers from different artists, and then photographs from artists they have met over time.  I noticed a ‘StayHigh” signature over the door, reminding me of the artist’s recent passing.  Then we went back downstairs to look at the ‘train’ which Bio said had been painted over by a bunch of artists and didn’t have much fancy on it, because they had had a barbeque with out of town artists. 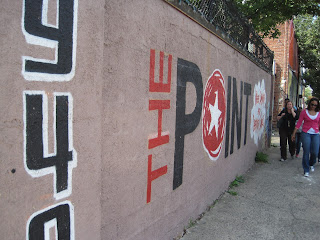 After walking through a courtyard with an L shaped wall with three murals on it and a bed of vegetables and flowers in the angle of the walls we turned out into a repurposed parking area. There, a plyboard wall had been turned into a subway car, covered with tags and throwups, and the four students stood in front of it in awe.  “Do you want to paint?” Bio asked the students.  “Yeah!” one responded enthusiastically. Another retreated to a bench.  Bio disappeared and came back with four plastic gloves and four spray cans, a light blue, dark blue, white and orange.  He told the kids to hold the can close to the wall, straight up and town.  First hesitantly, in constrained spaces, and then across more sprawling distances the students delved into painting for forty minutes.  Bio interjected with suggestions for making wider or thinner line width, color selection and font tips.  Abraham, a 6’2’’ student grinned widely “I like this!” Luis, who has an obsession with video games, wrote “Supermario brothers,” “WII,” and “Legend of Zelda Anniversary Edition.” 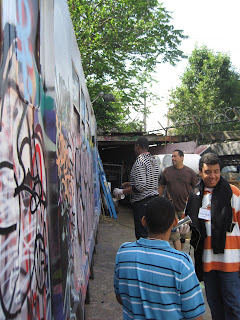 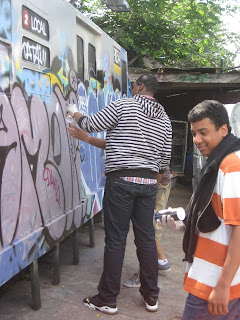 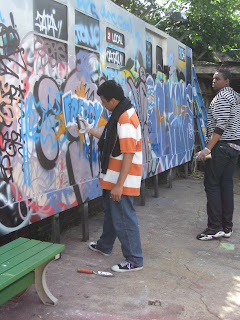 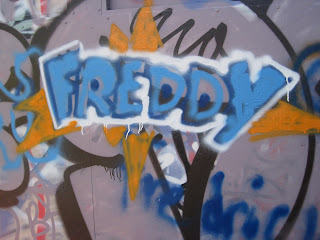 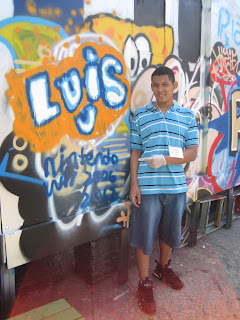 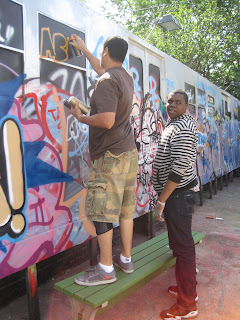 Shamaria, who had been sitting quietly on a bench a little ways from the wall finally wrote her name, carefully and with intense focus. The para, Ms. Barbara, wrote her name and her son’s names “I could get used to this!” she said laugh.  Bio walked us to look at an older mural, done in 1995, on the front of the theater adjacent to the TATS CRU office, and talked about the free programming there, and how TATS CRU used to teach mural classes.  “How did you learn to do art?” Abraham asked “In junior high, from friends, just starting in books, looking at cartoons and comics and copying them” he responded.  “I want to do more” Abraham said, and Bio laughed.  “That’s how I got started too.” My mom, their teacher, added “But always ask permission—otherwise you will get in trouble.” 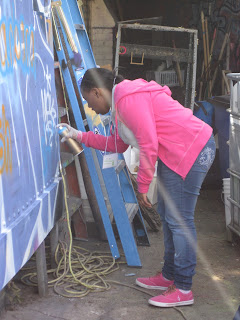 The students are all “alternate assessment,” meaning that they have been diagnosed with varying levels of autism or other mental disorders, and frequently have issues engaging in activities, paying attention, and working independently.  Painting on a fake New York City subway car, although I had mentioned to them that the Bronx and New York were important in the history of graffiti, they were at that moment performing the same practices that youth had done decades before them, enacting a kind of kinesthetic sympathy with older artists through the practice of bringing finger to nozzle of paint can to wall.

At the wall site they exhibited intense focus, playfulness and creativity, and a desire to develop artistic skills.  Seeing other public murals with recognizable figures, a “I like cookies not war or brutality” cookie monster mural, for instance, they commented on such icons, asked to be photographed with them, and engaged in a kind of public sense making. A writer, Haste, mentioned that art is a form of “color therapy” that changes urban spaces.  In the Hunt’s Point neighborhood these visual markings were prominent between the 6 train and the Tats Cru office, as well as in my own neighborhood of Inwood in upper Manhattan, where I saw a piece showing a bridge that read “Community” on a grate near the 207th street bridge.  Bio and his crew have gone to Mexico City, in the 1990s, painted international art figures such as Nikolaev and Vorotnikov from Voina, and welcome international artists like Banksy to their studio.   Watching the students react and respond to different color schemes, abstract representations of interconnected brains or feminism, suggests that the visual is a way to activate urban citizenship, and deliberate engagement and participation is an important way for youth to have a sense of connection to neighborhoods, and broader locales.

Thank you to Bio of Tats Cru for letting us see your office, spending time with us, and letting us experience the joy of writing.
Posted by Caitlin's Blog at 9:35 AM