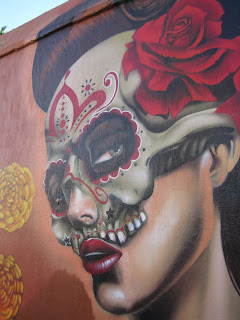 Skirting the line between playful and didactic, John Jota Leaños' opera, "Imperial Silence: Una Ópera Muerta," cajoles, threatens, offends, and woos the viewer using a medley of dance, singing, music, digital media, all drawing on elements from Día de los Muertos, in Mexican public culture, as well as live political issues in the Americas more broadly.  Themes emerge: the forgotten, the ignored, violence, celebration.  The four act piece opens with flamenco steps as the two virtuoso dancers burst onto the stage wearing, as all the players do, a striking assemblage of peasant style dress, and skeleton makeup turning their movements into a literal dance of the dead.  The "Los Cuatro Vientos," four mariachi singers/musicians ever-present both narrating and interceding in the various dramas depicted on screen, also wear skeletal paint, with sequins attached to the curves of their bones to better reflect their internal structure.  Proceeding from the first act, "Los ABCs !Qué Vivan los Muertos!" which is rendered in the style of a children's reading primer, illustrating the fate of Abu, to our Homey "who was capped in the ass," and again, to the refrain "Yes, our Homey who was capped in the ass," illustrated by cartoons of child-like skeletons on screen experiencing nuclear atrocity, torture, gassing, murder, neglect, and so forth.  Macabre, and also hilarious.  Act II presents "Deadtime Rhymes with Mariachi Goose and Friends," an animated series wherein Little Red Riding Hood becomes a gangster conspiracy film, with Red becoming a violent protagonist, the Wolf a neurotic victim, and Humpty-Dumpty a love-lorn mariachi, the paramour of Rapunzel, and Snow White, her conniving sister a crime queen who rides in a "wagon" that bounces like a hydraulic cadillac and works with Red to plan the annihilation of Humpty-Mariachi, and the Seven Dwarves who are instead malicious thugs.  In various intermezzos the dancers appear, frantic feet tapping out violent rhythms, in a frenzy similar to that of the Red Slipper, performing the violent (erasure) of Mexican GI's who were murdered by their platoons, performing balletic acrobatics to conclude by giving the audience the finger, partner-dancing while switching the lead from male to female, scrambling masculinity as well harmony. Another intermezzo occurs with the cheerfully delivered song "The House that Blacks Built," chronicling the domination and aggression of whites against blacks and how now "Tra la la" who cleans the House but "A Mexican!"  Act III, "!Radio Muerto! y el Muertorider" tells the story of the Muertorider, a Cadillac with black and white woodcut prints with "La Katrina" in the hub, and various scenes of violence and neglect on its sides, showing its construction, circulation, targeting by the police, and even its career as a touristy showpiece and photo booth.  As the animated skeletal driver, presumably on Route 66, drives his lowrider, the ""Los Cuatro Vientos," play music, and then fade out as other programs are tuned in, with a focus on "Poor Radio" covering the "Poor," where a heart-rending tribute to the Poor Newscaster's dead mother is delivered, and the story of indigenous annihilation is told by RedBull the Noble Savage.  Finally, CNN and myopic news reporting is lampooned in Act IV: "DNN: Dead News Network," where the reporter called "Donasque Dontatella" who is "dead on the scene" tells the story of a "Million Muerto March," an occupation of the White House with unclear goals, the non reporting about Juarez occurs (and doesn't), as well as a blithe "Think Local act Global" spokesperson and "La Katrina" weatherwoman explain that the solution to global warming is a positive attitude and being "chill."

Impossible to fully describe given its wide topical range, aesthetic complexity, and that, importantly, it works as a spatial practice with the tonalities of the singers, physicality of the dancers, and the weird juxtaposition of bodied and disembodied voices and images that is performative and not merely textual, "Imperial Silence" illuminates the productive possibilities in encountering death as an aesthetic and cultural resources that should be collectively negotiated, not managed and held at bay, and again asks the question, what does it mean for us to negotiate memory, history, and violence aesthetically? It provides a provisional answer in the performance itself: director Jota Leaños stated at the opening of the matinee, that the production engages death in ways that are often written out in the U.S., and he explained to the audience"Some things might not taste as good as they look...so take what you like...experimental theater is about...serious play."

The notion of "serious play" in conjunction with death, both as theme and empirical inevitability importantly has its roots in what might be seen as an understanding of mortality and community that is actively worked out rather than repressed in Mexican culture.  In León, Guanajuato, when seeing the celebrated aerosol mural piece "Las Katrinas" outside the Nicholas graveyard, Wes told me, We see death here, in Mexico, and we can talk about it, a sentiment later underscored by Nikkis.

The Day of the Dead is an occasion for death to become a public art: worked out, practiced, communicated with, where mortality is understood not the end of but a crucial element of humanity.  It is apropos, then, that Jota Leaños uses death, in a sense all of the players in the opera are "Las Katrinas," as a quilting point through which multiple kinds of violence can be negotiated, republicized, and introduced into public memory.

The opera is chaotic, but so its violence, publicity, and morality.  The final rave scene is an exhuberant, carnivalesque, opaque performance of hyperstimulation, embodiment, and excessive enjoyment in the face of and potentially because of death.
Octavio Paz notes: "Everything in the modern world functions as if death did not exit...But death enters into everything we undertake, and it is no longer a transition but a great gaping mouth that nothing can satisfy.  the century of health, hygeine and contraceptives, miracle drugs and synthetic foods, is also the century of the concentration camp and the police state, Hiroshima and the murder story...The word death is not pronounced in New York, in Paris, in London, because it burns the lips.  The Mexican, in contrast, is familiar with death, jokes about it, caresses it, sleeps with it, celebrates it; it is one of his favorite toys and his most steadfast love....The cult of life, if it is truly profound and total, is also the cult of death, because the two are inseparable.  A civilization that denies death ends by denying life...It is useless to exclude death form our images, our words, our ideas, because death will obliterate all of us, beginning with those who ignore it or pretend to ignore it." (Labyrinth of Solitude p. 57-60).

"Imperial Silence," then is a form of "serious play" for the audience; an occasion to meditate on and work intensely with the supposition: what would it mean for death to be integrated into life, and for us to personify, dance with, and account for death.  And what does it mean for the above to take place in a collective register?

This serious play, to play on words, does not intend for the above exercise to be fully comfortable: at every juncture the United States, and Whites, are implicated in ongoing schemes of erasure, domination, and violence of many kinds.  The female dancer, after allowing the audience to watch her and her partner elegantly move, and strike the floor with their feet, challenges such viewing privilege by giving the finger.  However, even the representation of violence is beautiful.  It is unfair, perhaps, to fault the venue for diluting some of the political heft of the piece because of its location, in the lovely theater at the Museum of Contemporary Art.  But it seems to me that the location is central:  announcing prior to the beginning of the Ópera Jota Leaños stated that the performance was not "for a tourist gaze" but for those of us who are cultural outsiders, who get to enjoy it, might it be?

Very smart scholars such as Phaedra Pezzulo have written extensively about the relationship between tourism and death, and how it can still be a politically redeeming endeavor.  Here, though, I want to put the accent, and perhaps the question mark alongside the question of enjoyment, and whether, in Jota Leaños' framing, we can distinguish among different kinds of enjoyment in ways that might yield more productively attuned forms of citizenship.  Specifically, how might place be implicated more critically in the performance itself?  Michigan Avenue is the consumptive-tourism hotspot in Chicago, and importantly, it is a place where visitors can have an anxiety free experience of urbanity- something that presents itself as metropolitan, but precisely without many discomforting scenes of poverty, violence, mental illness, infrastructural decay, emptiness, and racial tension.  It allows high-end retail stores to stand in synecdochically for Chicago as a whole, a Chicago that is home to thousands of Mexican immigrants, the site of immigration protests, local businesses, vibrant art scenes, gang activity, church activity, stoop dwelling, informal economies, and so forth.  Chicago is a place where death is zoned geographically, and shootings in "safe" areas are highlighted as a surprise and ongoing street violence in "shady" areas is relegated to the normal.  So it is with profound gratitude, and interest that I got to see this performance of joy, death, and re-memorialization in a strange theater, within an urban non-place, to use Marc Augé's terminology.

Great piece, really like the quote from Octavio Paz.

Gracias! I just found this... JJL

Thanks for the comment, JJL. It is a wonderful project.