Unsocial Sociability: Why Public Art is Not Just Touchy-Feely

Hello 2013. It has been awhile, and intense work on getting this dissertation written has unfortunately traded off with my ability to gallavant around and just BE and observe the constantly blossoming art scene here in Chicago, and blog about. But I miss you, Chicago. And I am thinking about you. I am also recently thinking about how graffiti art, a kind of art that has a definite, strong, and deep community, can also be helpful for non-graffiti writers or savants in thinking about the way that urban community works, or, its energetic dynamics.

The argument is as follows: Cities, per folks such as Nigel Thrift, Lauren Berlant, Georg Simmel, and others, are simmering spaces of tension, malice, skin-of-your-teeth tolerance, and sensory overload, spaces that we are drawn to, but simultaneously annoyed, terrified, and burned out by.

These above accounts of the urban, a space of love, hate, and slightly detached enjoyment, among other things, share deep resonances with Kant's account of antagonism, rehearsed by Benjamin Arditi and Jeremy Valentine in their 1999 text, "Polemicization."


"The means which nature employs to bring about the development of innate capacities is that of antagonism within society, in so far as this antagonism becomes in the long run the cause of law­governed social order. By antagonism, I mean in this context the unsocial sociability of men, that is, their tendency to come together in society, coupled, however, with a continual resistance which constantly threatens to break this society up. This propensity is obviously rooted in human nature. Man has an inclination to live in society, since he feels in this state more like a man, that is, he feels able to develop his natural capacities. But he also has a great tendency to live as an individual, to isolate
himself, since he also encounters in himself the unsocial characteristic of wanting to direct everything in accordance with his own ideas. He therefore expects resistance all around, just as he knows of himself that he is in turn inclined to offer resistance to others. It is this very resistance which awakens all man's powers and induces him to overcome his tendency to laziness. Through the desire for honour, power or property, it drives him to seek status among his fellows, whom he cannot bear yet cannot bear to leave. (44)"

In other words, that which elicits in us the desire to excel is a profound dissatisfaction innate in human society. The MUCK, and irritability that the social elicits energizes attempts to order society, but such communal undertakings cannot fully erase the resentment and discomfort that participants may feel in such an endeavor.

Kant's account of antagonism is compelling to me: it is easy to love a city, it is difficult to love stranger-co-urban citizens. The idea of the city in all its density that one might want to have a relationship with is much more frustrating, inefficient, noisy, and shallow when encountered in real time/space and people.

Arditi and Valentine note that "For the first time conflict, antagonism, is recruited to philosophy as a positive good" (50) a mechanism for social projects.

So what does this have to do with graffiti?

I am working on my last two chapters about Meeting of Styles Mexico, and Meeting of Styles Chicago, and am thinking through how to describe the festival. It is a space of celebration, friendship, demonstration, excellence, skill, education, and intense energy: generations of writers getting together, young writers getting to meet and learn from older famous ones, families chilling in the autumn air with the music of spray cans filling the air, beers being drunk and blunts smoked as outlines, contrasts, characters and auras are laid down, creating new fantastic scenes where there was just rubble before. But it is also a space where anxiety, frustration, anger, and worry crop up. Are there ever enough spots? What happens when someone messes up the color scheme, or is in the wrong spot? Why do the young kids keep lining out pieces with discarded cans so work has to be redone on Sunday? What if there isn't enough paint sponsors, or gallery space? And how does a graffiti community hold on to a sense of Mexico or Chicago style history in a scene that is increasingly global? 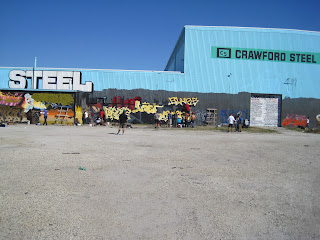 I think that what public art, and especially transitional graffiti scenes like Meeting of Styles teach us, is that you can have unsocial sociability-- you can have simmering beef, competition, worry, and posturing, but still have excellence, skills development, and beauty at the same time.

The benefit of public art, especially graffiti, is that it is an aesthetic lineage that is incredibly dense: lettering styles speak volumes about histories of stylistic development from different cities and people, the skill of the writer, while at the same time still holding something close, not fully readable, and maybe not meant to be fully decoded, a kind of "sacred text" per Raven.

Public art doesn't necessarily need to help us all get along and completely mediate the ongoing antagonism and cranksterism that makes up an urban everyday-- it might just provide a thought provoking, beautiful, skilled and surprising new surface to serve as a reminder that even though cities are spaces of malice, brokenness, and disagreement, they are also spaces that can hold intimate, loving, friendly, and competitive practices that both challenge and release creative energy.

Public art, a form of publicity MEANT to work through anonymity and the author leaving the scene, speaks to the productivity of urban citizens working to articulate an individual style, and create a groove of deep calm amidst the din of everyday city life, or to inject some noise into muted, greying city spaces, but also beholden to physical and social networks to provide creative inspirations (other writers and artistic styles) and mere surfaces (the layers of track, wall, and viaducts that make up urban canvas) to realize it. 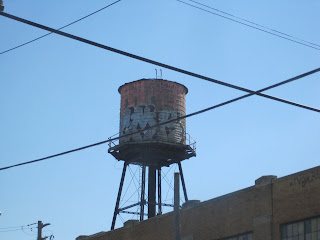