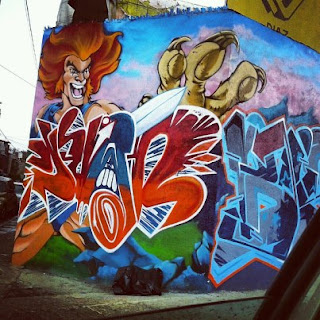 I met Juan last year when visiting León and writer perspectives on the government sponsored City of Murals program. Juan helped me translate a series of individual interviews, some of which are drawn on in my upcoming article "City of Murals: Modalities of Publicity" in the Centro Estudii Urban Art project Inopinatum. Below follows an interview with Juan about his history of writing, his experience at MOS Chicago, since he lived in a Chicago for a long period, and his thoughts on the City of Murals program.  Saludos y gracias, Juan! 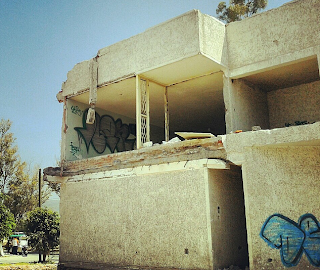 CB: What name do you write?

CB: When did you start?

J: I started painting around 12 years ago.

CB: What got you involved?

J: What got me involved were local graffiti artists from León Guanajuato, that’s where I started. So I would basically say that it was Wes, and my old buddies from the hood…Ceon, Cien, Fijo, and my DTA crew.

J: We are from the north side of the city…Privera de la Presa

CB: So artistically, who influences you?

J: A lot of people…not just my local community, but internationally, Chicago graffiti, LA graffiti, New York style graffiti, which is the best, I believe…and Lion from Bushwick, from Bryce Park Loony, in Loony some Little Village artists

CB: How would you describe the graffiti style in León?

J: Its is really…random. There are a lot of people that just look up to local graffiti artists, some look up to international graff artists, Europeans, but it is pretty combined. Its pretty mixed, like Mexican style, European style, its like really jugo de naranja [orange juice]. 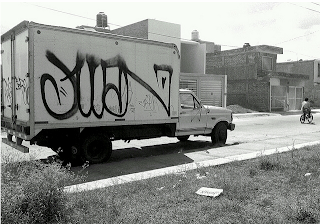 CB: What are your reactions to the mesa [roundtable on City of Murals program in León] that happened yesterday?

J: It was pretty nice. It was actually my first experience in a debate. I was feeling that they were going around and around talking about the same thing. They were not talking that much about illegal [style graffiti] they were just focused on the government stuff. I would have rather there were more people, not just the main graffiti artists but everybody else, so they could express their point of view and…the ones at the bottom who don’t know anything, the little chavitos.

CB: You said yesterday that “government is control.” Can you elaborate a little on that?

J: I took that quote from T-Kid from New York City, I saw him three years ago, he was already old and everything, but, I don’t know, have you seen “Wild Style?” He says, “Its not that they don’t like graffiti, its just they don’t like something they cannot control.” That’s basically what I meant in saying government is control…and if you don’t like what they want, you know?

CB: Someone mentioned that we are talking a lot about graffiti and government and we are not talking about citizens, could you say more about that?

CB: So how do you think government support has changed how graffiti looks here

J: You can feel it, there is a lot of support, because you can see lots and lots of [mural] walls here in León, more than almost every city. Because of that it has influenced many, many people, you see eleven and twelve year olds doing it as well. And how are they going to start? In the streets, doing illegal stuff. By the time they know that the government is providing support from [legal graffiti] there will be too much demand [on the government]. So yeah, its changing, but not [necessarily] in a good way [according to] me. They [the government] don’t know what to do with the plan.

CB: You have said before that they are trying to put a good face on things, but it seems like graffiti writers are able to manipulate the support to use it to their own ends…

J: Yeah actually, they are doing it, I have a lot of friends here that tell them “I have a sketch and I am going to do this [a legal mural]” but then they take [support/paint] and they just take advantage of it, and do illegal stuff.

CB: Do you think that graffiti can change or help communities?

J: IT will. It is like a knife with two sides- it will cut you good, and it will cut you back. So, it can do good things, like here in Mexico the streets are all tagged up, if you come from a place like you, you will be like “this is stupid a lot of tags,” but we can recover it, and other kids will see it and learn to draw…but the best that the government can do is to [sponsor] gallery [shows] and art schools so we can actually go there and not only focus on graffiti but on other techniques like in the U.S. like graphic design…

CB: How do you think the government program has changed how the general public views graffiti?
J: Now they see it [as a ] good [thing]. There are TV spots saying “we are doing this and investing money in it.”

CB: Do you care what the general public things?

J: Yeah I do. Because I want to get into not just only doing my stuff but I want to know what the people thing so I can be a better artist and person and understand society more, and also make money.

CB: How has graffiti changed your life?

J: Many ways. I left home when I was 15. I have been doing this since I was 12. I just broke my leg and it was because…I risk my life, and I risk it because I like it…if I didn’t I’d be somewhere else, [laughs] probably Lincoln Heights.

CB: How do you choose your spots? Like painting in one spot versus some other spot.

J: I choose a spot by going and I study it. I see if police come by and how many minutes, and if it is too crowded, or people that will yell at me, all the factors…

CB: Why aerosol paint? Why not brush paint, stickers, stencils?

J: Well, I do everything, I like to experiment with different techniques but with graffiti is with a spraycan, markers, whatever you can destroy with. 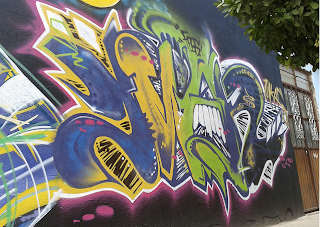 CB: Ok. One reason I ask is because I wonder, why is graffiti growing, and the city is supporting writers, but not focusing on muralism.

J: Poverty. People don’t have the power to get things like [brush paint] in like they do in [more] developed countries. Here you can $1,000 pesos and you will spend half your salary doing a mural, while in the states if you get $1,000 you will only be spending $25 dollars or $30.

CB: So murals are more costly? Its more expensive to do murals? An access thing?

J: Yeah, you know, it reflects how the city is. You know back in the 80s in New York City, Brooklyn, was all destroyed.

CB: That is interesting. Because its like graffiti is both a symptom of a broken social system but also like an argument against it…Would you say your work is political?

CB: Who is your audience?

CB: What do people say to you when you are working when they walk by?

J: Oh, lots of bad words, Mexican slang words, really get into you. Very personal. They talk shit about you. Personal attacks. People go down in cars and chase me away even if they are not cops.

CB: Do you feel like Rivera, Orozco, Siqueiros, have they influenced you at all?

J: Not really. Just in seeing the colors they have used. The way they used to do it…here in Mexico its just the way they think…

CB: Seems like the government stuff is Mexican icons, Bicentenario, but is that actually what people think about?

J: The government just put that on us as a theme. It wasn’t [our idea]. They said “You want support from us? Ok but you have to do Miguel Hidalgo…you gotta do Diego Rivera, you gotta do Siqueiros.” They don’t tell us do whatever you want to do…

CB: It is interesting that the government is promoting this memory of revolution… but it’s a revolution that is controlled- so what does revolution mean to you as an artist?

CB: What did you think about the festival?

J: Its just amazing. It is one of the most amazing festivals. Because you get to see local people and you get to see TKid, King 157, Amuse, Rebel, local artists, and you get to meet people, even though its not [concentrated] its too disparate. I wish everyone were on one wall [instead of walls separated]. And there were a lot of after parties and you have to take the bus half and hour and come back…

CB: How did you find out about MOS?

J: This store on Ashland called “The Basement” with pamphlets and information in it

CB: What do they sell?

J: They don’t sell cans they just sell the tips.

CB: What was your favorite memory of MOS?

J: I’m seeing everything right now, all the good artists, just walking around the Crawford Steel Company, that was a wall that I really liked, it wasn’t the main main graffiti artists but just local people.

J: There is lots of graffiti there, not the mecca, but that’s where most of the Hispanic people live, and what I have seen in Chicago is that most people who paint and write are Hispanic. And there are different races but there is a lot of Latino-Chicano.

J: Yeah people come from the suburbs, and as you know, if you do like art, even if you like sculpture, you will go there to see it.

J: Its good for the local graffiti scene, it shows that we can be in more than one place, that we can go all over, to Europe, to paint. To use myself as an example, I get to go to Chicago…

CB: How do you feel when your work gets gone over?

J: I really don’t pay attention to it. I just think that if they have gone over me, then they want to be like me…I can just go back and do it again…it like a cat and mouse game…

CB: How would you feel if MOS was done and gone.

J: I would feel bad. Even though you can find other ways to get different kinds of sources together, techniques and colors, seeing it live that is where you learn the most. You go and see how the can was handled by more experienced writers…

CB: What are some things wrong with the festival, organizational stuff?

J: Organizational. To get all the walls together and gather everybody in just one place and to let people paint and give more walls. I know that Crawford Steel is next to tracks…

CB: Anything else you want to say about graffiti, Chicago?

J: I wanna say, whats up to my homies in Maywood, Melrose Park, and right now I am living in Mexico and I will be going back sometime. To all my homies out there, if they get a chance to listen to it. 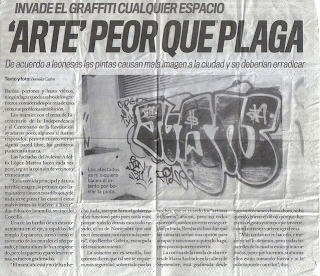