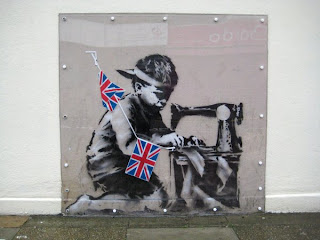 Banksy is no stranger to controversy. His street art pieces, done in secrecy usually poking at issues of state domination and social inequality, such has his work on the Israel-Palestine wall, and his critique of Guantanamo Bay launched via an installation on Disney property, use simple and elegant stencils or installations through iconic figures and images to detour, transform, the dominant meanings ascribed to overdetermined spaces.  Banksy's secrecy magnifies the mystery and allure around his work, working to retain a sense of the street and underground even as some of his work is sold in galleries for thousands of dollars.

Recently, one of his pieces, titled "Slave Labour," showing a Dickens-esque barefoot youth working away on making a Union Jack combines an incisive critique of nationalism and the labor inequalities that an exceptionalist attachment can both paper over and sustain, was located in Haringey, a borough outside of London that was the location of some of the 2011 London Riots. Located on the London equivalent of a dollar-store (everything costs a pound, the store called, aptly, Poundland), the piece is arguably a point of "local pride" attracting tourists and non-residents to the otherwise unremarkable Wood Green neighborhood.

In early February the piece was ripped from the wall with no explanation by property owners Wood Green Investments. It appeared in Miami, at Fine Art Auctions Miami with a price tag between $500,000 and $700,000. After substantial public vitriol the auction house has claimed that it has returned the piece to the consignor, identity unknown, while Wood Green town council leaders have continued to demand that the piece be returned.

The controversy has received coverage in the New York Times, and other major news sources, and yet, although the sense of loss and outrage felt on the part of neighborhood residents points to the importance that the art piece had as a public art work in public space, media analysis blithely parrots back commonsense understandings of "private property" in order to short circuit debate.

Sarah Lyall, in her NYT piece notes: "Legal opinion generally holds that Banksy’s street art belongs not to him, but to whoever owns the walls he uses as canvases." Sure, legally, Wood Green Investments has legal title over the wall, but pragmatically and on an everyday level the residents and workers who spend time within and outside of the building are indeed the custodians of the wall and the citizens who bear the effects of the art work as it reshapes the appearance of the wall and neighborhood.

This commonsense capitulation to private property ignores how public art reclaims and can constitute public space, and highlights the need to engage in broader public dialogue about collective ownership over public space. These "commonsense" concepts of the economic as a realm of the private have resonances to rhetorical histories and public sphere theory. Robert Asen has argued that appeals to an "ownership society" in the United States make "ownership" an "emblem of good citizenship" papering over social inequalities that create barriers to both "ownership" and equal citizenship, making bourgeois publics stand in for a multiplicity of other kinds of publics. Further, Megan Foley points to how tropes of the home, or oikos, persist in political economy discourse, and function perversely to make citizens the caretakers of big banking, and those who were the collateral damage in the housing crisis "delinquent" citizens.

The buck, or, rights to the city, stopping with owners rather than users has been resisted by organizations like The Community Rejuvination Project in Oakland, California, a community mural organization that understands ownership over space to be based on use and stewardship rather than contract, using the above claim to justify interventions and reclamations over abandoned spaces through artwork and cleanup projects.

Banksy is a star in the street art world, having a level of name recognition that in many respects makes his work its own genre, working through different processes and broader realms of reception and circulation than more "ordinary" public art practices such as illegal writers, and permission based muralism such as the CRP project. However, what the Haringey controversy highlights is that much like the celebration of star artists such as Jean Michel Basquiat and Kieth Haring, focus shifts too much in media reception to the novelty of the art work at the expense of attending to its context, its location and relation to public space.

However, the resurgence of the questions of rights to space in the wake of the "Slave Labour" transnational trip (ironic in many ways given the legacies of transatlantic middle passage where social life is transformed into commodity value) demonstrates that public space has a durability and a capacity to haunt debates where the "public" is often elided. Nevertheless, the aporia in critical discourse around the mural also points to the absolute necessity in developing public vocabularies of public space, and collective ownership based on lived relations rather than abstract contract law, something along the lines of what Vandana Shiva has called for in the context of Intellectual Property Rights, as sui generis rights, communal rights to resources and a more robust sense of the commons.