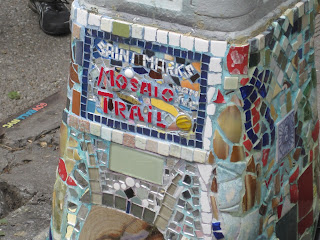 He is called the Mosaic Man, and he has been installing mosaics on the bottom of street lamps in New York City's East Village for the past 28 years. Walking with my sister who was just talking about him last Sunday, we suddenly saw a small crowd surrounding a long-haired elderly man with a cane entirely covered in pieces of tile and glass, his dog, relaxing on the cool sidewalk, a cart, with a wheel covered in mosaics, an assistant, a student named Jessie accepting tile donations, and a folded sign, worn and yellow, urgent text scrawled across. 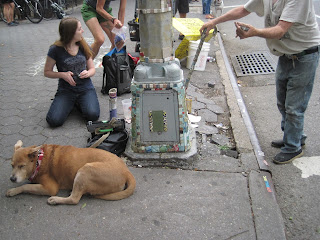 I approached cautiously: I have done a lot of interviews but I am still painfully shy and an introvert, and I prefer to observe interactions than to ask half-assed questions when I am unfamiliar with an artist's work. The Mosaic Man was dialoging with a woman with that special fuschia-red box color, she recording him on a small camera. 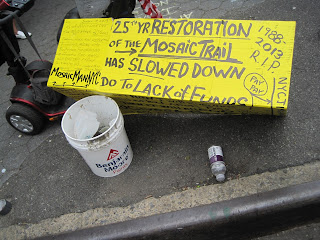 "I've put in 28 years of good life!" He exclaimed, "And it will take $128,000 for us to refinish and complete two miles of mosaics on every lamp post. [I] Could have done ten miles, if I had the money!" Pointing to the glue that his assistant applied liberally to pieces of tile he noted that the city has put up netting and glue on some of the lamps, but that glue is of inferior quality. "We want something that can last 100 years." Shaking his head he continued "Its very likely we won't be able to finish. We get a dime here, a nickel there...[now] I'm like a fundraiser...it's bullshit! I should just be doing art." He paused, "I had to take some time off last year to make money, but, [I wanted] to feel legitimate, I need to do work in the street. Not like jerks like Picasso, or Keith Haring, those guys are jerks!" 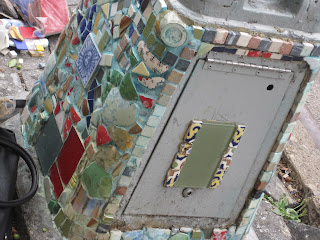 He winked at a passer by "This is my rant. I do that." 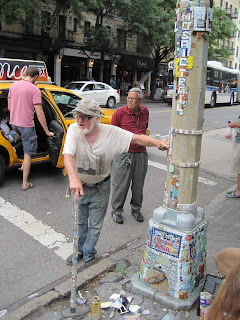 The Mosaic Man's polemic is a common form of address in New York. His wink revealed a sanguine awareness of the ways in which a rant is often delivered and received in public-- the rant often comes from a socially marginalized character, so although it is loud in form, it is quiet or nonexistent in its impact. However, in this short moment, he had an audience, and rant had an impact (although small) registered in the donations, dog pets, gathered crowd, and puzzled onlookers. 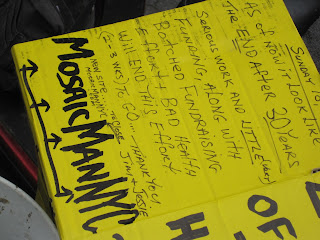 What enabled his rant to achieve some traction? Was it the dog? His art? The fact that in the East Village because historically it has been (though hardly anymore) an avant garde neighborhood, there is still an affective landscape that admits and even valorizes such forms of address?

Jessie explained to me that the city gives them permission to do their work but not funding, so it is not truly a commissioned process, so they hope to raise enough funding on their own so that they can complete the two mile walk.

The Mosaic Man's project is an important one because it is one of those modest forms of cultivating texture and a sense of durability in an urban scene where so much is smooth and fungible. The rough and uneven tiles index places and past scenes, literal fragments of diverse stories. The Mosaic Man's mission is not just a means for refurbishing tiles, but recuperating spaces for encounter in one of New York's historic neighborhoods, small monuments to the surrounding community. 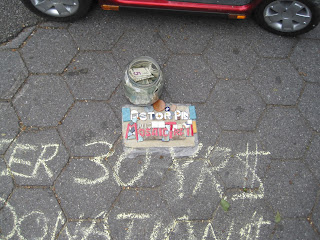 To help them out go to: http://mosaicmannyc.com/