Institutional Ambivalence: American Social Realists in the 1920s and 1930s and Contemporary Graffiti

This morning, while editing the introduction to the dissertation and trying to thicken the dialogue in my notes about how the 1932-1934 Diego Rivera controversy at Rockefeller Center has been critically discussed, I came upon Raymie E. McKerrow's 1983 piece, "Visions of society in discourse and art: The failed rhetoric of social realism." The piece effectively conveys some of the complexity and paradoxical optimism in artist communities during the Great Depression. In the wake of a collapsed, or, seriously weakened artistic patronage system, the Federal Government took on a much larger commissioning role and artists began to self-organize. 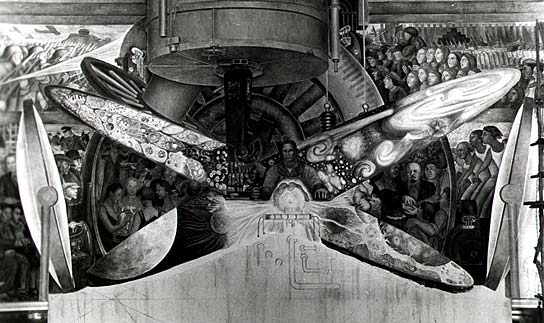 The Artists' Congress was one such organization, which produced the short-lived radical publication "Art Front." McKerrow observes:

The rhetoric of the Artists' Congress, ultimately, cannot be separated from the art of
social realism as innovative presentation. Unlike socialist realism, which hewed closely to a
party line, the art that has been labeled social realism spoke less to a specific ideology than to
a general reaction against police brutality, poverty, and other social ills of the period. Philip
Evergood, for example, saw in the Depression an opportunity for artists to free themselves
from the confines of "patronage art" and produce art for the people. Along with others,
including those in governmental authority, saw the chance to bring art and the people closer
together—to make art a part of the everyday lives of ordinary citizens. Evergood's Artist in
Society (1937) depicts the transition from wealthy connoisseurs poring over paintings they
dimly understand to art produced for the people, and reflecting their oppressed conditions
(Peeler, 1987). Where the "American Scene" painters (Grant Wood's masterpiece, Amer/can
Gothic is an example) were "celebratory" in their depiction of subjects and scenes, those
earning the sobriquet social realism tended to believe that "critical dissent had more
validity" (Peeler, 1987, p. 208). Although their discourse railed against the establishment,
their art tended to depict the downtrodden, the oppressed worker, the poverty-stricken "as
sad, drab, and spiritually depressed individuals, rather than as heroic workers bursting with
the kind of vitality capable of building a new society" (Baigell, 1974, p. 59).
While they took as their subjects depictions of "labor unrest, police brutality, lynching"
and the threat of fascism, they tempered their fiery criticism by adhering to Government
standards as necessary to win commissions. In part, the commissions allowed them to
continue with more radical projects on the side. (233)

The situation that McKerrow describes is compelling. In the wake of seriously weakened capitalist institutions, social realist work aesthetically contended with such failed promises. Moving away from a patronage system of artistic production, artists engaged with the idea of the "masses" and the "people" as a legitimate aesthetic object, but also, as audience.

Federally commissioned projects, however, sought to temper the radicality of public works. The people were to be represented as a harmonious proposition, part of a flourishing "American Scene." Craftily, some artists would follow conventional guidelines in federally commissioned work, pocketing their stipends, and then spending them to produce more radical work. A similar practice takes place in León, where, as part of the City of Murals program, graffiti artists will apply for municipal support and then use the same paint to produce illegal (or illegal style) throw ups. Working in the grey areas of institutional sponsorship, graffiti artists produce styles that diverge from an iconic approach to national identity, playing with abstract lettering and fantastical imagery in the place of figurative renditions of famous historic figures. The social effectiveness of such work becomes more fuzzy, tethered neither to institutional fidelity nor complete autonomy. An analogous phenomena were the Chicago Transit Authority (CTA) Sponsored graffiti battles in Chicago in the 1990s where the CTA, a major force in graffiti eradication, would host (and provide paint and cash prizes) for graffiti murals.

I highlight the above strange state-artist alliances to push towards thinking against artist and institutions in monolithic terms, instead, suggesting that we stay attentive to the strange spaces of alliance, lull, and play that happen among official and unofficial publics.