Trying to Whitewash a Subculture: The 5Pointz Fight 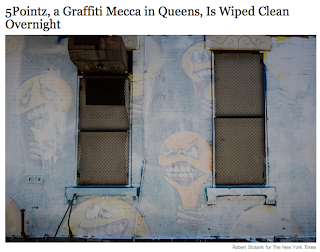 This is going to be polemical. To say so is somewhat paradoxical, because, as a space, 5Pointz was often not that. It was playful, whimsical, a mashup of different styles, texts, images, and references. Above all, it was a rare physical gathering place for graffiti artists and supporters of graffiti culture in a city where public space, public art, and public culture is increasingly privatized, sanitized, and individualized.

5Pointz, curated by Jonathan Cohen, otherwise known as Meres One, for over a decade, was a space that has been famous in and outside of graffiti culture across the world. Over the last two years Meres and the 5Pointz PR and education coordinator, Marie, and supporters, have fought an ongoing battle to maintain the space in the wake of the ever growing threat of gentrification.

This spring, plans developed on the part of the building owners, Wolkoff and his son, to transform the site into a high-rise condominium. Going from local zoning board, to planning committee, the Wolkoff's plans were greenlighted by the city even as they were vocally resisted by 5Pointz supporters.

Unfortunately, it seems like there is not yet a robust public vocabulary for which claim about the value of cultural life and emphatically public art can be intelligible against the calls to monetize and market city spaces. However, the contrast between 5Pointz being a PLACE versus it just being a SPACE, something Dr. Jessica Pabón signaled eloquently earlier this fall, has never been so clear as it appears in images of the building after being whitewashed in the dark of night.

It may seem a tad dramatic, but that a decision that implicates a collectivity, several communities, and the aesthetic commons should happen nocturnally reveals a great deal about the paucity of imagination that exists within dominant capitalist culture for accounting for places that hold meaning beyond exchange value. The whited out walls are not simply erased images, they are literal and metaphoric headstones for graffiti artists who have passed away and, for the most part, are not given general recognition in the annals of history.

One more space liquified, rendered smooth, and inaccessible, and relevant, to the few. 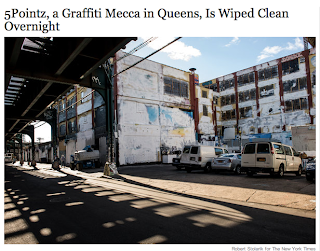 First, claims that graffiti's ephemerality justifies the destruction of the building writ large does not make much sense. Ephemerality is not the same as superfluity. Sure, pieces and burners may come and go but they constitute a visual palimpsest and an ongoing dialogue in physical spaces. The elimination of any space for public communication hollows out the fabric of possibility for such communciative action. Second, I can only hope that this spurs broader discussions about the vital need to create new vocabularies with which to ascribe value to urban spaces. Hopefully the arguments that have emerged in the course of the past few years have made visible to a broader public the importance of public art, and graffiti art in particular, such that more wall owners and communities will be open to providing space for the elaboration of graffiti art in New York. We need public discourses that account for the crucial role that public art plays as a vehicle for public affects: 5Pointz was a material space where love for a genre also culminated in love across differences.

My thoughts are with Meres, Marie, and all friends of 5Pointz today. 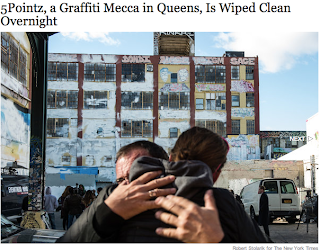