Swoon is a street artist based in Brooklyn, NY, who is world famous for her haunting ephemeral pieces, created using an iconic hand-drawn style, depicting human beings from all walks of life involved in a variety of activities. Her recent show in Paris, titled "Motherlands" and located at Gallery L.J. in Paris' Oberkampf district, offers a compelling transnational exploration of what it is to make a place a home, and how that process necessarily involves community. As such, the exhibit actualizes what affective citizenship, grounded in a feminist ethic of participation, dialogue, and engagement, can look like in spaces that so often take the edge off of street art-- an art genre that is intimately connected to its space of inscription in the street.

Walking down Rue Commines in the bustling 11eme arrondissement, which is full of boutiques, bakeries, and bars, one is struck by the figure of a four meter tall female figure rising from the center of a green, blue, and yellow space, intensely visible through wide glass walls. 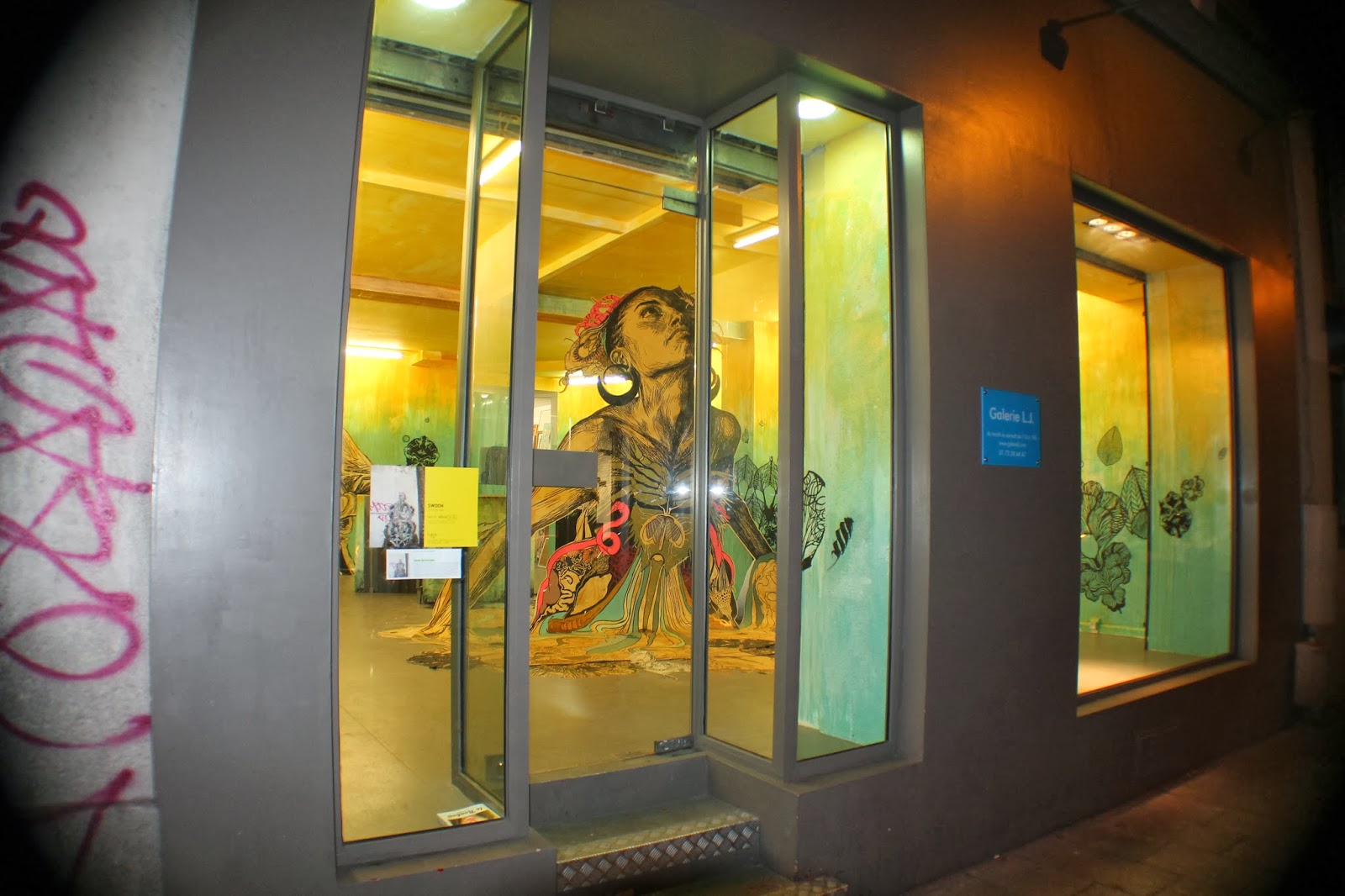 Entering the gallery, I became acquainted with the first figure in the series, called Thalassa, a female figure that is raised from the ground and holds open flowing robes, and also an open chest cavity. The piece is constructed from different kinds of paper, gauche, and string, painted on both sides, and lit from within as well as without by the ceiling lights. With her face raised to the sky and arms connected to the earth by rhizome like root structures, the woman evokes mythologies of Gaia and reclaims narratives about woman's connection to fertility, fecundity, and the earth. The textured green, blue, and yellow wash that colours the gallery space reinforces this naturalistic approach. 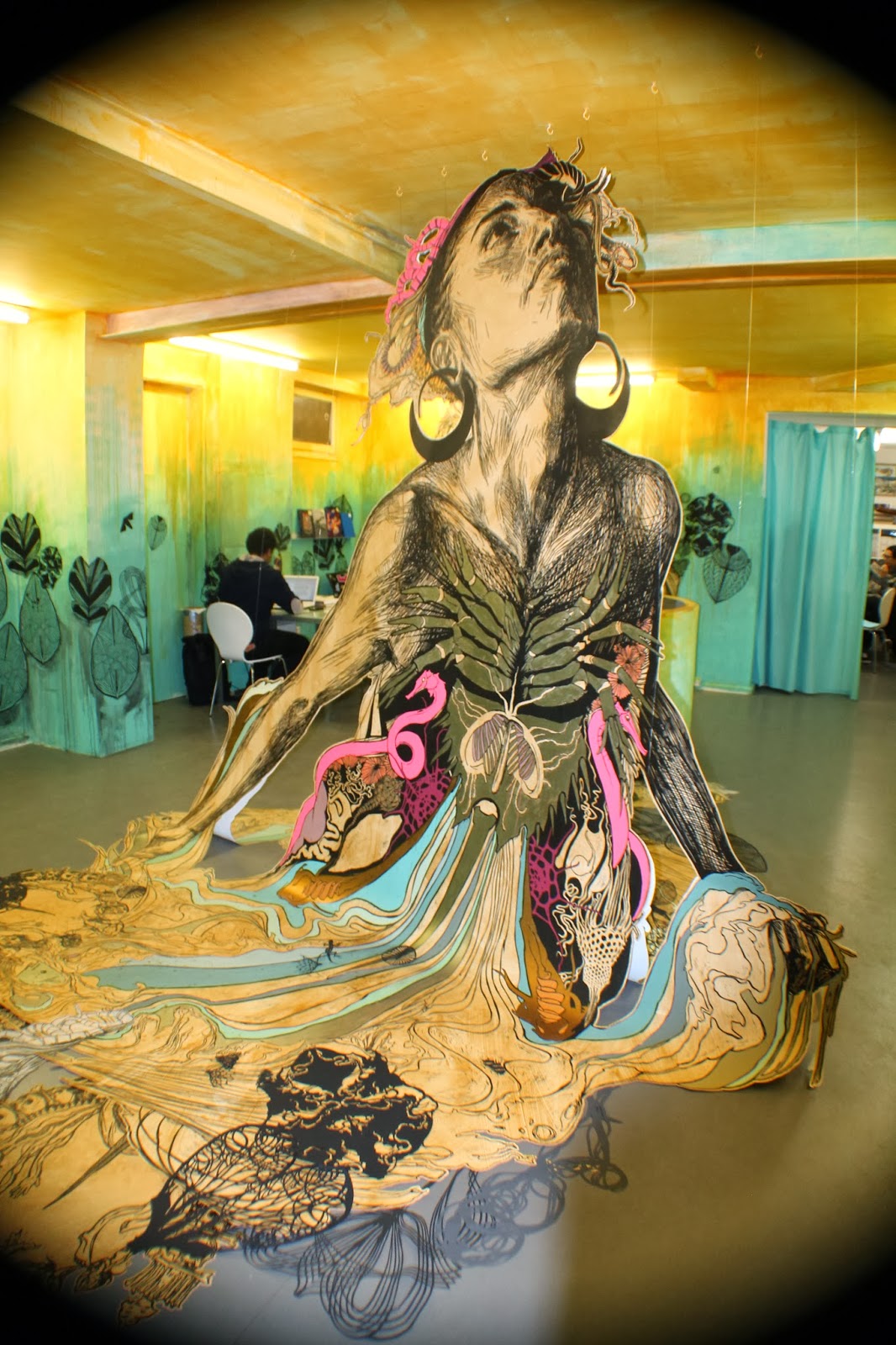 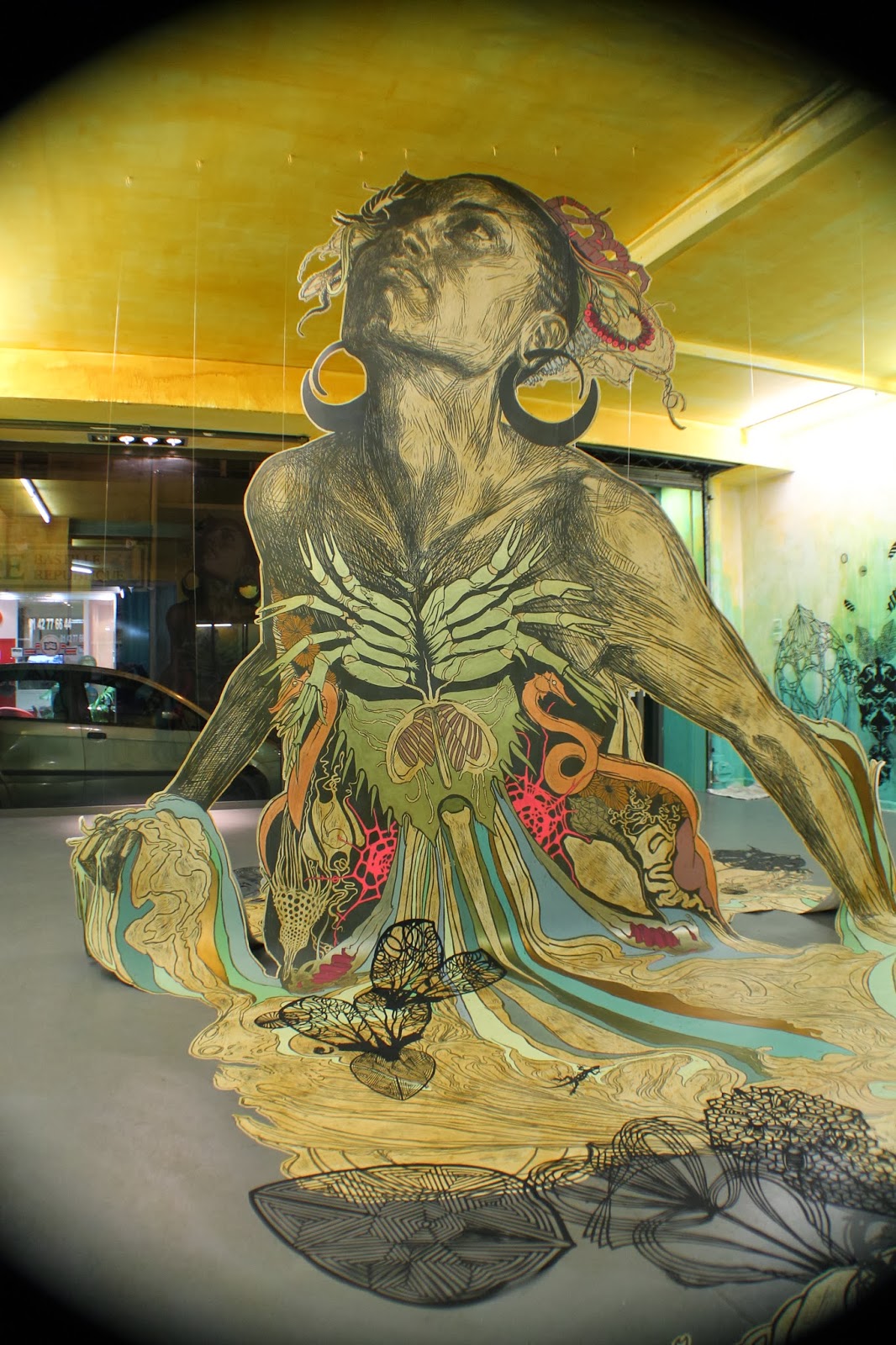 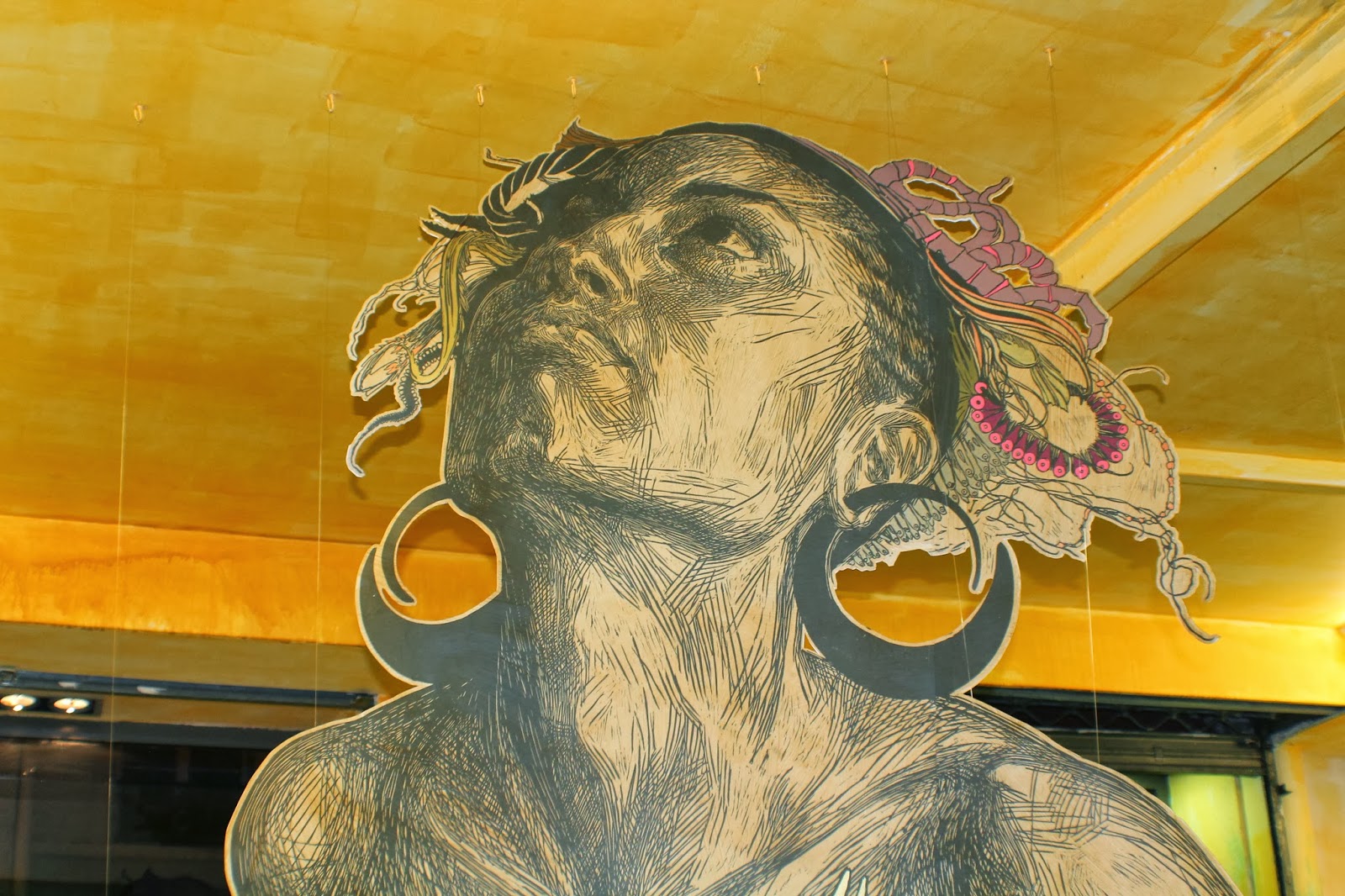 The rest of the exposition can be found by walking down a spiral staircase into a basement. The walls are rougher here, and the light is not as bright. Each assemblage of characters is lit from within, and situated within distinct architectural spaces. 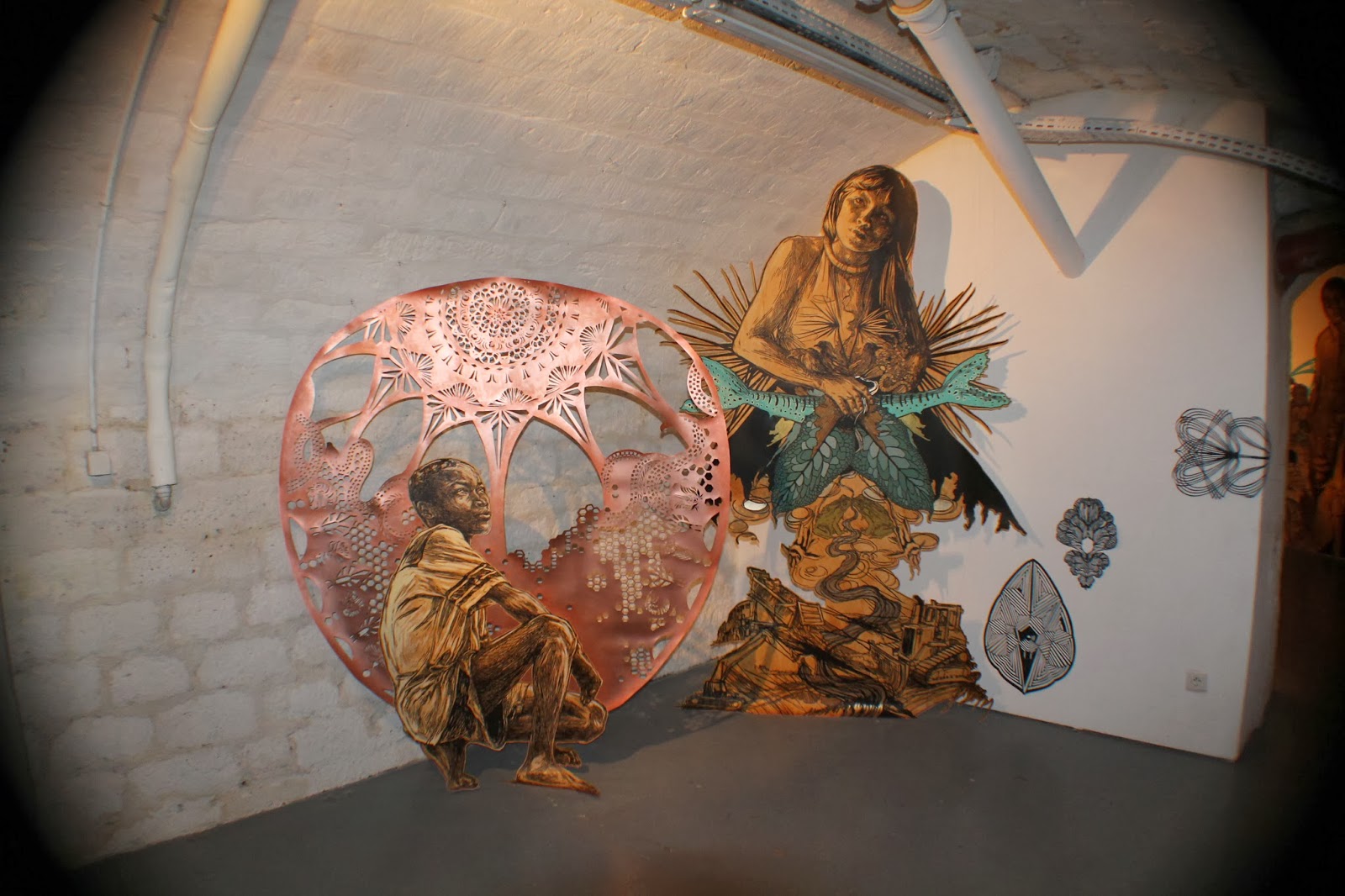 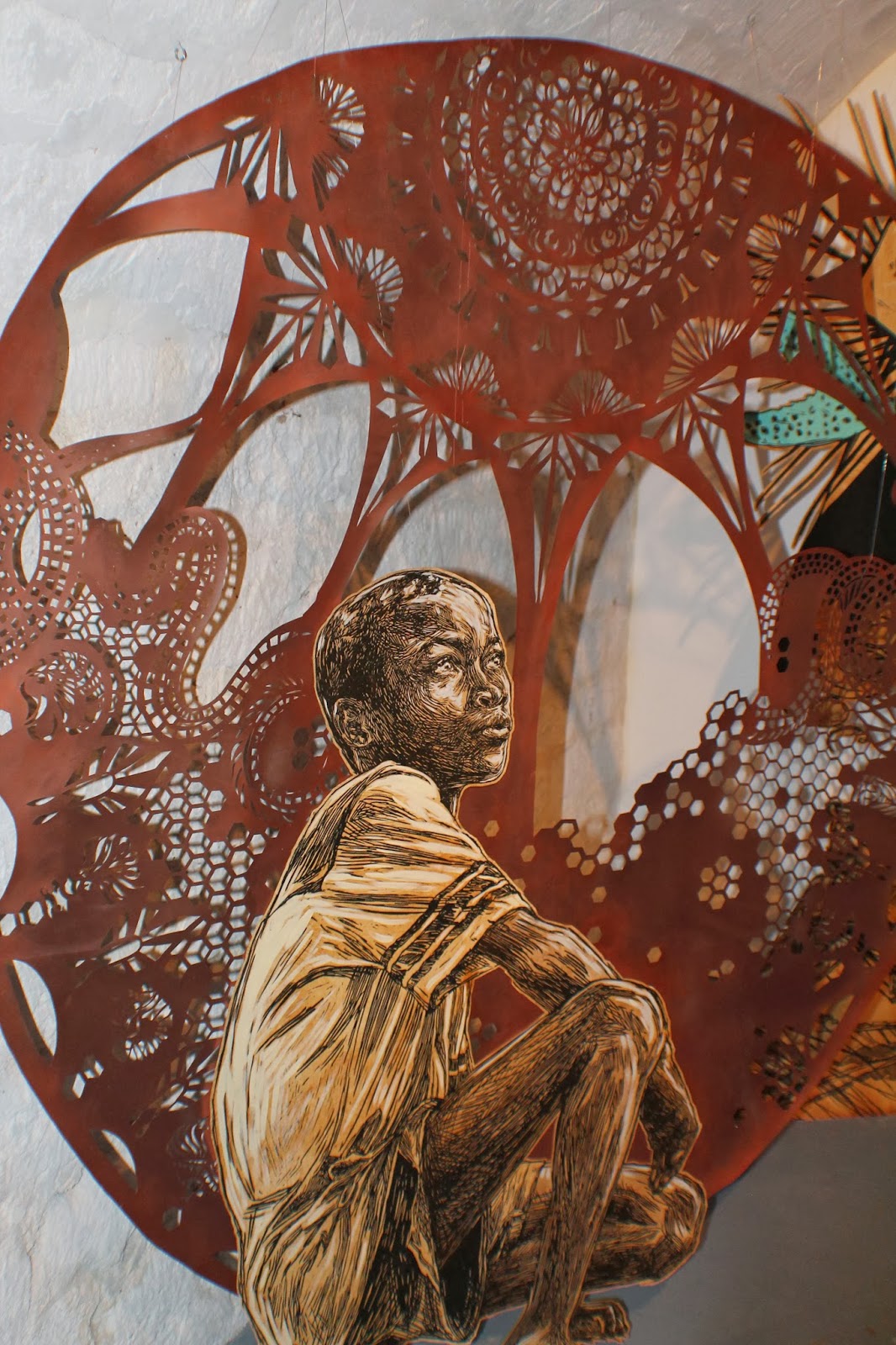 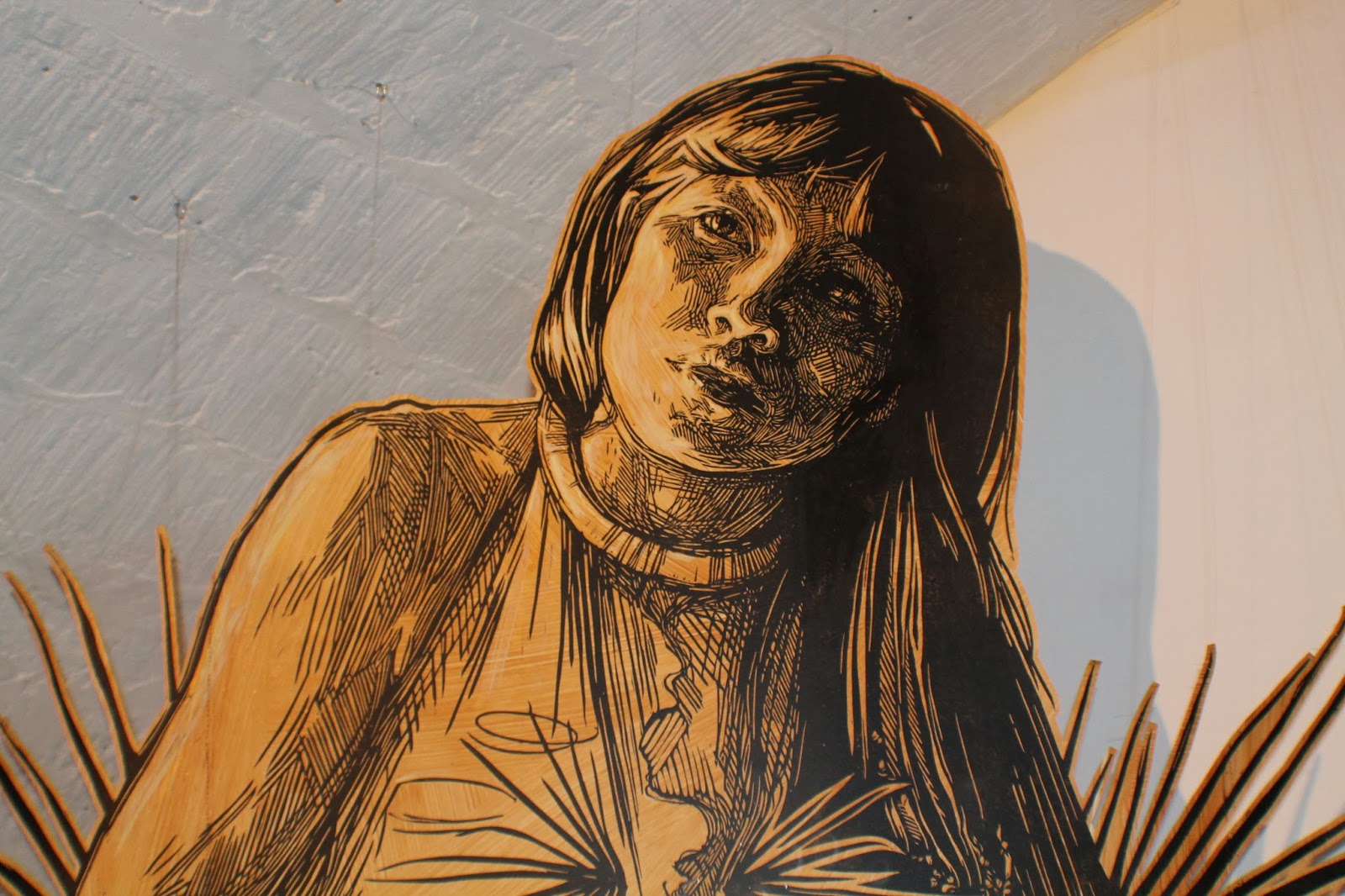 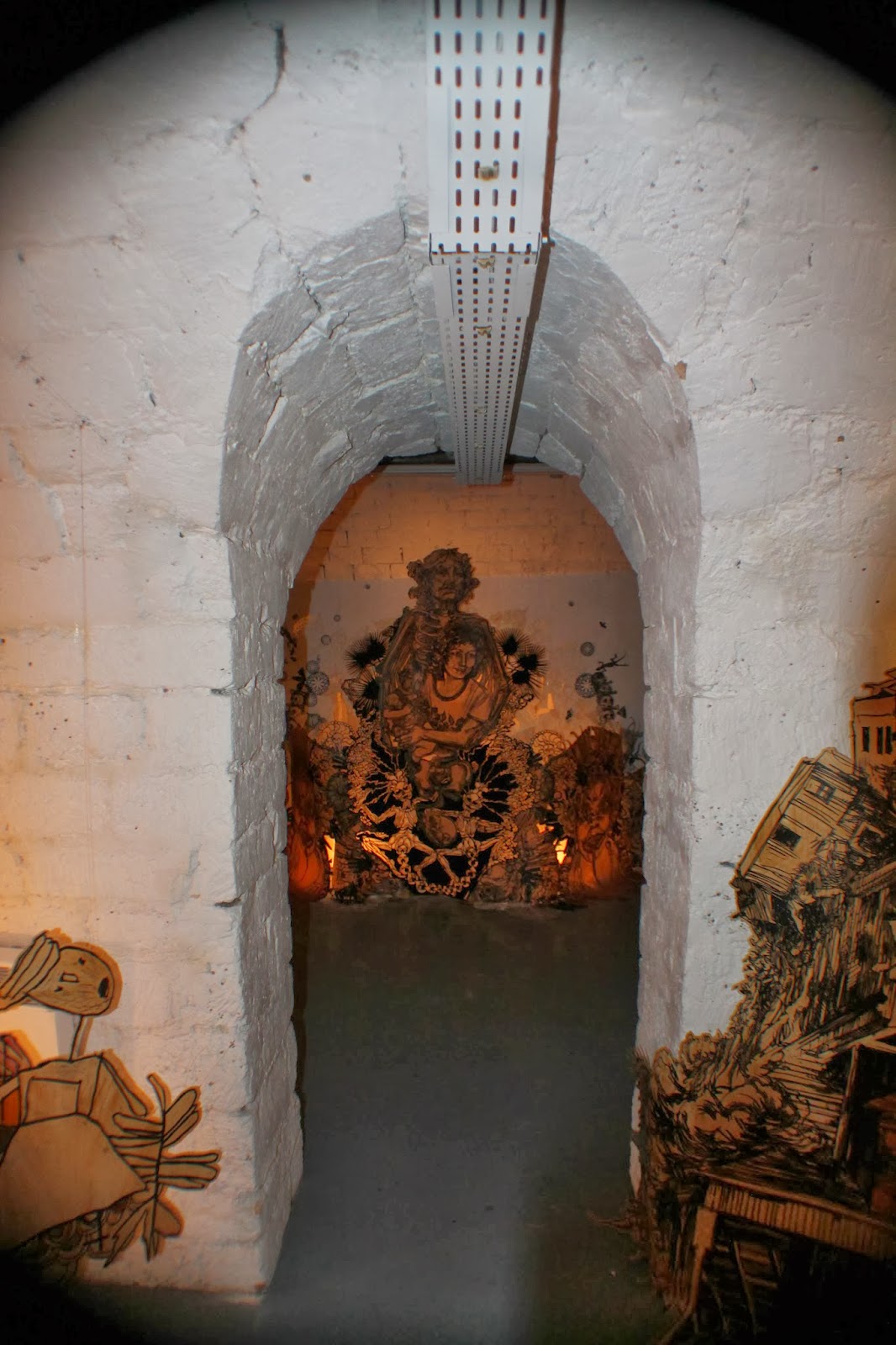 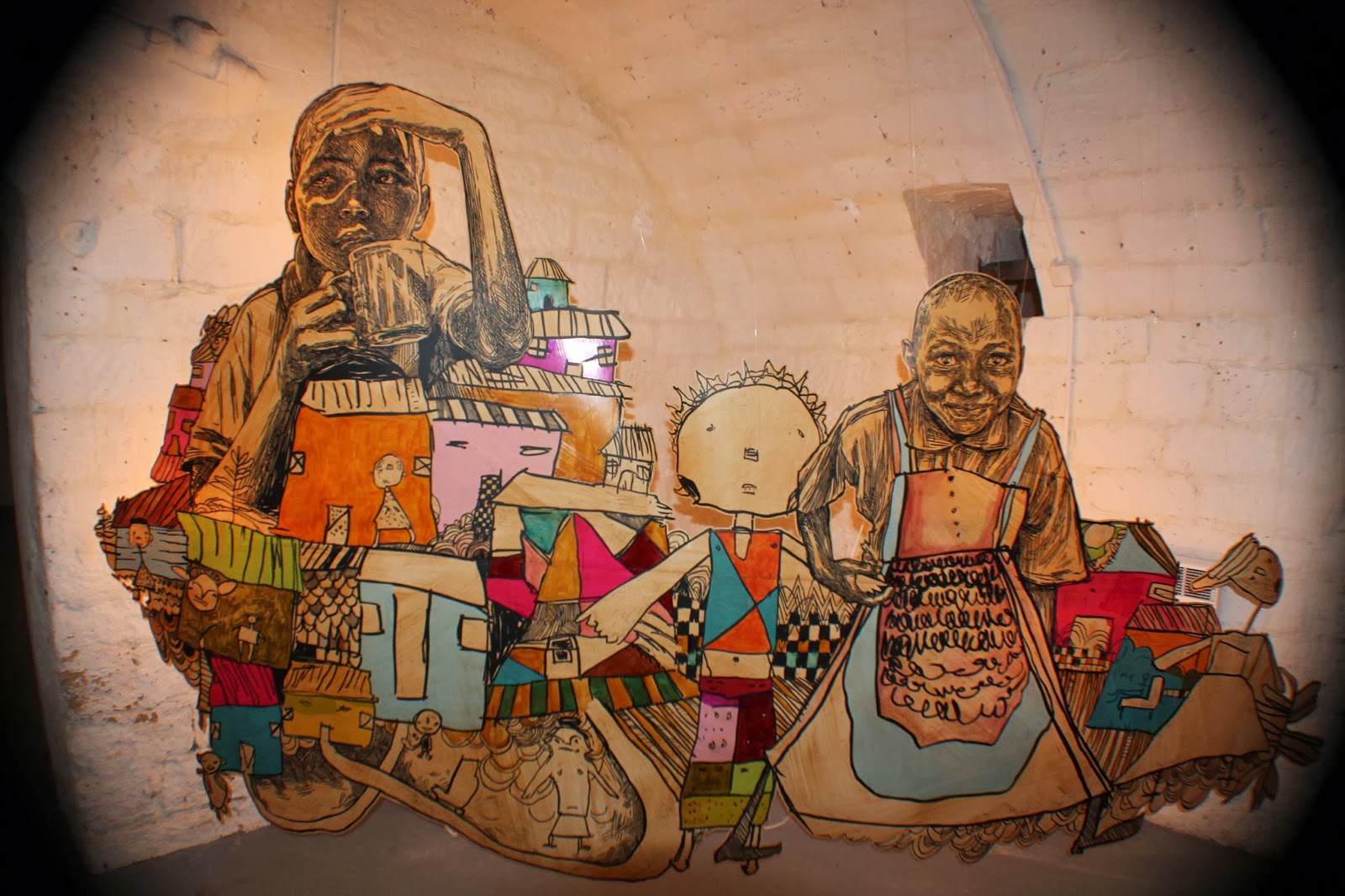 Having grown up in New York, and recently visited Paris' catacombs, I am drawn to histories of urban places where the earth below is used to build visible above-ground landscapes. I noticed in a pairing of three larger figures, putting flourishes on buildings that contain smaller figures that are artisans and workers, that I was confronted by familiar architectures: that of Braddock, Pennsylvania, a former mining town proximate to Pittsburgh. 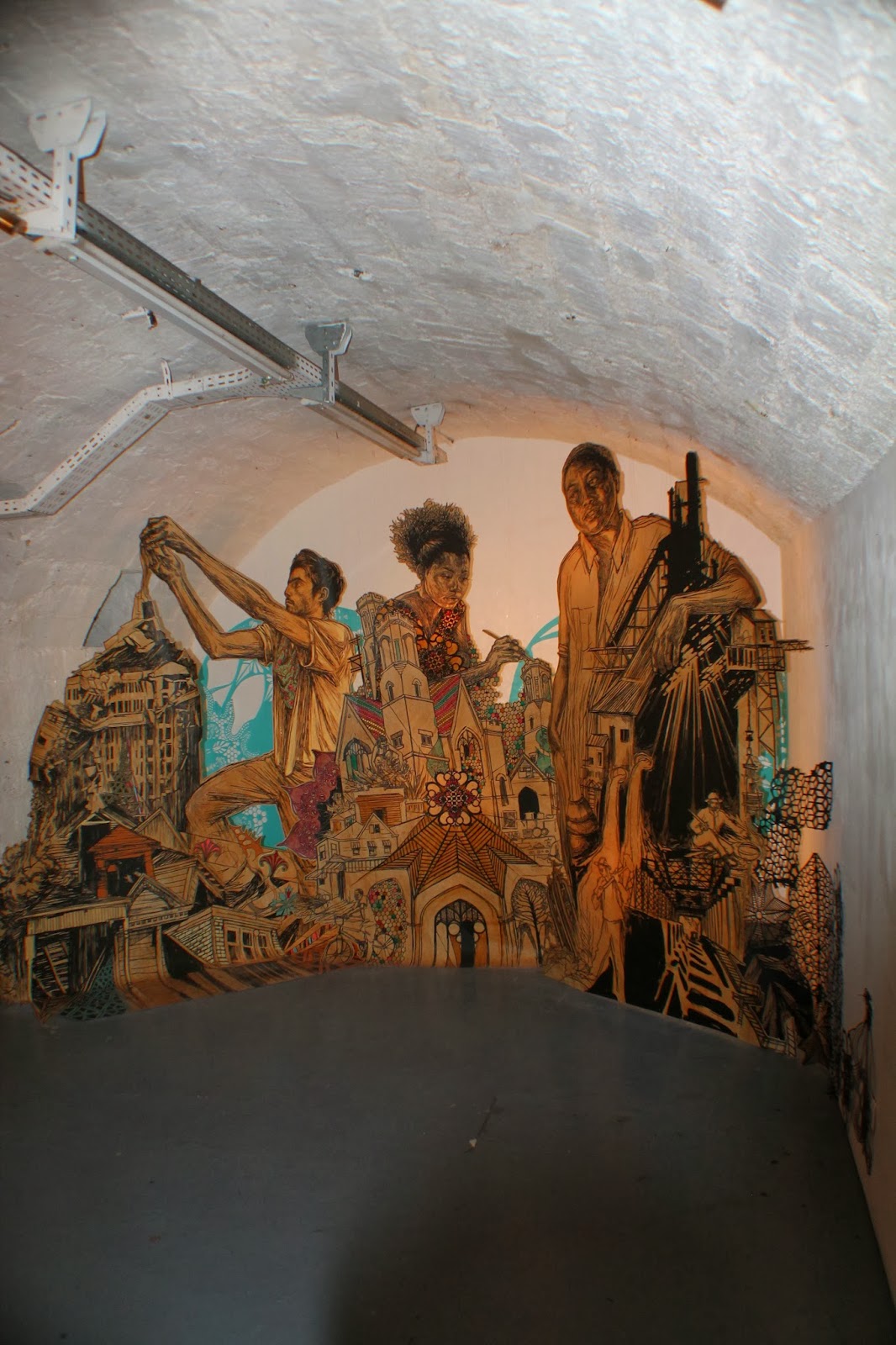 All three figures work to paint and shape buildings that are in different states of use and disuse. The figure on the left called "Ben," puts the top back on a decaying art-deco building (referencing the spaces of Detroit), while a woman paints what looks like a cathedral. 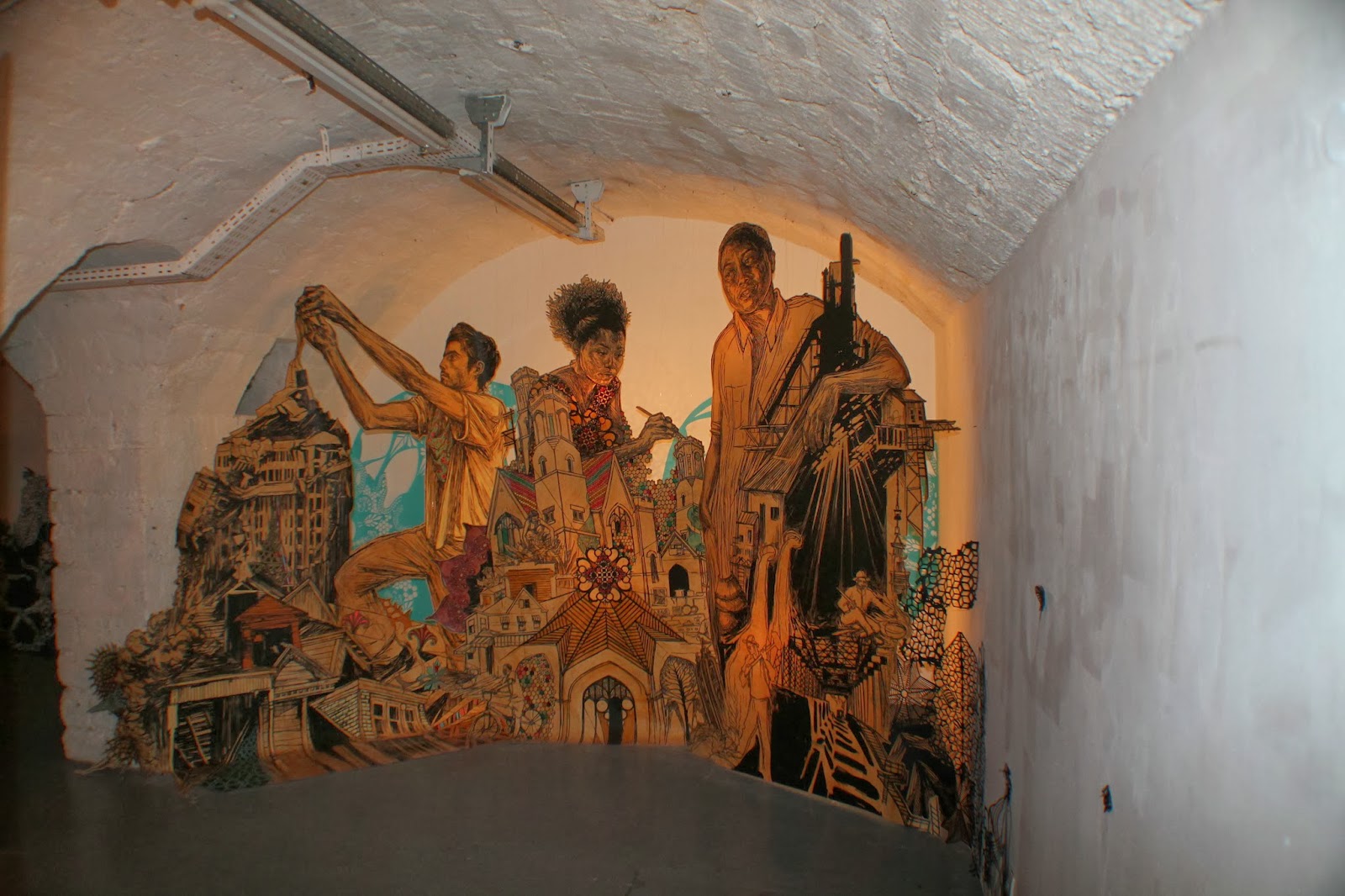 The figure on the far right, embracing a black structure, the stylized markers of support beams for a tunnel, points to the love due to figures who, in the darkest and most threatening of spaces, gathered the materials that created our cityscapes. 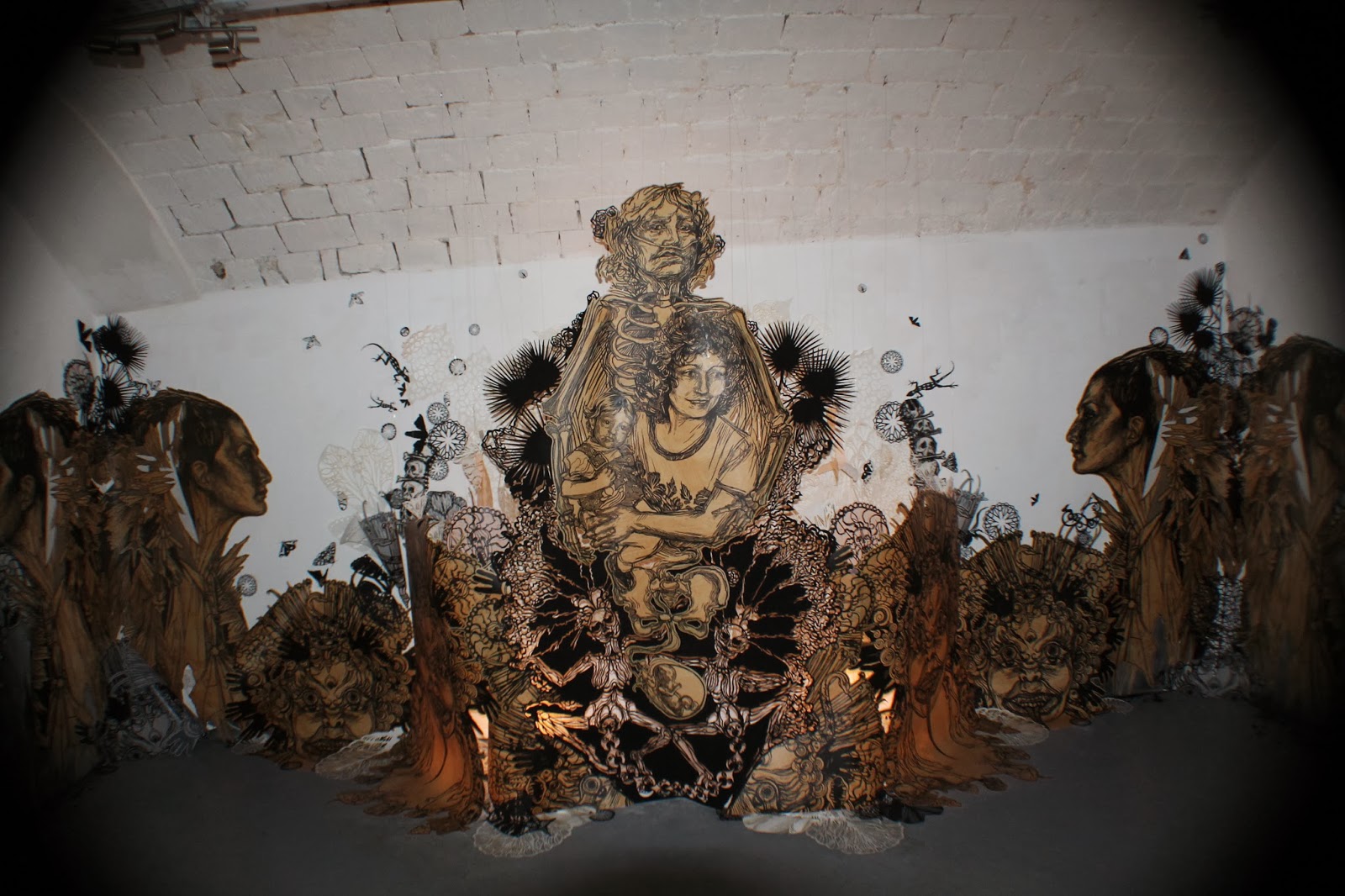 Yet, Swoon also emphasizes the relationship between land, maternity, creativity, and death. In the third room a skeleton embraces a woman while smaller skeletons dance below, birthing more figures of death. Ominous, but beautiful, mortality haunts scenes of life as its intimate counterpart. 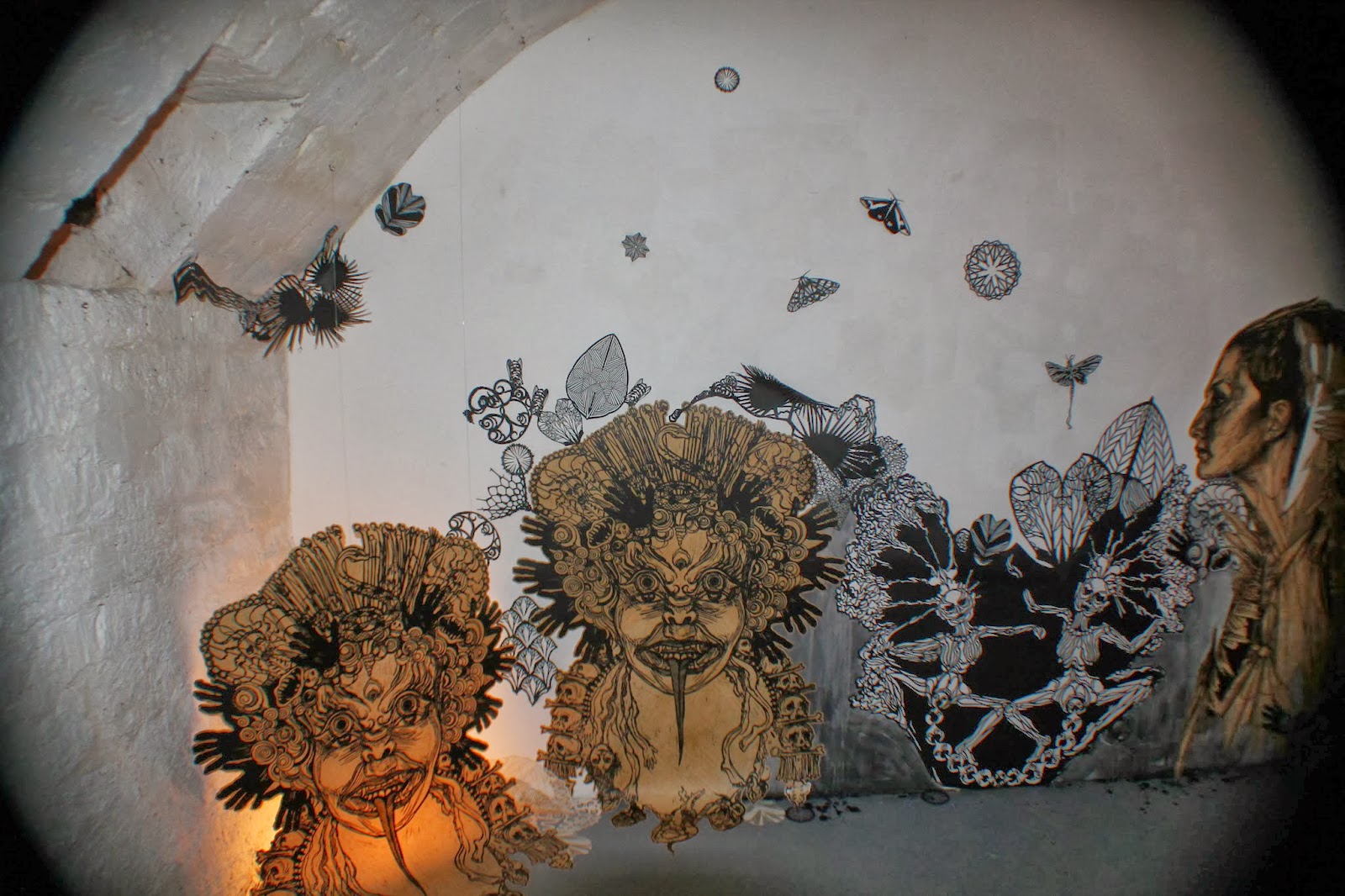 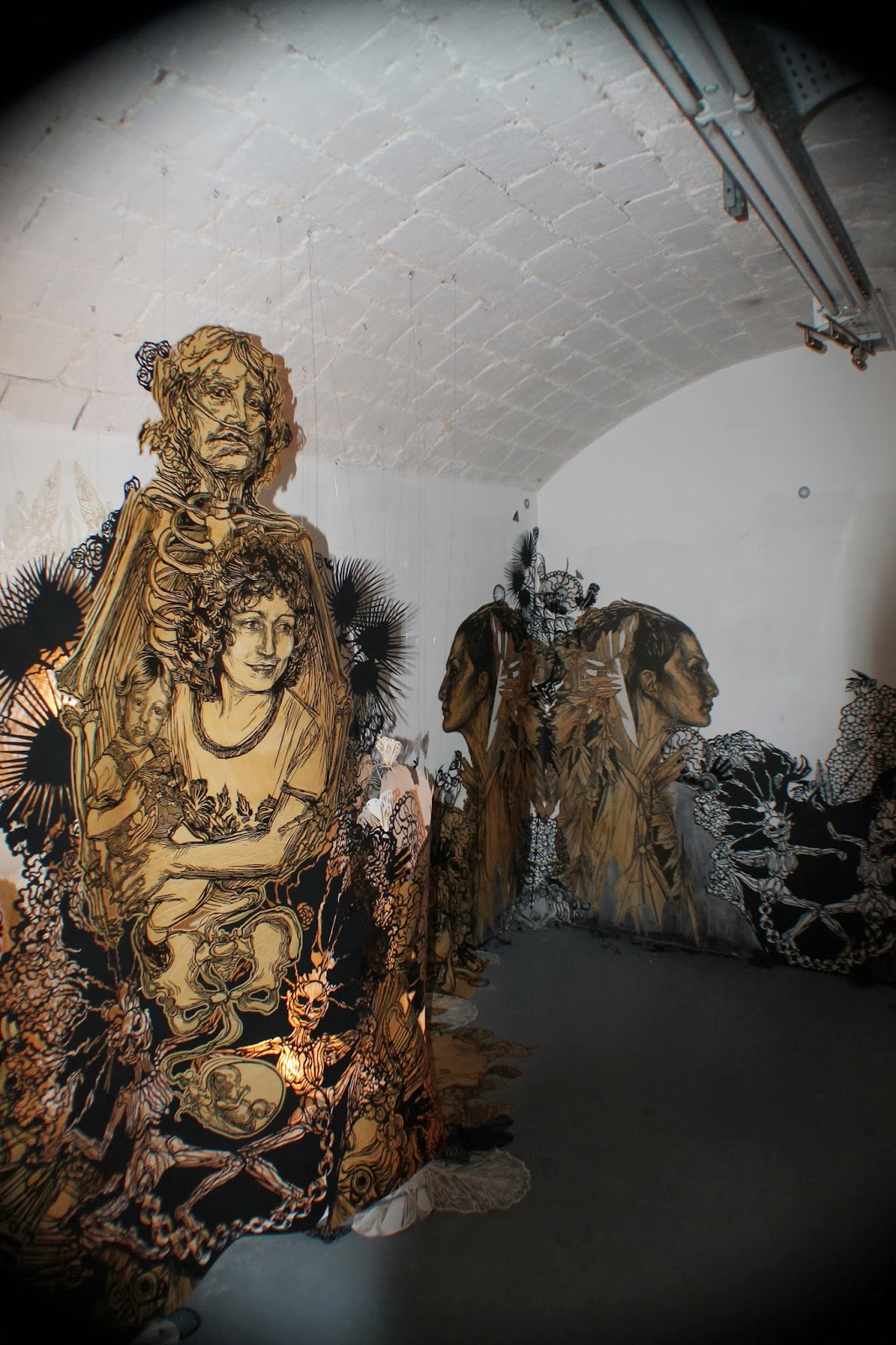 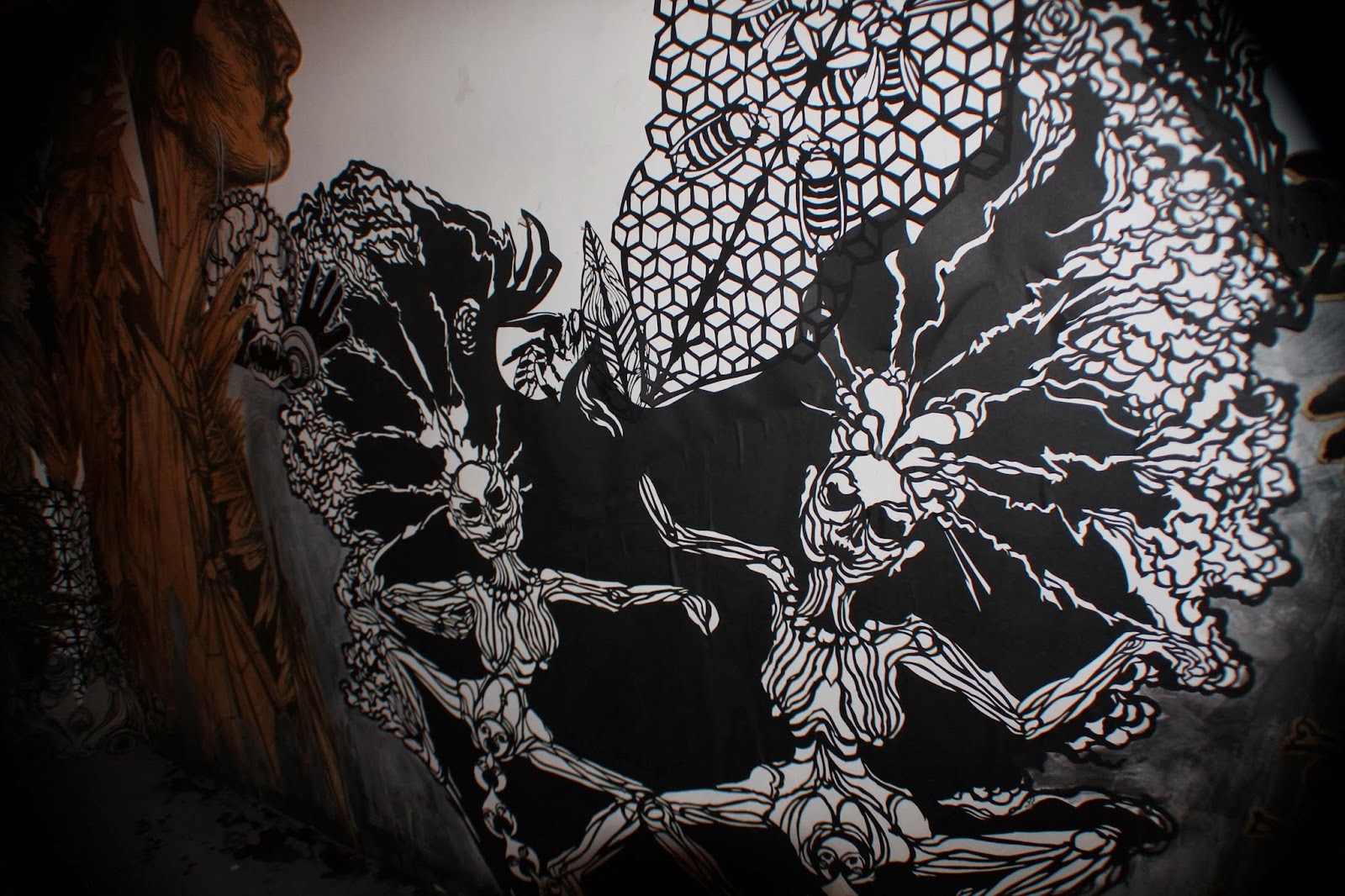 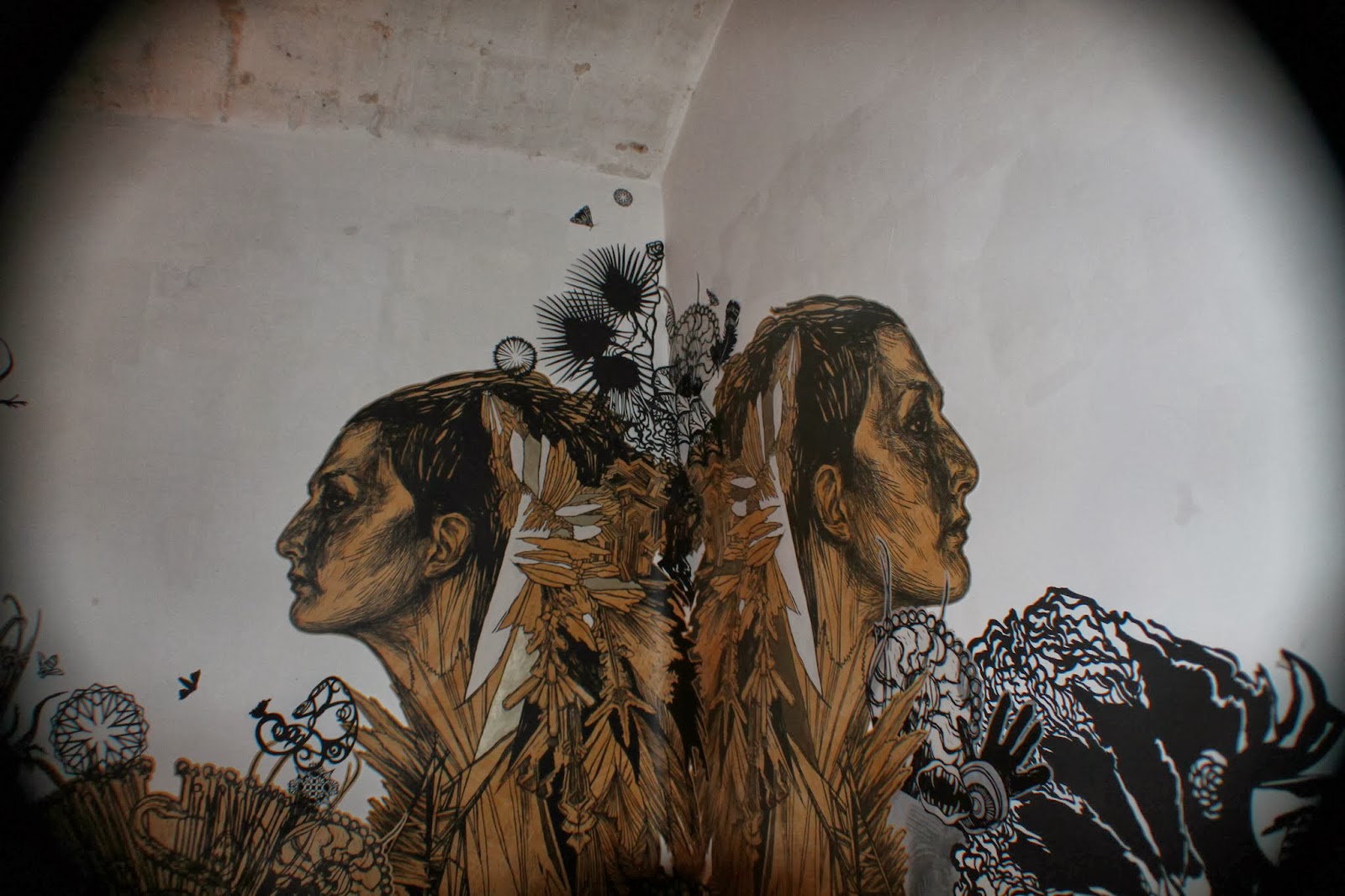 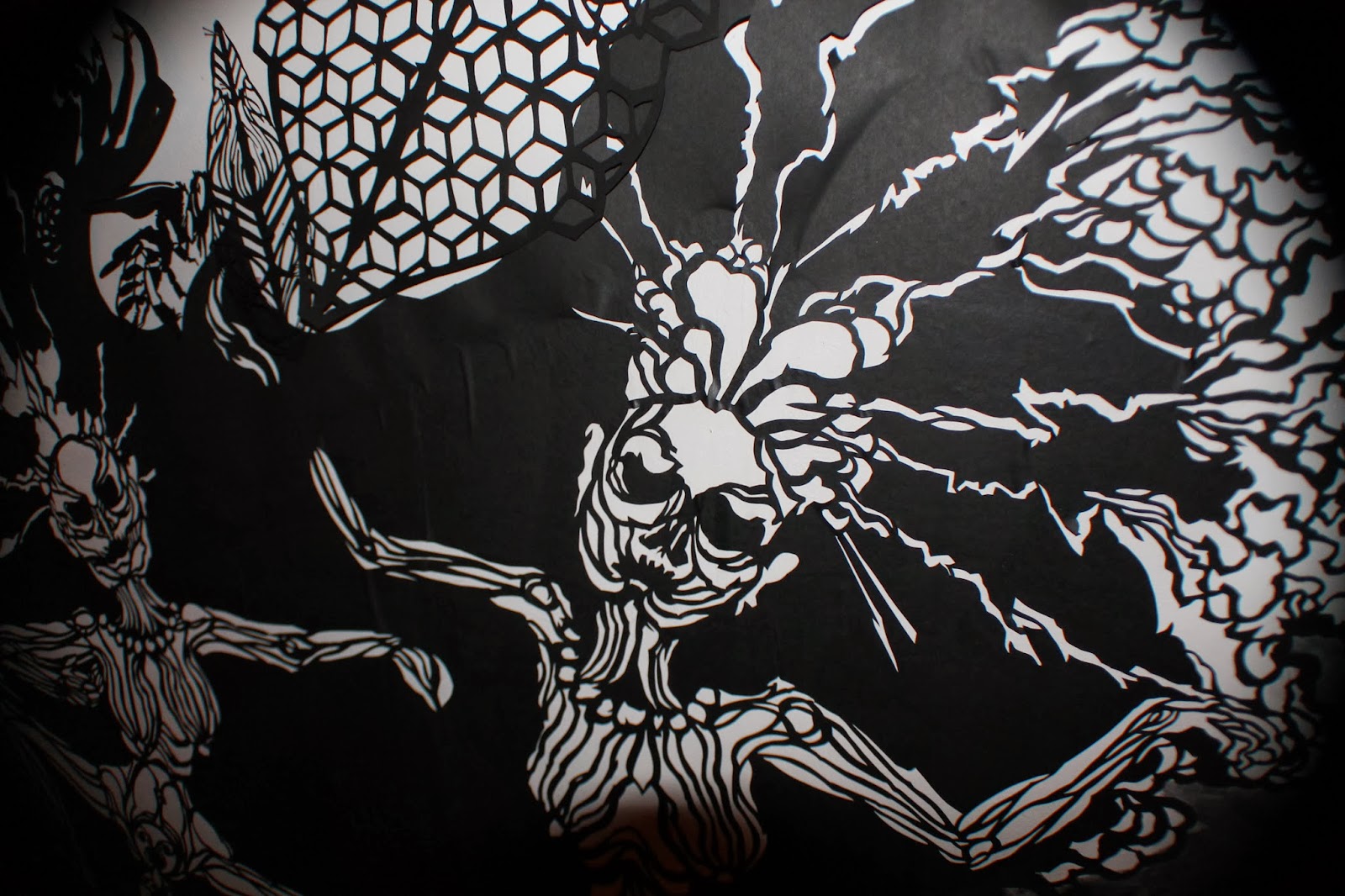 The series is made up of work that Swoon has created during the past three years, and draws from the people, spaces, and collective issues that framed her interactions. Moreover, the passing of her own mother in 2013 provides a poignant emotional background to the displays. Her aesthetic, which is based on constituting art that can decay, that grows and also dies in urban spaces, celebrates the beauty that such vulnerability can create. The embodied experience of walking around and with her various figures imparts to the viewer a sense of the simultaneous universality of human relations that involve creation and destruction, and life and death, but also the particularity of each of her characters, temporary actors on a stage of public life.

As an artist that chronicles these stories, Swoon produces aesthetic scenes that inform viewers of the connections between spaces, ecosystems, and practices across the globe. The affective impact of the work is a kind of pedagogy that works to attune the viewer, on leaving the gallery, to the vulnerability that constitutes social scenes. A kind of affective citizenship, using emotion as a form of collective connection, vulnerability and ephemerality as a condition and limit for communication, and plurality that creates an imperative to keep working to engage with new and always-changing social scenes, Swoon demonstrates how public art offers us an optic for human interactions that can tend towards the curious and the humane, instead of the easily digestible and the fixed.