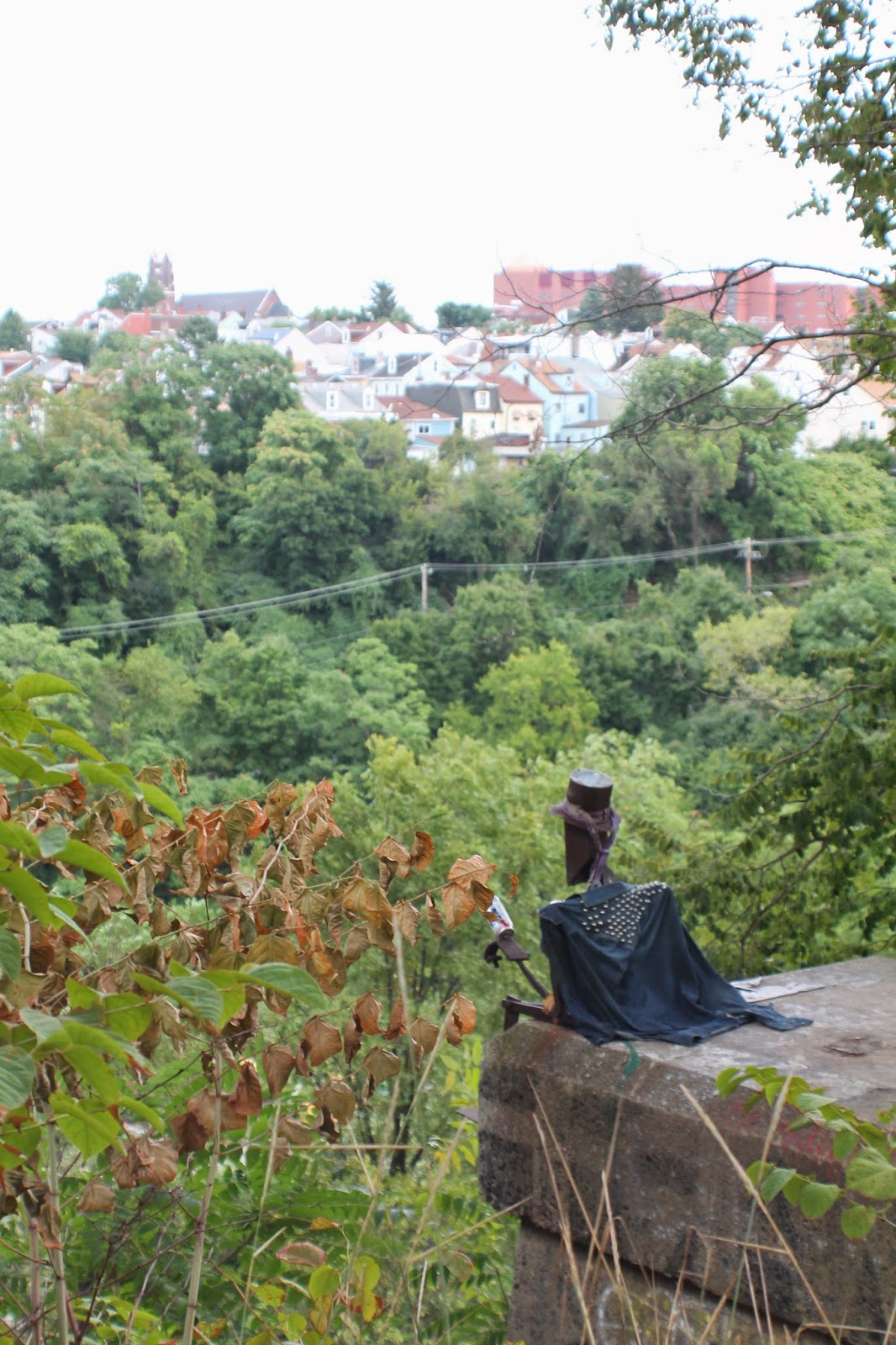 Moving to a new institution is interesting because while many things stay the same (student questions, academic communities, and carving out time for life sustaining activities like eating, exercising, and bathing) the frame shifts, and for me, that frame is the city.

Pittsburgh is weird. It has counterintuitive driving and public transit practices. The "Pittsburgh left" is an (illegal) convention that offers a courtesy left turn when normally those going straight have the right of way. No bus I have been on opens the back doors, and even more perversely, during rush hour one must pay at the front of the bus on the way out, creating a clusterf__ of crowding, crankiness, and inefficiency. French fries are sprinkled on salads with wild abandon.

And yet, it is also a small enough place where one can go to another neighborhood in under ten minutes, yet large enough that there are often several cultural events taking place on the same weekends, and these events are packed.

It is no surprise, then, that Pittsburgh's graffiti culture is difficult to access, not immediately visible, and unevenly inscribed from neighborhood to neighborhood. This past weekend my partner and I decided to walk around a road that curves around the middle of the Polish Hill neighborhood and empties out near the Bloomfield Bridge. We'd seen higher concentrations of graffiti driving through, and like most things Pittsburgh, an exterior look is not sufficient.

We first tried to park on a turn off area and were foiled, learning that these indents were in fact steep inclines, not hospitable to our little Hyundai. Instead, we parked in the residential street at the end, or beginning, of Golden Way. This too was complicated, as we learned, from residents heading out for the day, the neighbors ahead of them were very "particular" about having cars parked in front of their house. We were baffled, since it was a city parking area, but, as non native Pittsburghers and non Polish Hill residents, we tried to oblige. To be a pedestrian along Golden Way, one walks under a bridge, and behind the rail guards on a narrow and curving two way street. We were first greeted by a man made of metal, perched on an outcrop and surveying spatters of paint on the opposite side of the bridge support, was well as peering over a vista of Bloomfield, Children's Hospital prominently visible on top. 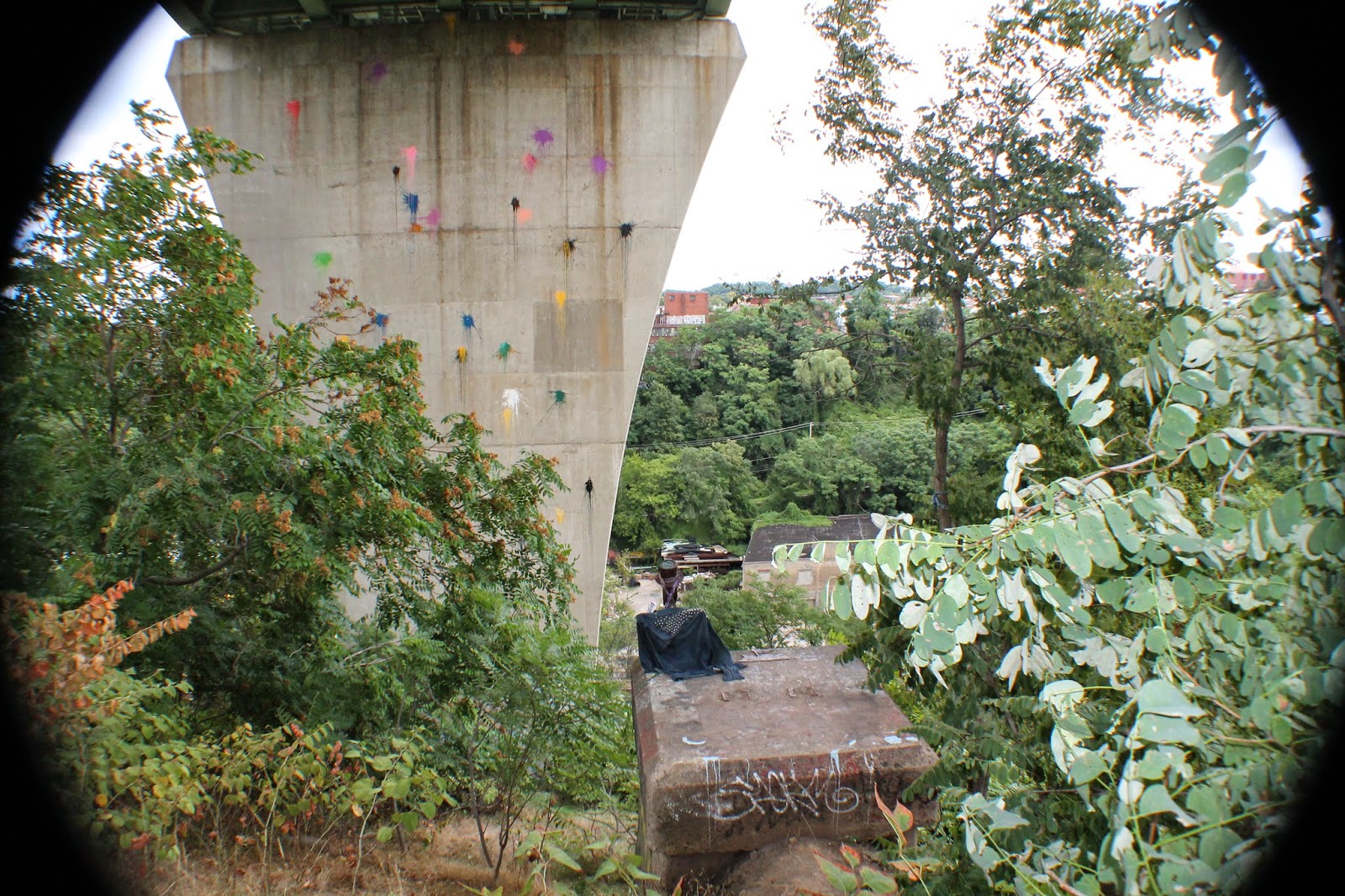 On the inside of the guard rail were cryptic and not-so-cryptic inscriptions: "Sally got a big butt," "MeaL," "No Shadyside in Polish Hill." These markers underscore a tacit sensation that one may receive as an outsider in the neighborhood, which is that the lines between inside and outside are emphatically drawn. Due to the geography of the neighborhood, perched atop a steep hill, and the political economy of the city, one that means only one bus runs there, Polish Hill is fairly isolated. It is also more affordable than Shadyside, a more gentrified and clearly bourgeois neighborhood, and so, the sharpee declaration illuminates class tensions and anxieties in a city that is also on its way towards more extensive gentrification (see Lawrenceville for a clear map of this). 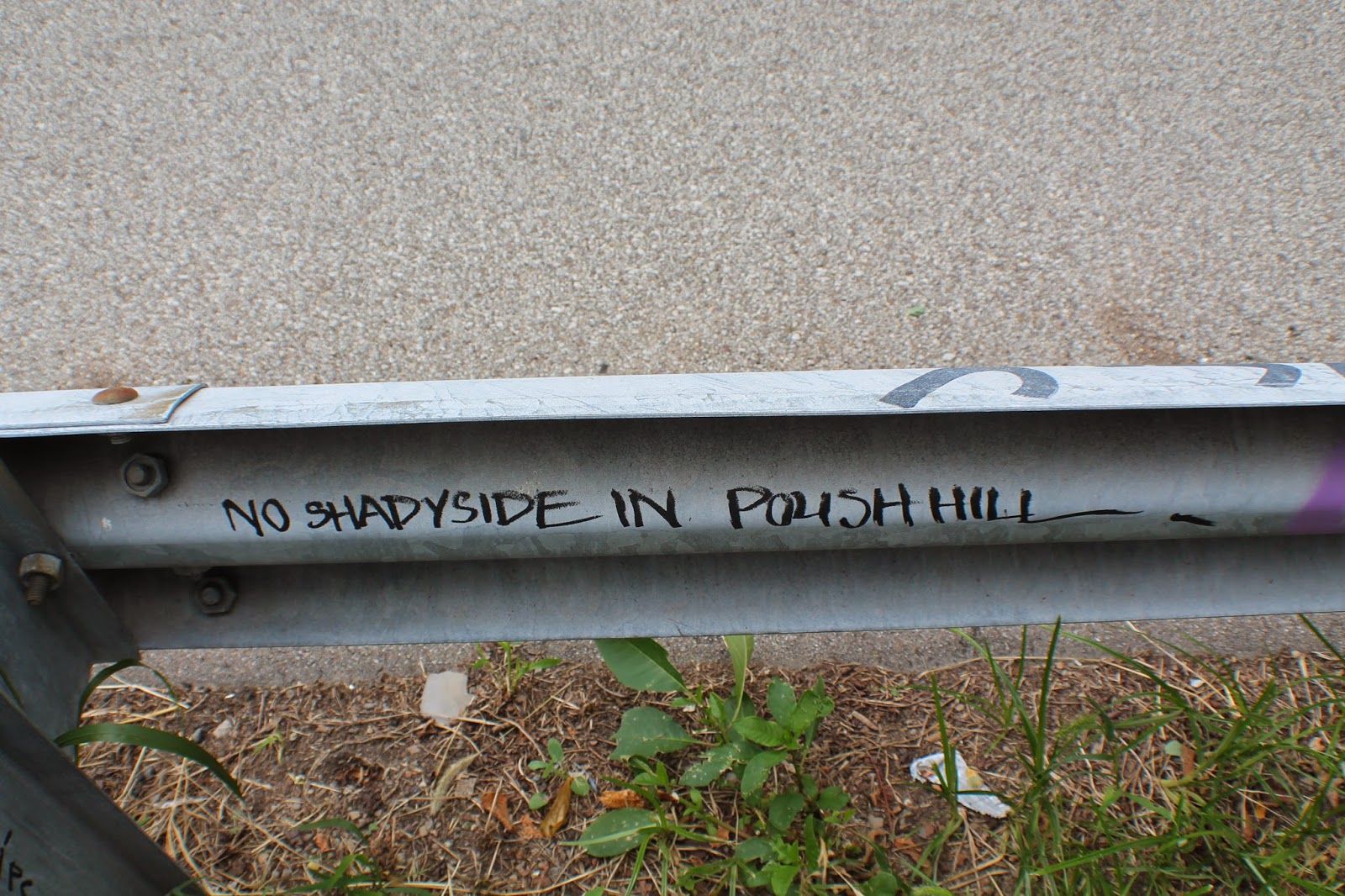 This warning was situated across from another territorial marker, a large POLISH HILL throwup made with paint rollers, its angular, flat style mimicking the many industrial zones in Pittsburgh itself. Directly in front of the informal sign was a small formal metal one with a butterfly and arrow pointing directly at the underpass reading simply, "No Spray," a formalized reminder of graffiti's contested terrain, even, as a part of the wall reminded the viewer, "SO many years of great art." 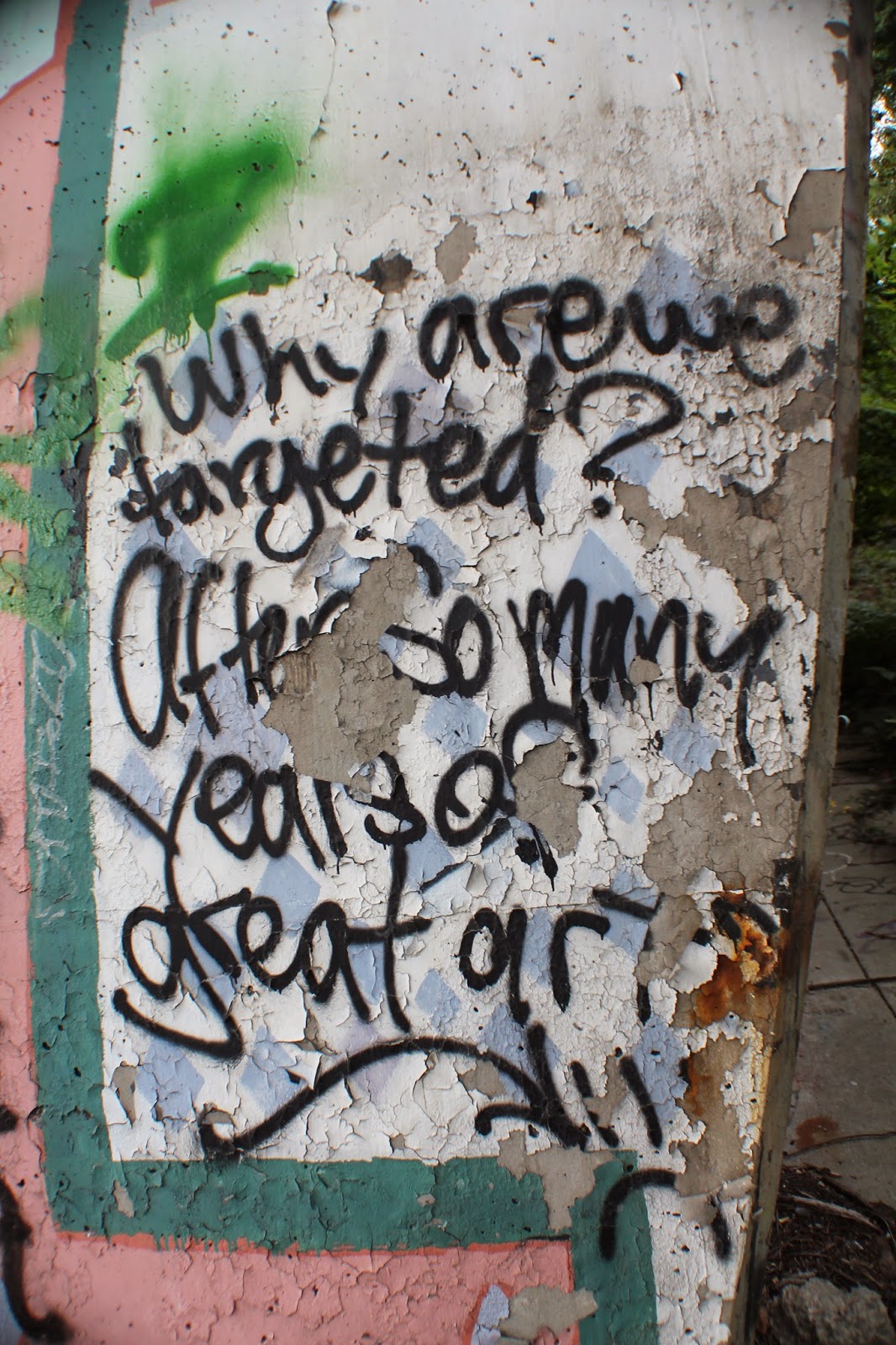 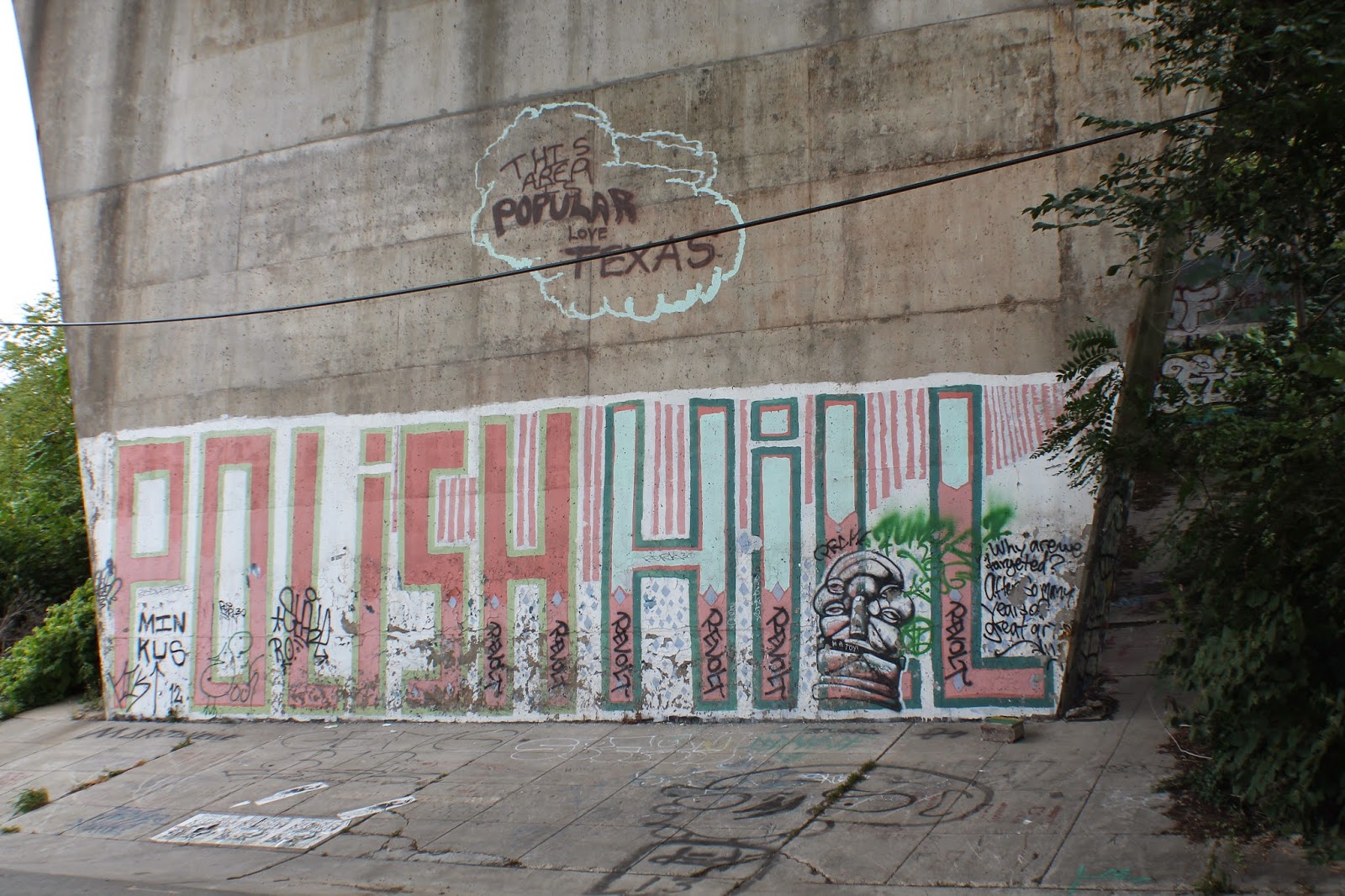 This area was complex, with the two sections of underpass behind it covered floor to ceiling with tags, throwups, and some small productions. The rush of cars overhead contrasted with the silence of the space, a silence perforated by the crunch of leaves, beer caps, and paint flakes under our feet, created a sensation of being in a holy place, a shrine of sorts. This sense of intimacy and also trespass was exacerbated by a ground inscription we found, a letter painted in white about an abusive partner, illegible in certain parts, and ghostly. 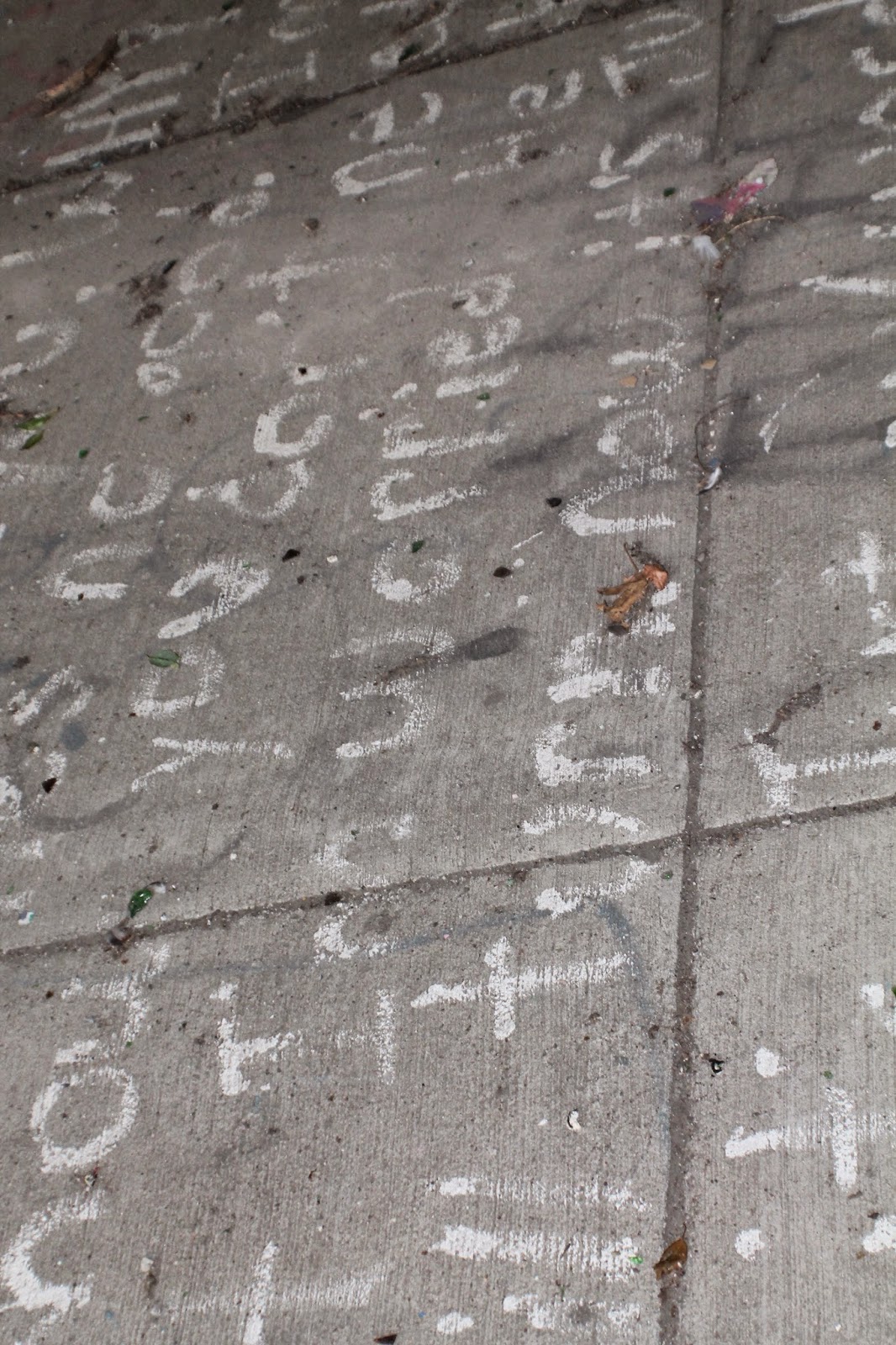 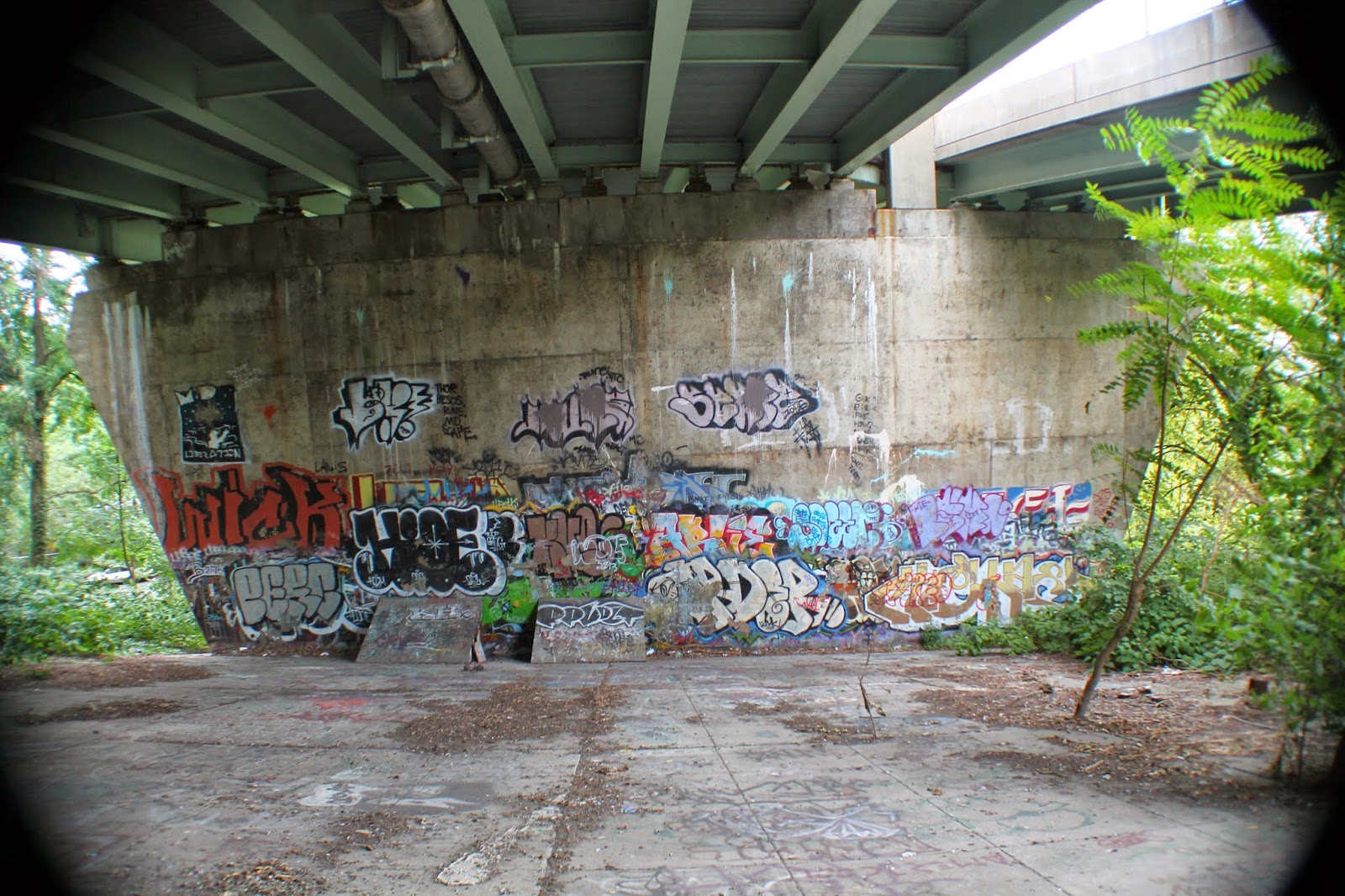 Another fragment of history was a little farther up, behind a car place leading up to the bridge itself, a crumbling mural possibly from 1997 that showed a cauldron of steel pouring down and bubbling with fire to reveal writers' names. This concrete lot seemed like an ideal place for an impromptu breakdance competition, or just quiet painting. 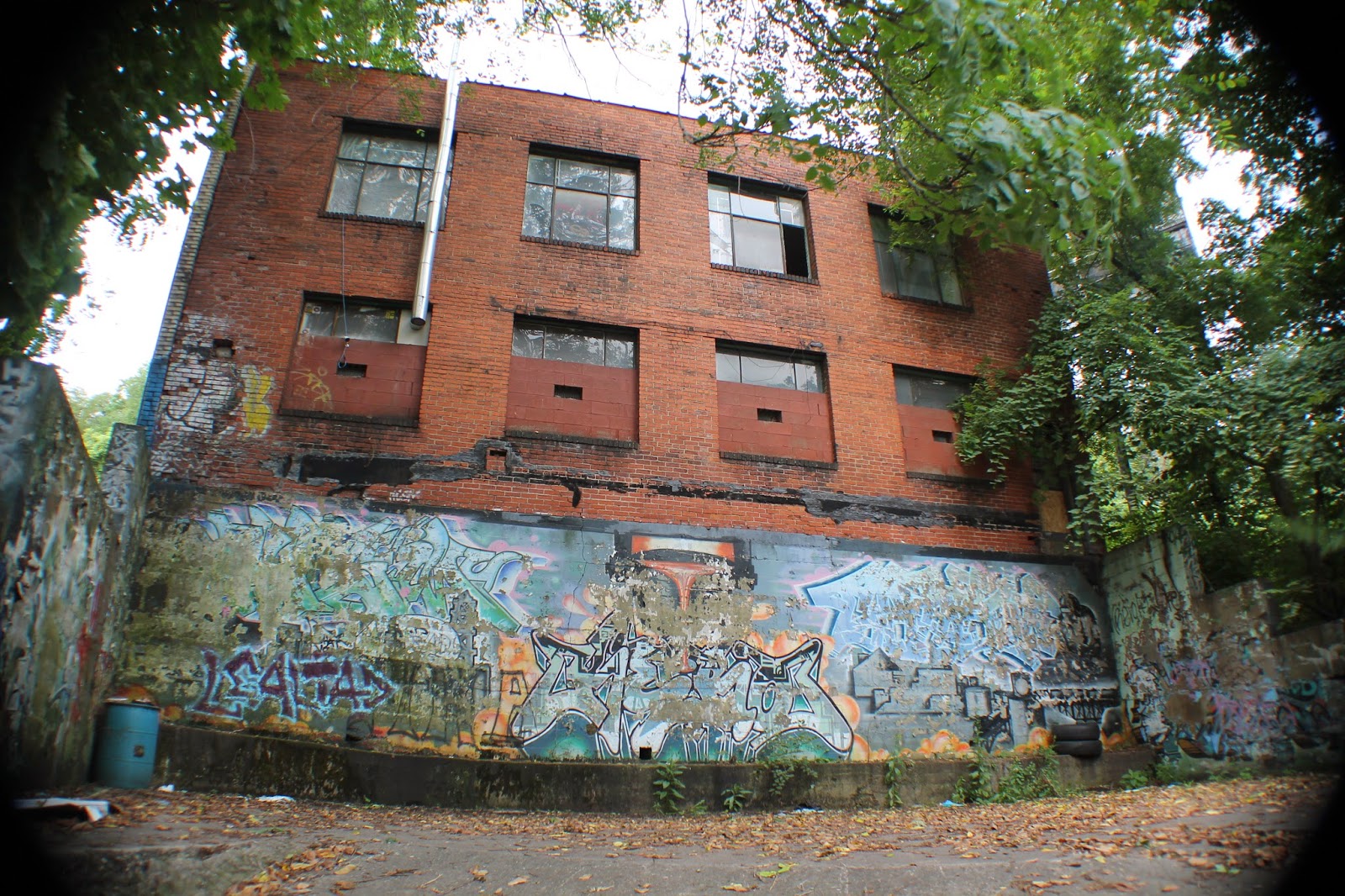 This short journing, beneath and behind the more visible sign of neighborhoods, underscored the importance of realizing that much of the work of "creative" populations is done under the radar, and not for a general public. In contrast to the intensely publicized Unblurred art crawl in Lawrencevill, or Gallery Night in the Downtown, Polish Hill's undersides are another space to engage the city, with quiet breath and sturdy footgear.
Posted by Caitlin's Blog at 3:15 AM