I had the great fortune to attend MOS México in Mexico City this past weekend, the final of three MOS events in the country. It has been two years since I have been in the city, three since I have attended a MOS event there, so it was a pleasure, and fascinating, to see how the graffiti scene continues to evolve stylistically, but also with respect to its relationship to institutions and the media.

The first MOS this year was in Monterrey, then in Guadalajara. In Monterrey the event was intimate, and involved only 40 writes, taking place in the Monterrey subway "The first time a city has invited writers to paint near the trains!" organizer Gerso commented. In Guadalajara, on the other hand, it was a massive event, with around 170 writers on a wall that was a kilometer long. In Mexico City the event was more decentralized, taking place in the Zócalo, in the middle of a book festival, the Museo de la Ciudad de Mexico, Calle Regina, Calle San Jeronimo, Metro Garibaldi, and Fray Servando Teresa de Mier. These seven sites, located around the Centro Historico, are fairly easily accessible to each other by foot, and yet, and also fragmented, each in very different kinds of places.

At Zocalo the artists were located in the middle of the square, with the Palacio National and Catedrale as stunning backdrops. In addition to the thousands of tourists who visit the site, the artists were also observed and greeted by visitors for the massive, week-long book fair being held in teh plaza. On Regina, on the other hand, one wall was in the middle of the pedestrian-only street, across from restaurants, and the other was a local playground with a mural of the Familia Burrón on the front. San Jeronimo has a sculpture garden and fútbol park, but also a more solitary street near the Sor Juana building. Finally, the Belgians at Garibaldi had to contend with the hustle and bustle (intense bustle) of the Mexico City metro system, while writers at Fray Servando Teresa de Mier were left in relative solitude, accompanied by the whish of cars on the major thoroughfare, and the hawking via a megaphone installed onto a truck: "BOTONES....BOTONOES!" "SNACKS...SNACKS!"

Even so, a sharp contrast to the MOS I attended in 2011 was this very central location. Until 2012 the festival took place in suburbs, often in Nezahualcoyotl, the birthplace of graffiti in Mexico City. A former squatter settlement, Neza is not geographically too distant from the Centro (just to the east, near the Aeropuerto), but socially is almost another world, at least in the eyes of the bourgeois and the police. To move MOS to the center, then, is to enact a radical shift in audience and alliance. To get access to the center city, a difficult task, Gerso worked with representatives of the Fideicomiso, a government branch that serves as a "bridge" between citizens and government. I asked Oliver Bárcenas Cruz, Asesor of the Fideicomiso about his sector's involvement. He explained that the organization helps the festival get access, as part of the larger goal of enabling citizens, particularly youth, to feel that they have a stake in the cultural patrimony. Three elements are critical in fostering relationships between city, government, and nation, for Fideicomiso, Bárcenas Cruz elaborated: "Patrimony, Citizens, Neighbors." Part of their job is educating and making citizens feel that they have ownership and stewardship over the cultural patrimony, and that subsequently enables neighbors to feel more secure. Preempting an argument that I didn't make, he continued "But this does not mean gentrification...many people did not live here [in the areas where MOS takes place] until recently, because it was too dangerous." He concluded "We are very happy with how the festival has gone, and forsee it continuing in the future." His colleague, Rodrigo, echoed some of his sentiments, explaining how the festival allows for prejudices about graffiti as 'just vandalism" to be broken down as spectators can learn about the intense skill and discipline involved in graffiti as an art form. This link between government and graffiti is a new one. It was not long ago that Mayor Rudolph Giuliani's "Zero tolerance" policy was imported by federal and local officials to respond to the graffiti "epidemic." On day two of the festival, however, one of the stern faced young police officers took a grey spraycan in hand, "cleaning" a grey pole. The writers encircled him, clapping and cheering, and it was clear some of his institutional coldness in demeanor was thawing at the edges, a stubborn smile at the corners of his mouth as he held onto the can long after.

Despite Fideicomiso's optimism, there were some clear rumbles of uncertainty and mistrust by some of the writers, some remarking that the government has discovered that graffiti is a source of income, that it also enacts social control, that there is rampant corruption. Even so, there was also keen appreciation of the general role the festival plays as a point of union for a wide range of writers, a transnational meeting place.

Yems, from Peru, and Zurik, from Colombia, explained that in their home countries there were no festivals as big as MOS Mexico, and so the festival offered them the valuable opportunity to meet a wide range of international artists and learn more about their styles. Moreover, it is an important site for diversity, NEAR from Guatemala explained, echoed by Herso from Neza. Both of the latter artists attempted to represent some of this multiplicity in their pieces.


The festival does not just correct misperceptions about graffiti for Mexicans, but also correct prejudices and misrepresentations of Mexico for foreigners. Both Raso from Spain, and Ozais, from Marseilles, referenced negative media representations of the country, contrasting it with their warm welcome and the wealth of talent in Mexico. "It is not all drugs and trafficking," Ozais exclaimed, "there is art and people." Gerso explained that the festival(s) is a critical opportunity to spotlight the high quality of painting in Mexico, and make it internationally visible, a sentiment that motivated his shift to become an organizer instead of mere attendee. He created mode of organizing that was "bottom up...artist run, understanding what artists need...food, paint, housing." True to his word,  I saw constant food and paint deliveries, as well as a dedicated spot for poster distribution to curious passers by, which became instant souvenirs, youth asking artists for signatures, tags on their clothing, or even tags on blank sheets when the posters ran out.

Mariela from Argentina, more street artist/public painter than graffiti writer, pointed to the affective effect of festivals and other public works, that offer a space to "open up" the city, for people to "recharge," and see differently. Gerso, by inviting nontraditional urban artists, like Mariela, also sought to internationalize and pluralize the festival, breaking with a restrictive definition of "style." Glo, her neighbor on her wall, based out of San Diego,exemplified one of these diverse styles, rendering an ethereal alien-like creature instead of complex letters.

For Mexican writers as well, the festival is a critical point for reunion. Diego Loza emphasized the role it played for the community, as did Motick.
I saw old friends from MOS 2011: Reak, Yuka, Atok, Mser, persisting and evolving their styles.
When I asked Oliver, more pointedly, about what it means to take an art from the periphery and plop it in the center, he recalled an interaction he'd had with a vecina, a neighbor, an an event they had organized. After complimenting him on the event the old woman told him that what they had done was very nice, but places like the "Palacio de Bellas arts...estan para los ricos." Places like PBA are for the rich. And yet, not, formally. They are free and open. But what is free and what feels public are two different things entirely. And so, the goal is to render such spaces more porous through ongoing education and repetition. 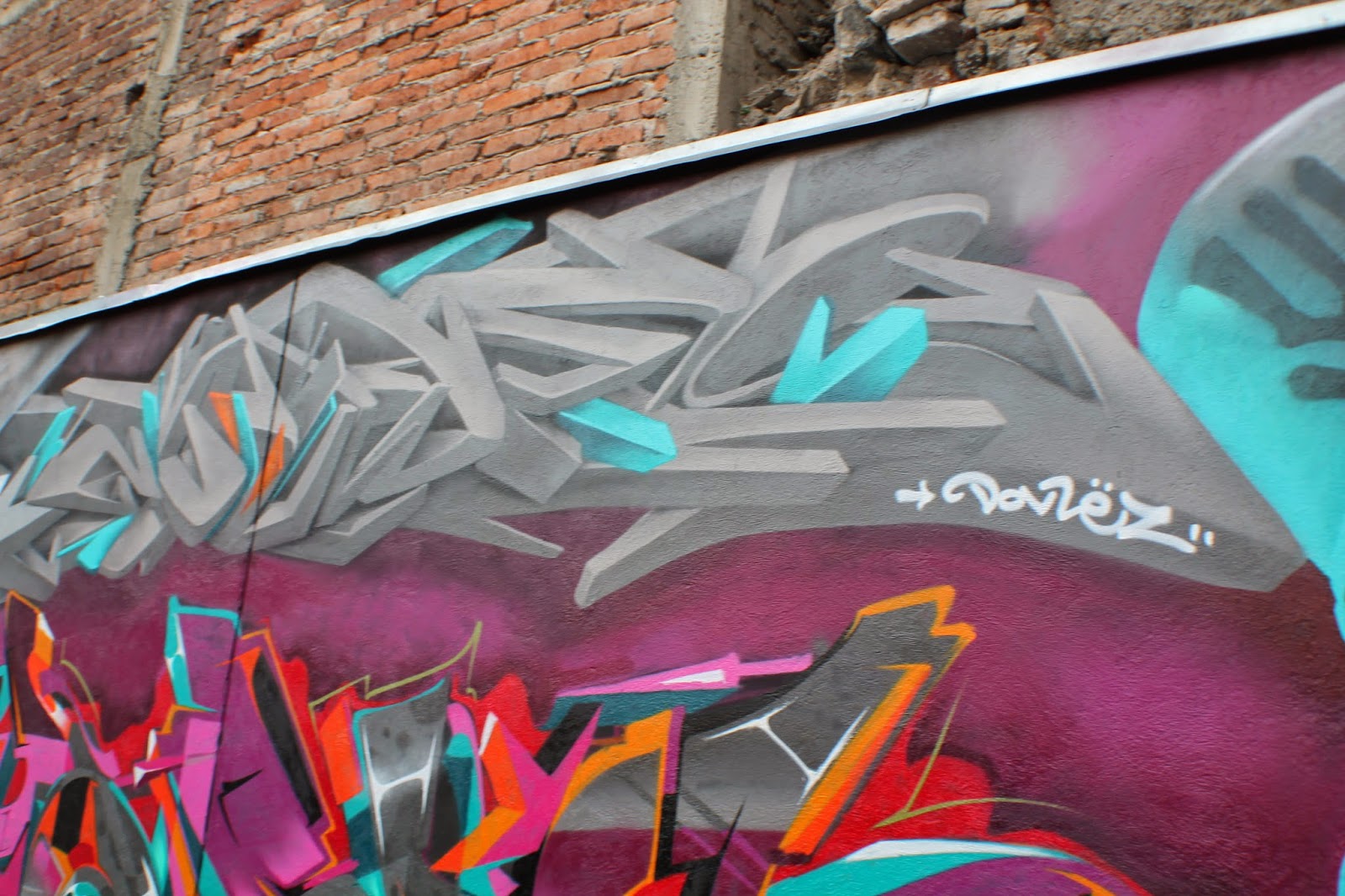 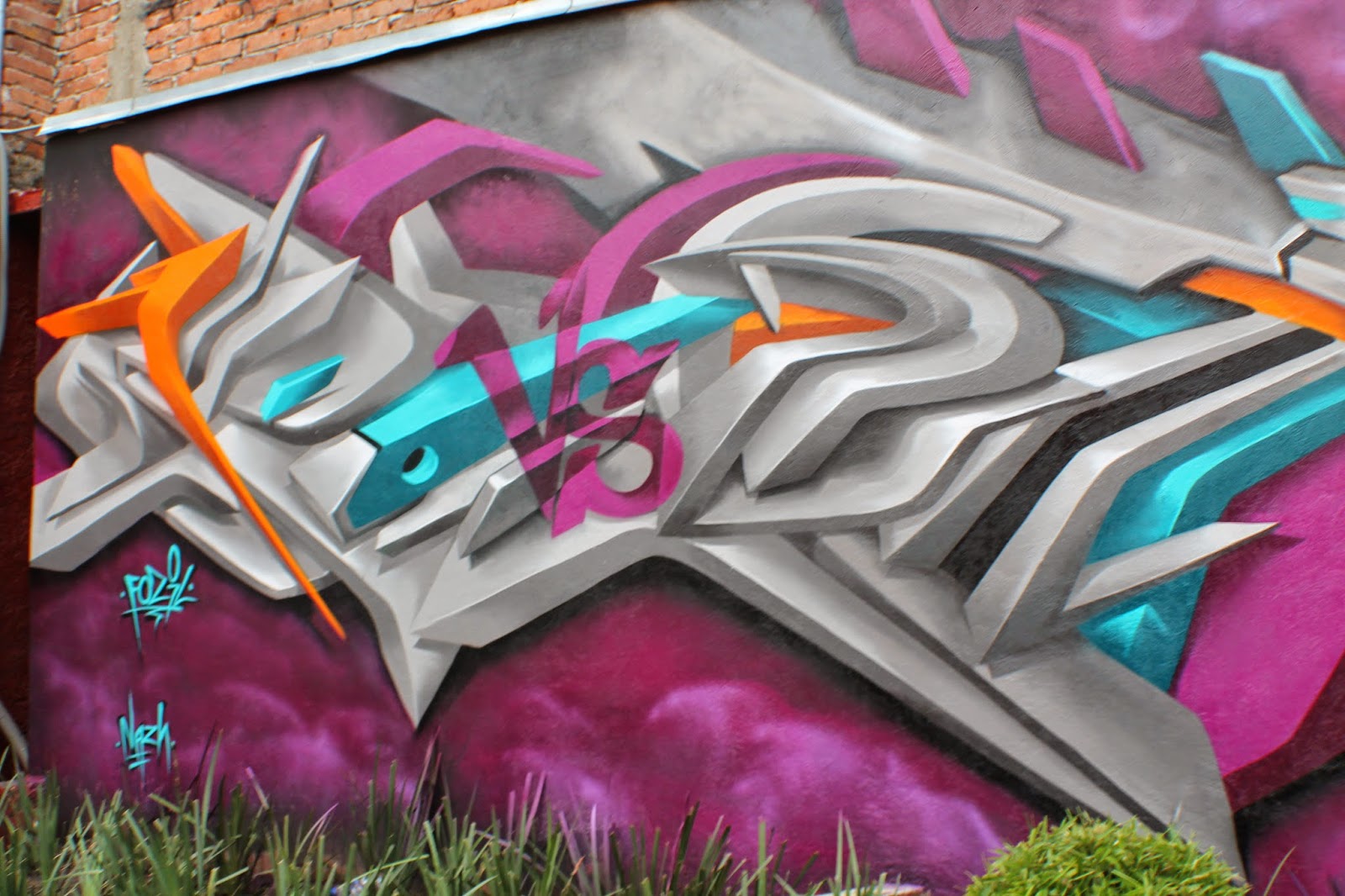 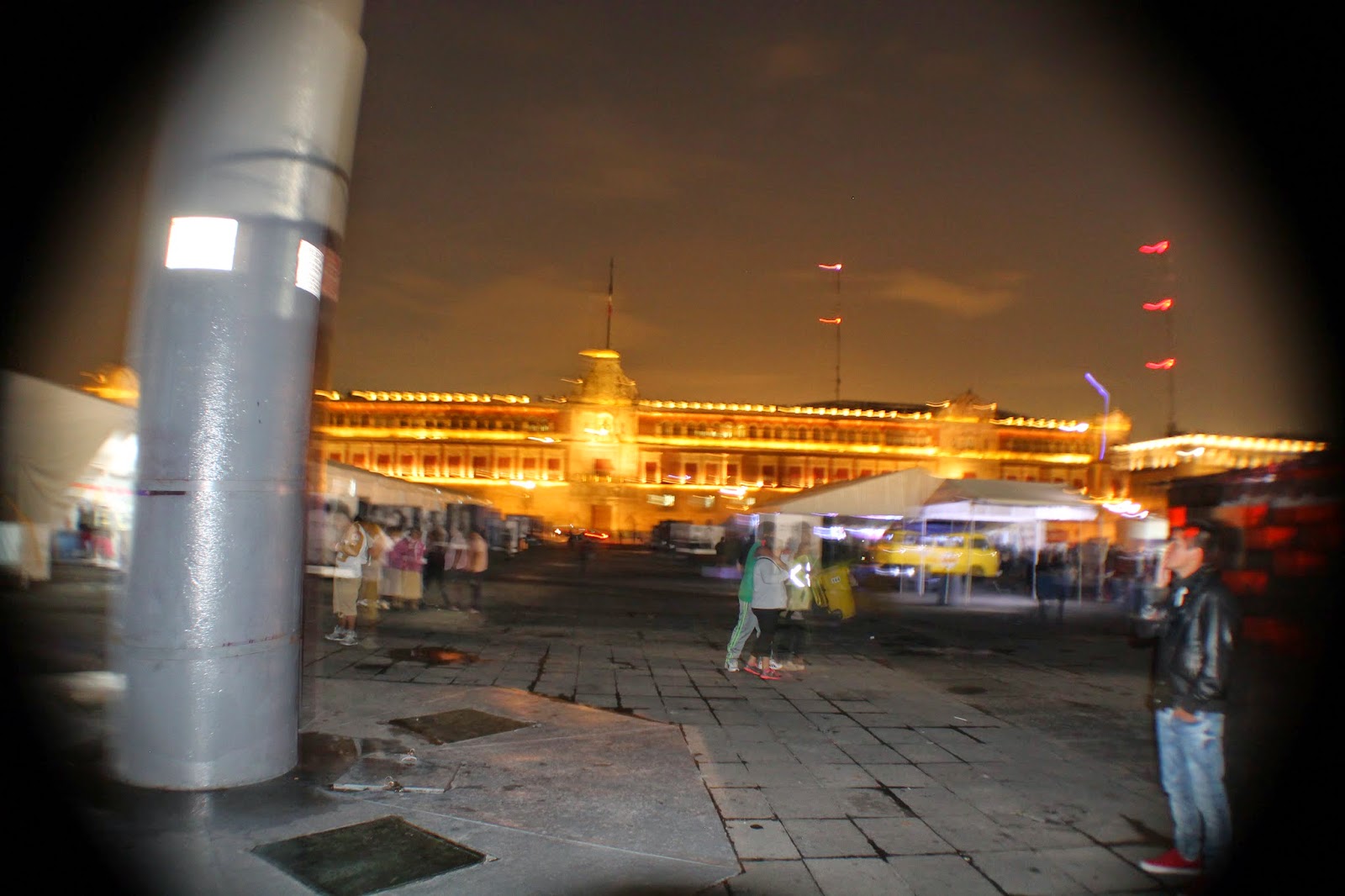 I asked all the writers I spoke with the deliberately naive question: "Do you think graffiti can change the world?" All responded in the affirmative with important qualifications, that it effectuates a change in outlook and environment primarily, and perhaps a change in relationality and community secondarily. It is a means of bringing about spaces that feel more public, but it is a method that is intermittent, ephemeral, and necessary to repeat, again and again. 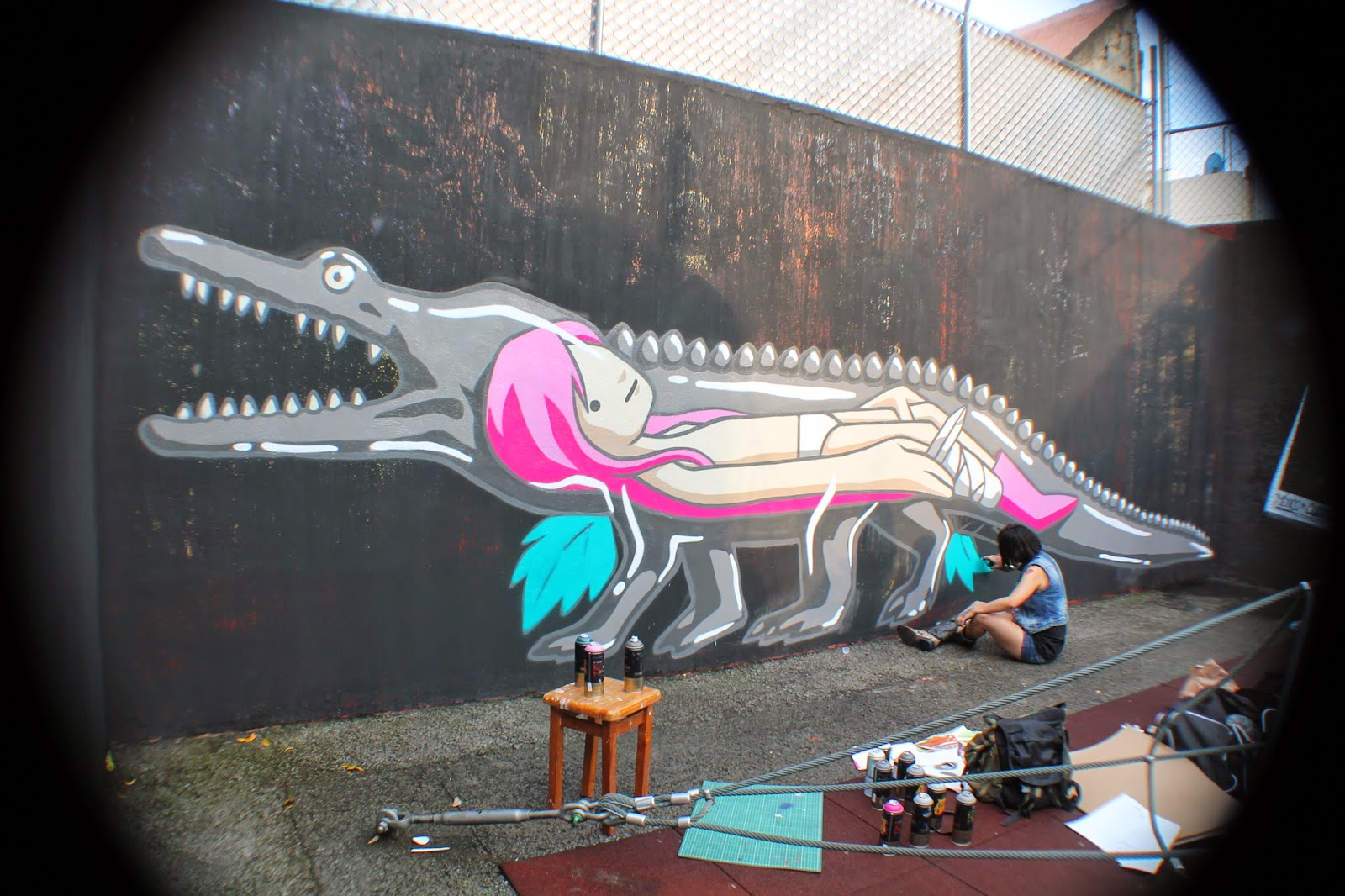 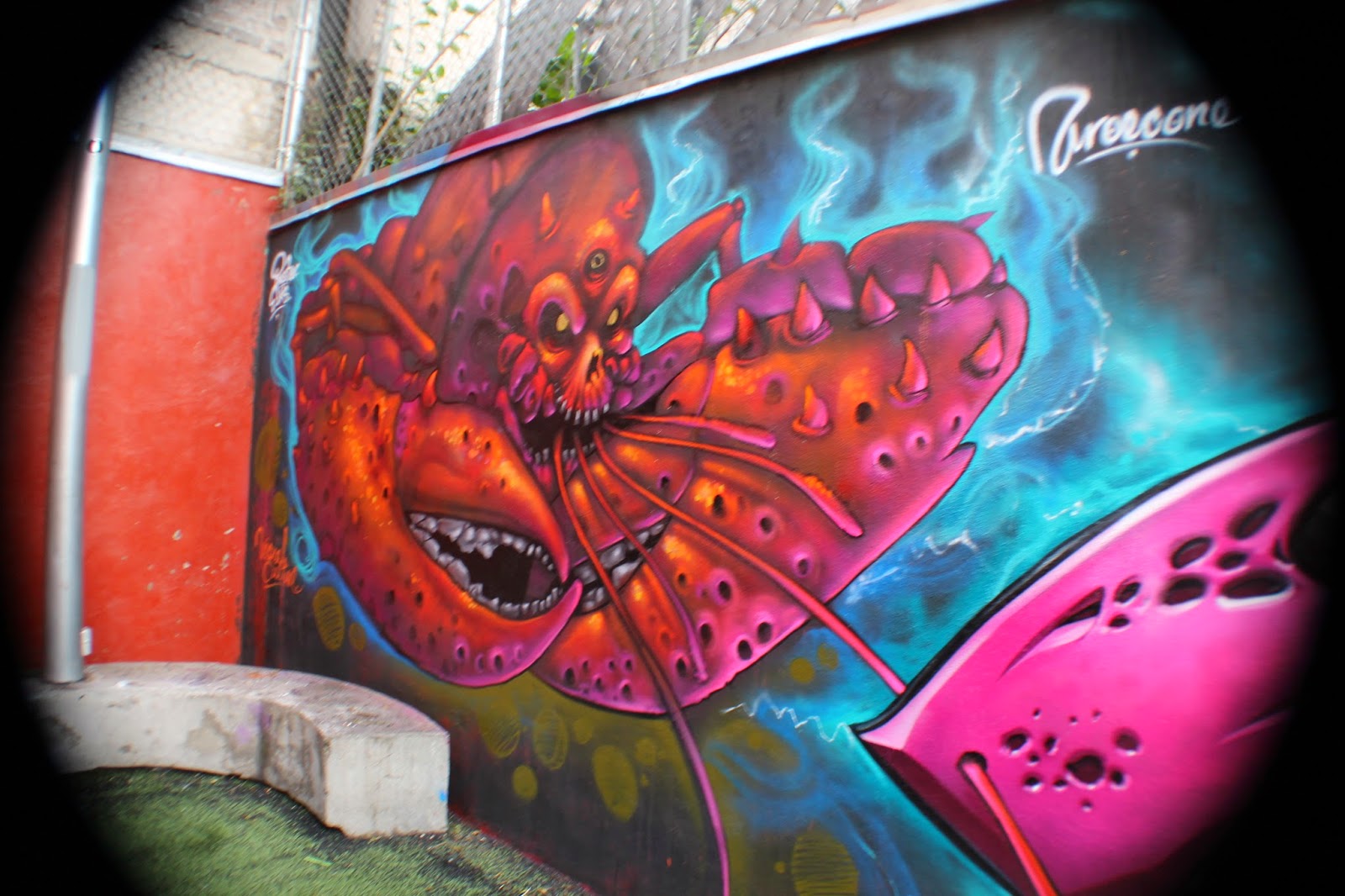 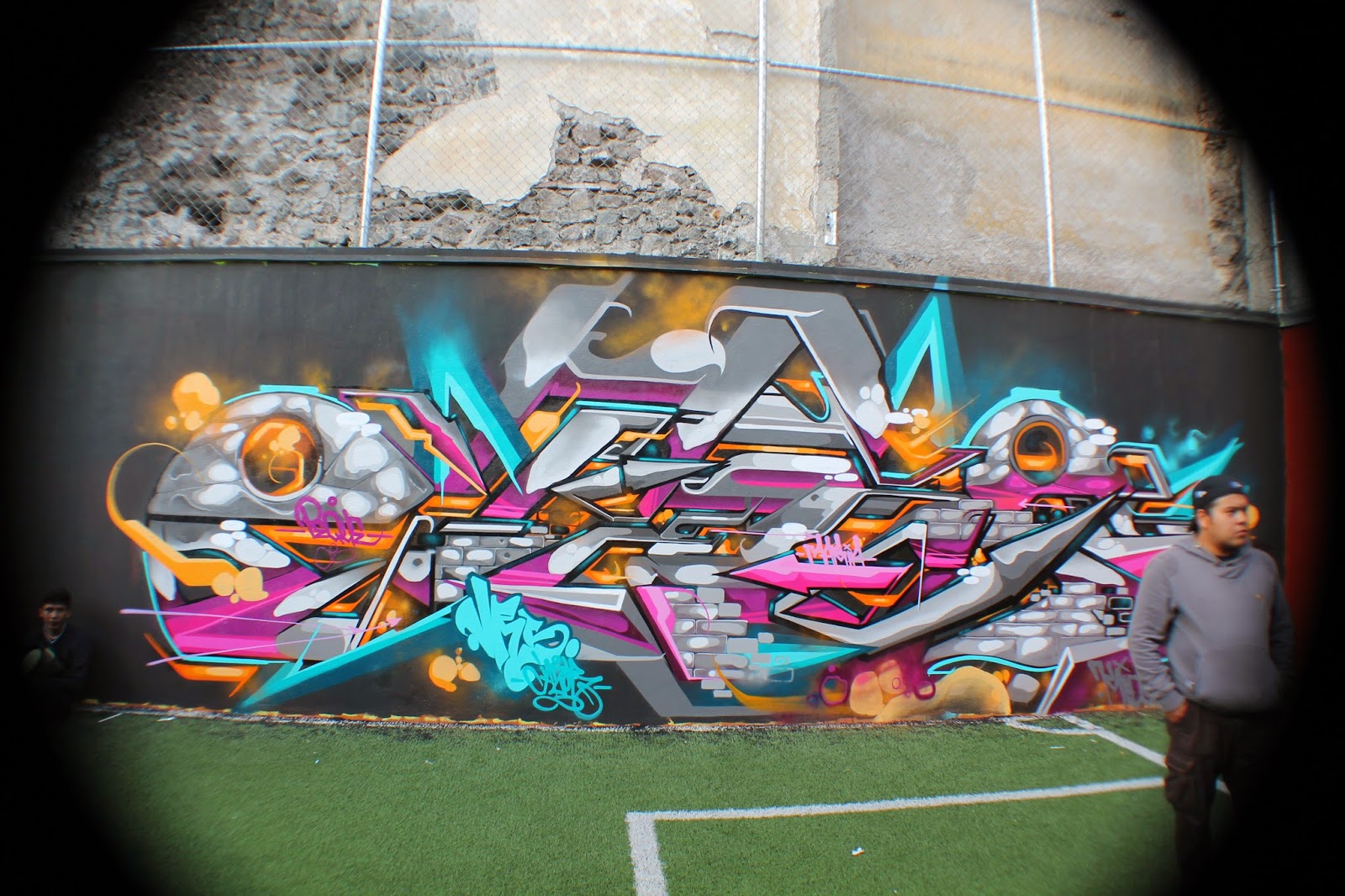 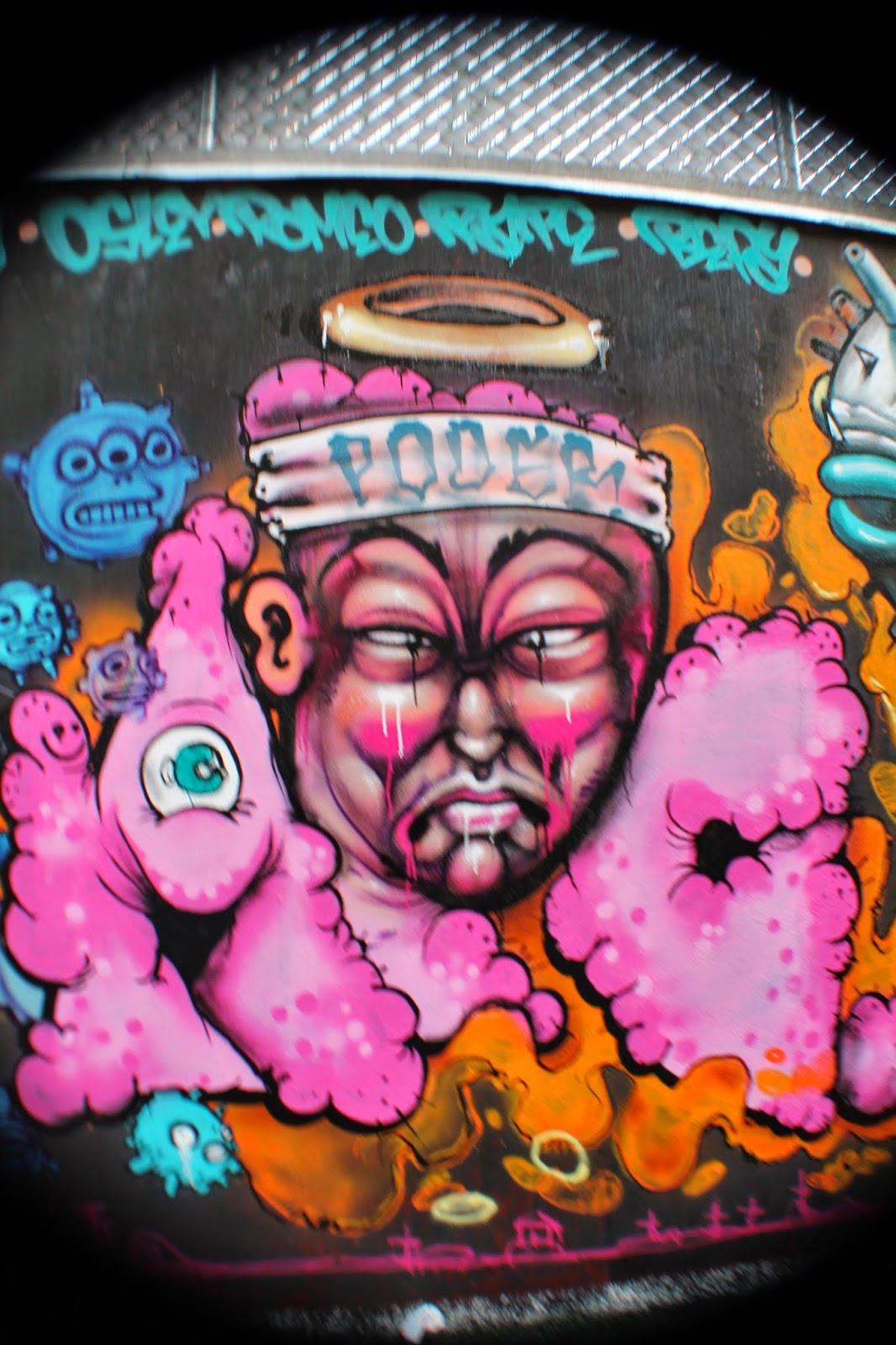 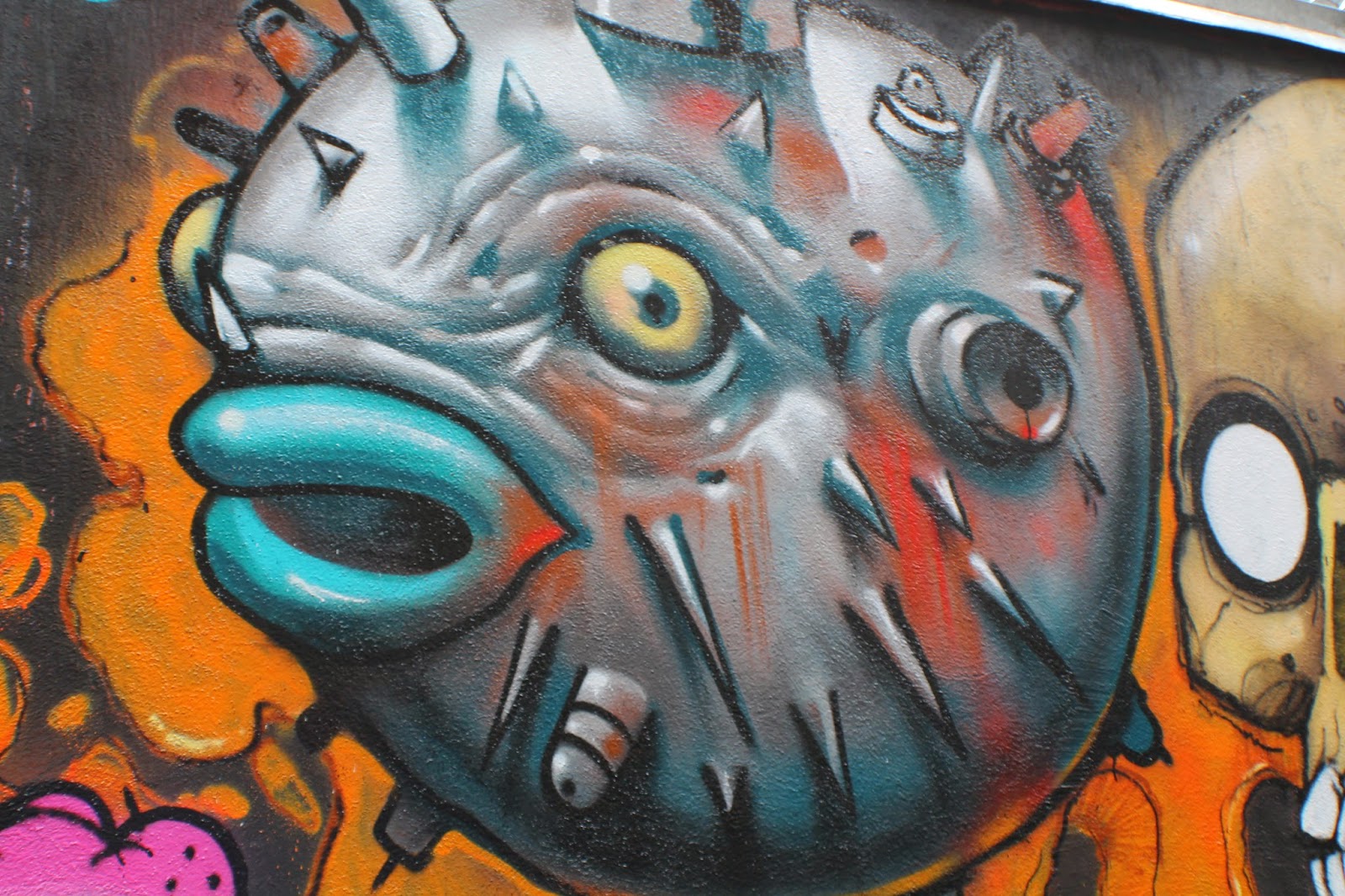 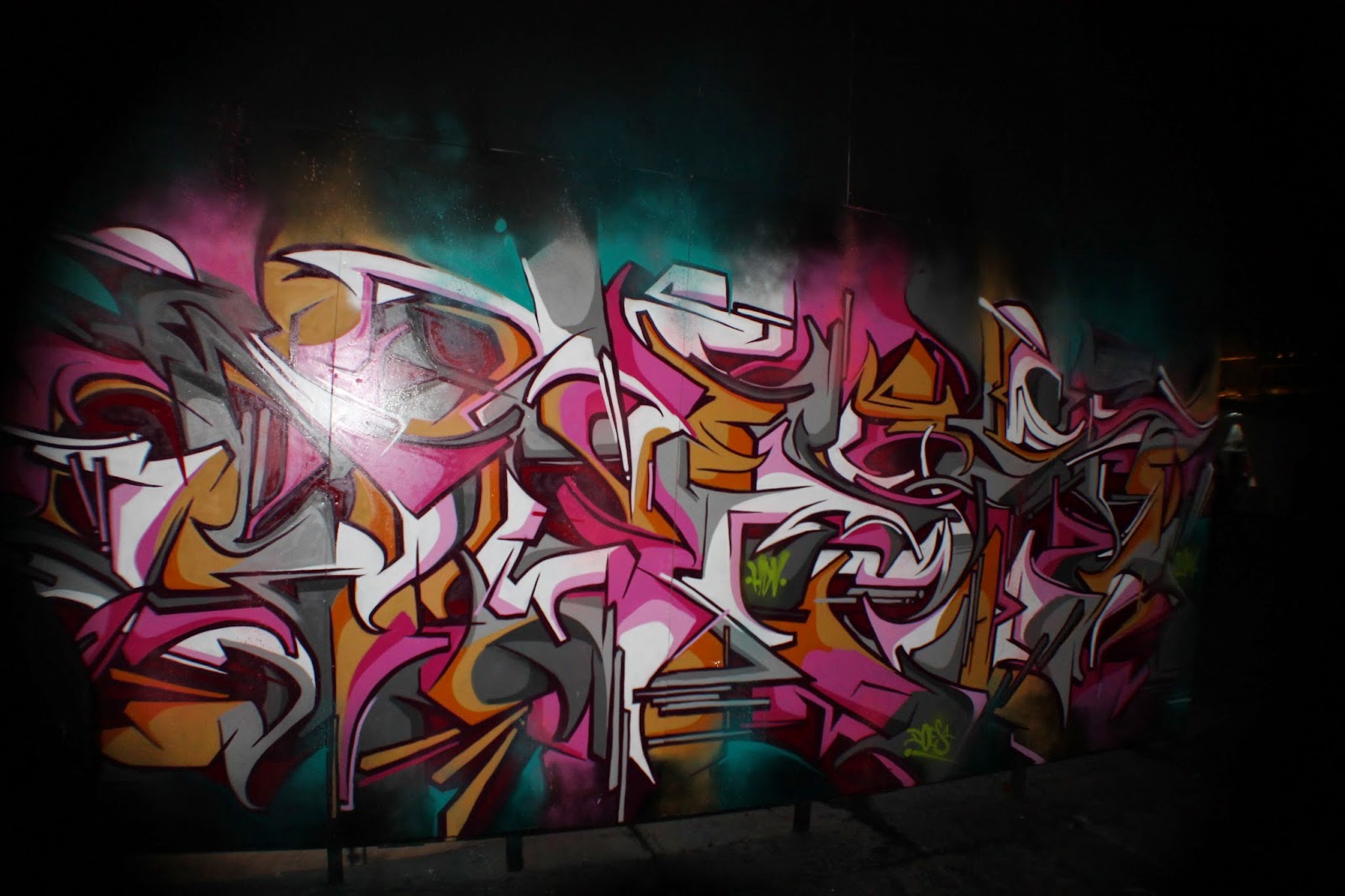 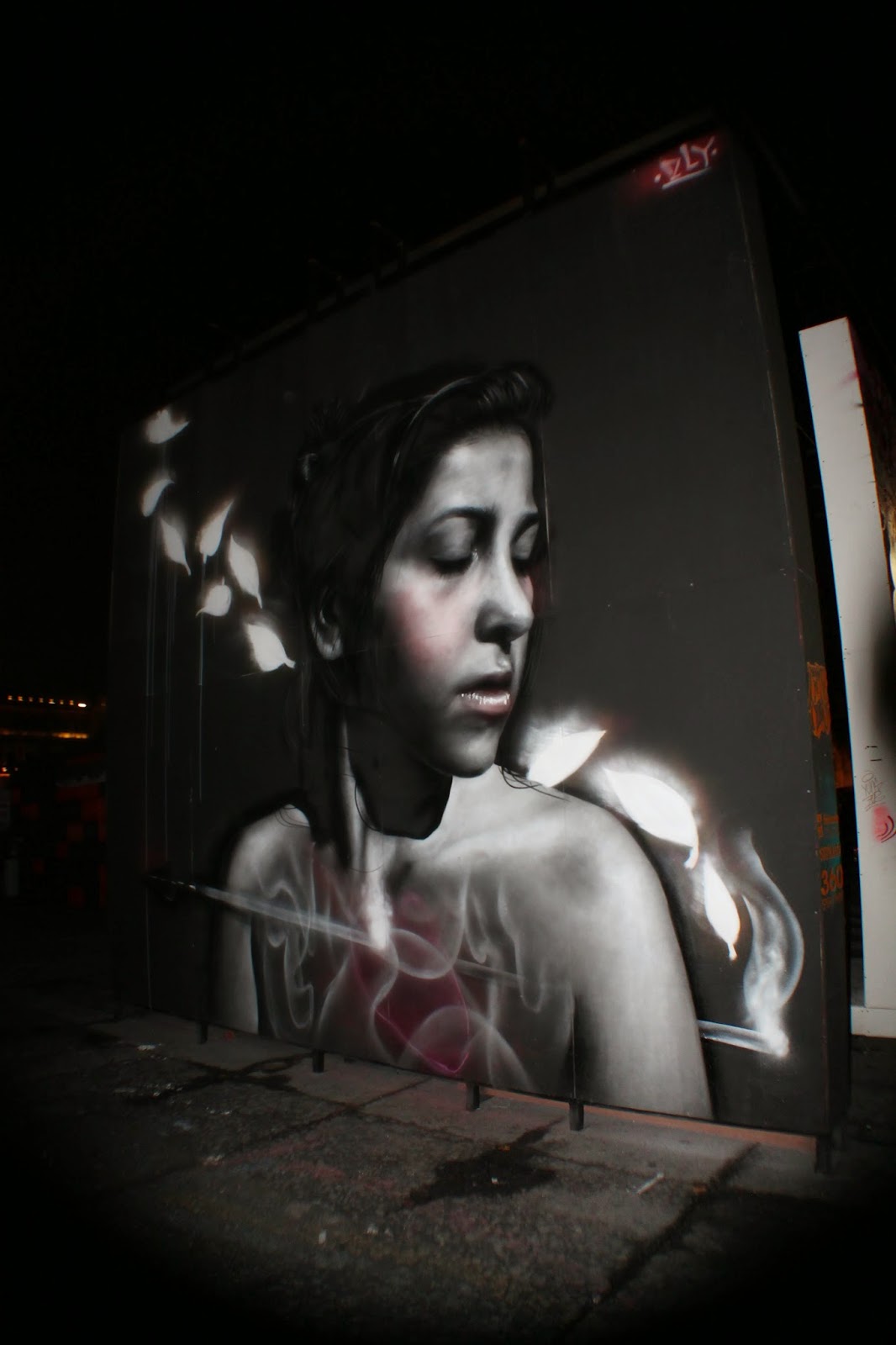 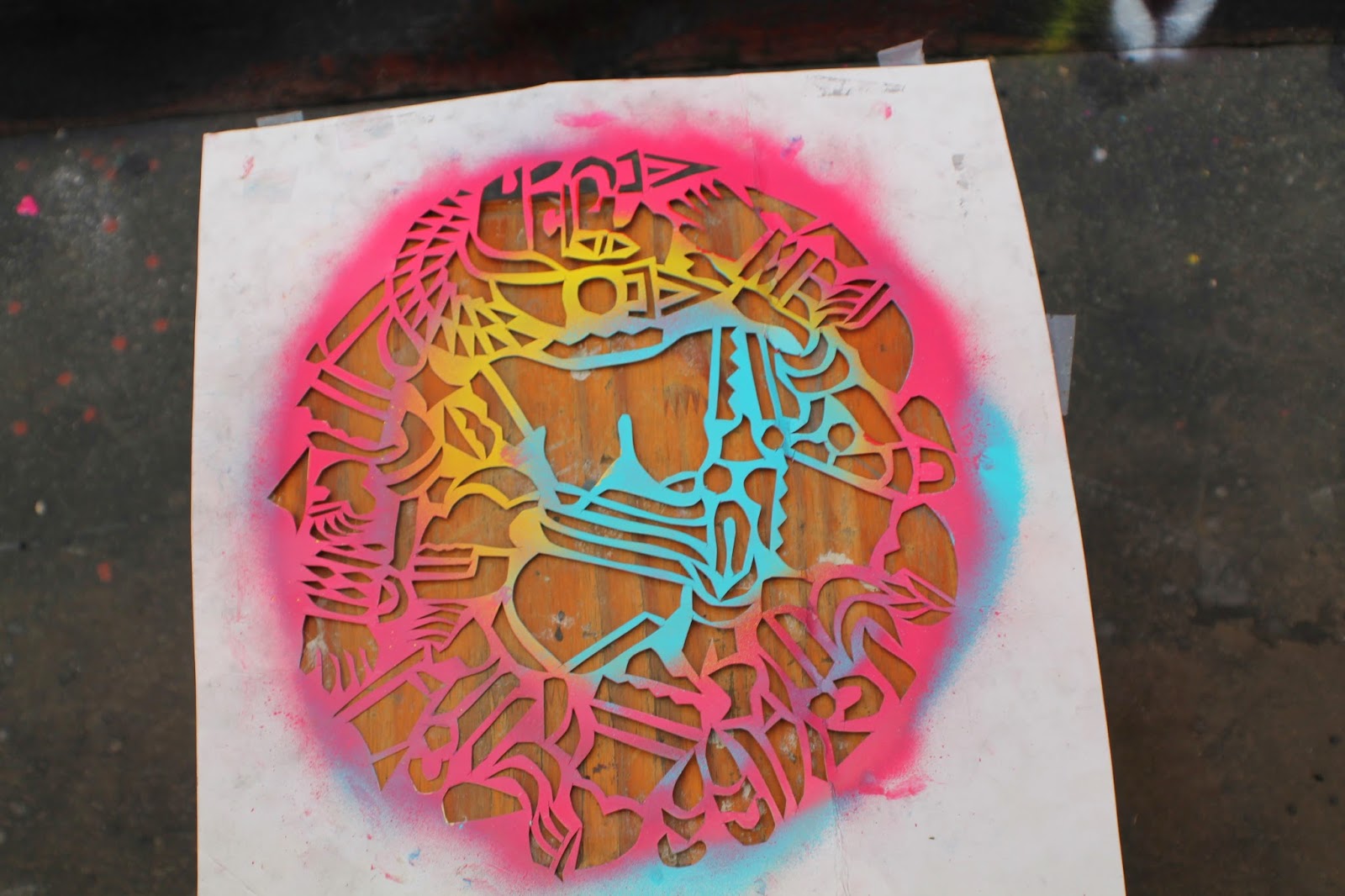 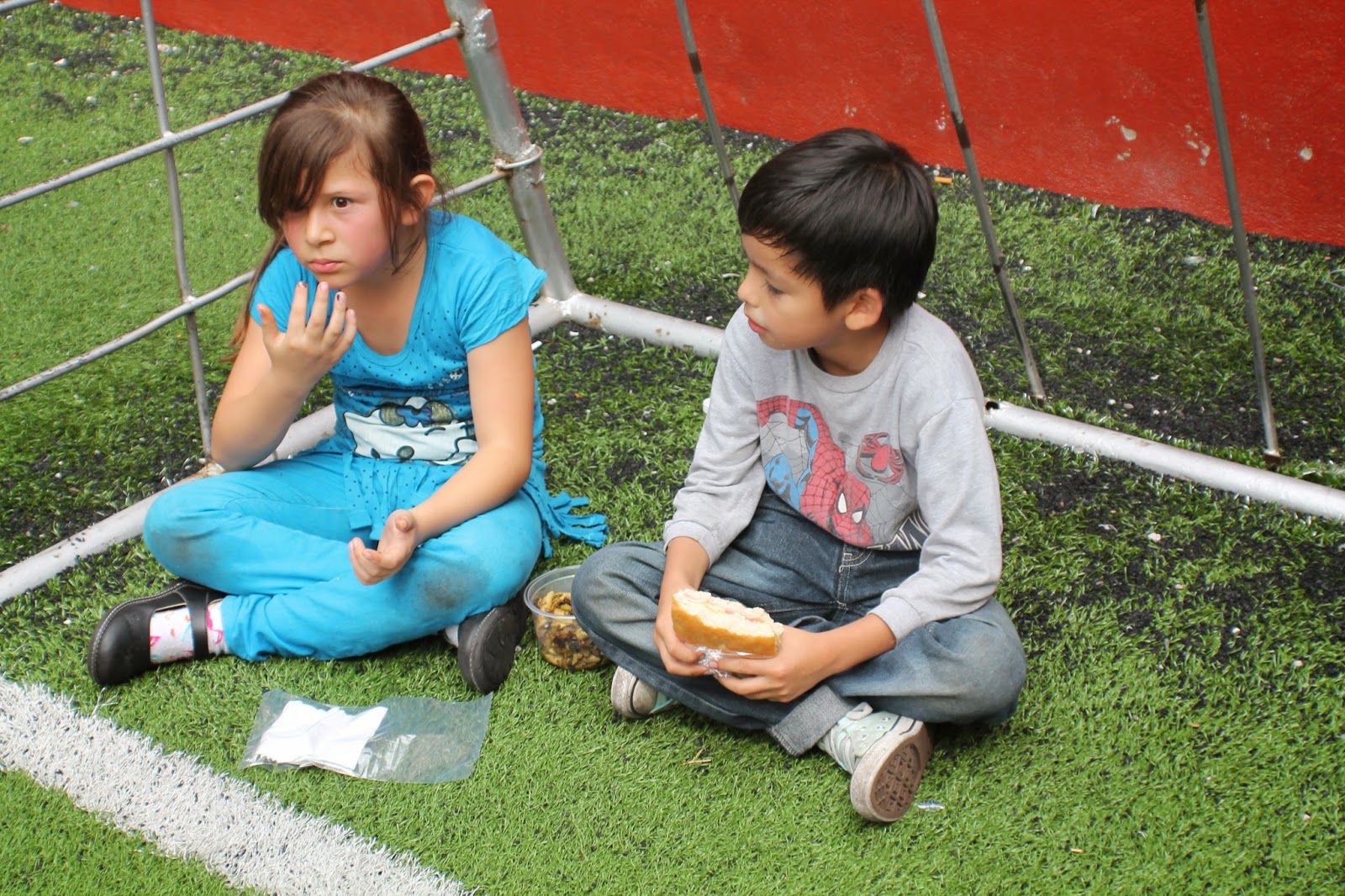 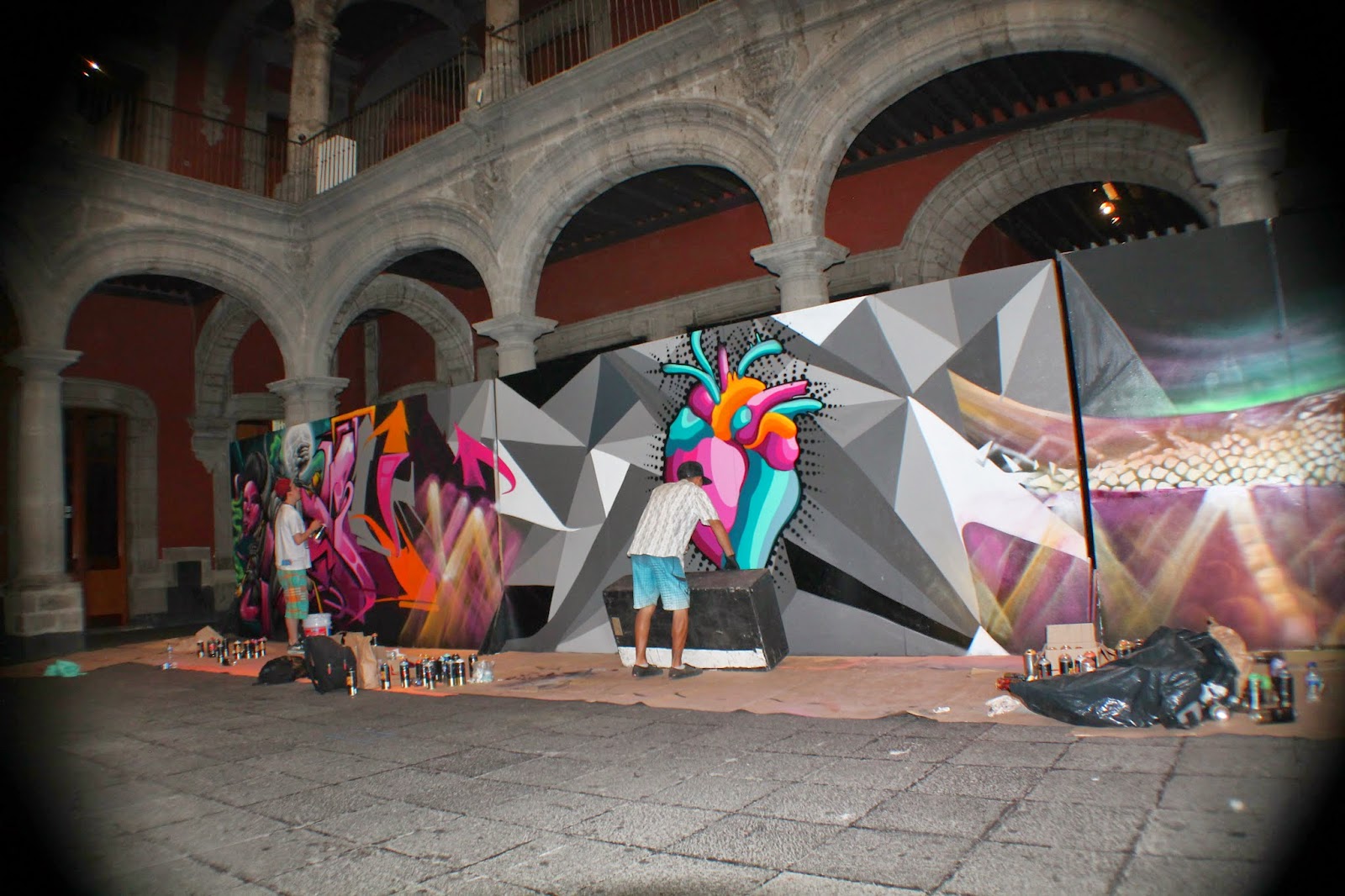 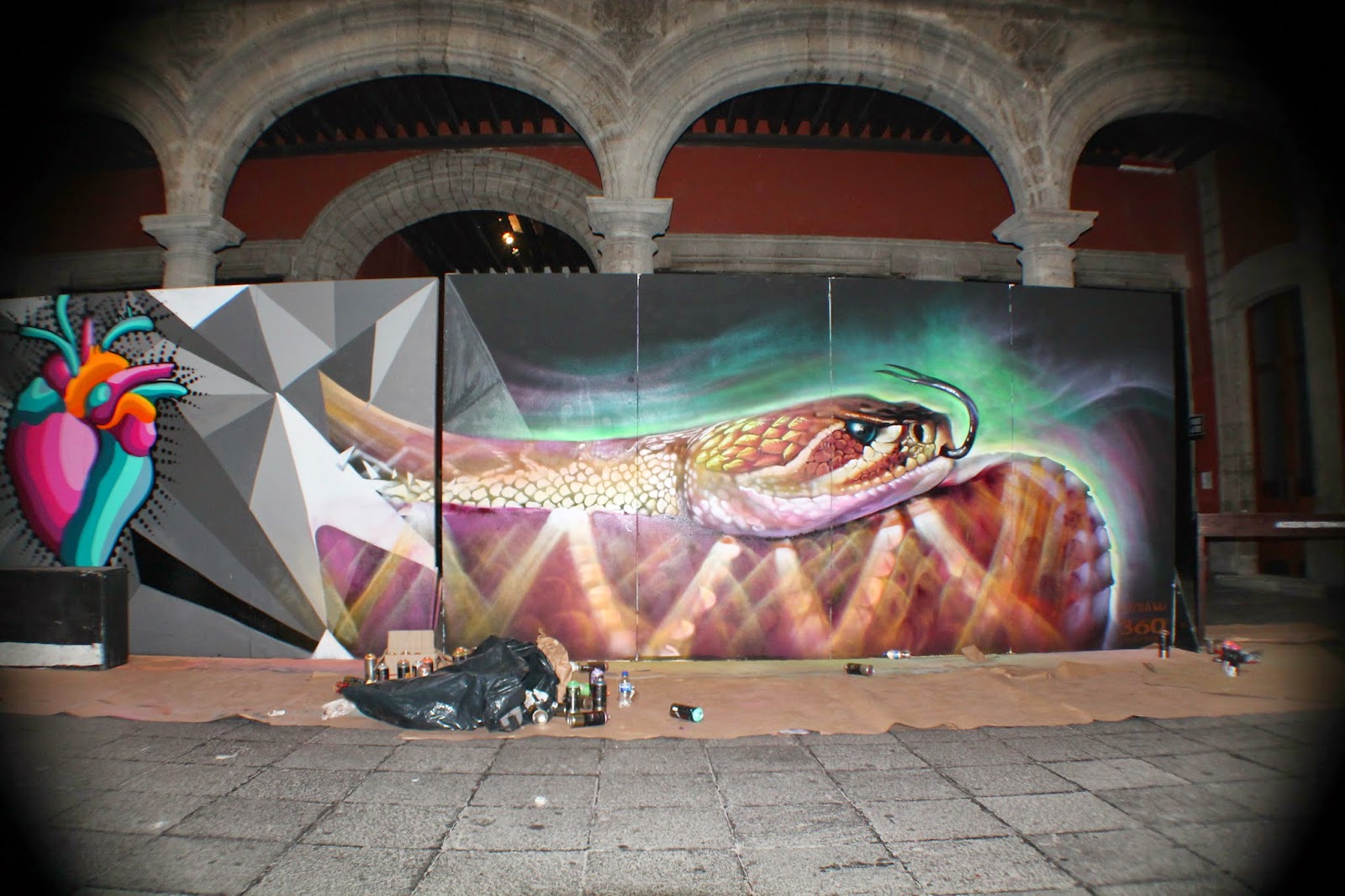 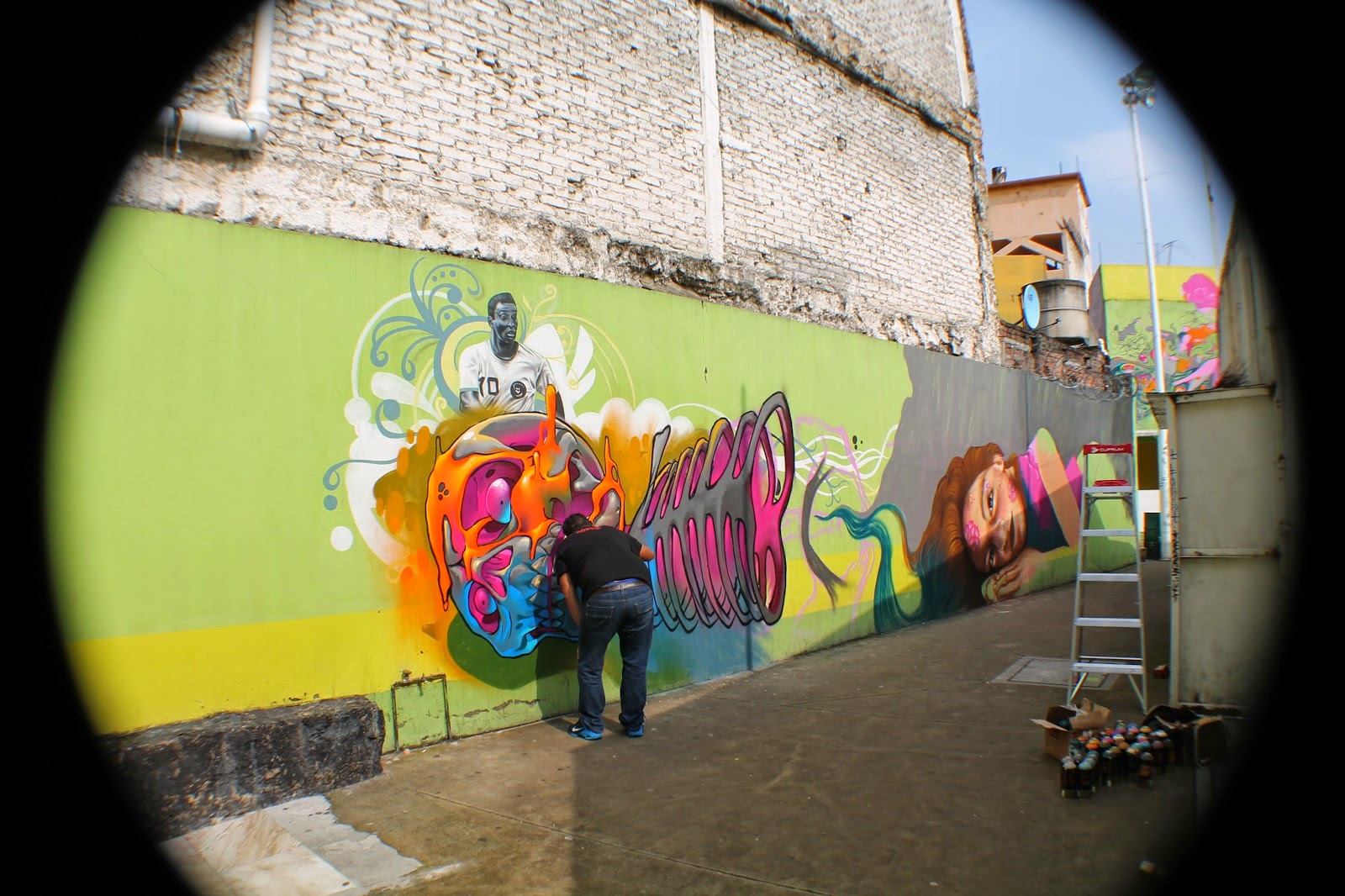 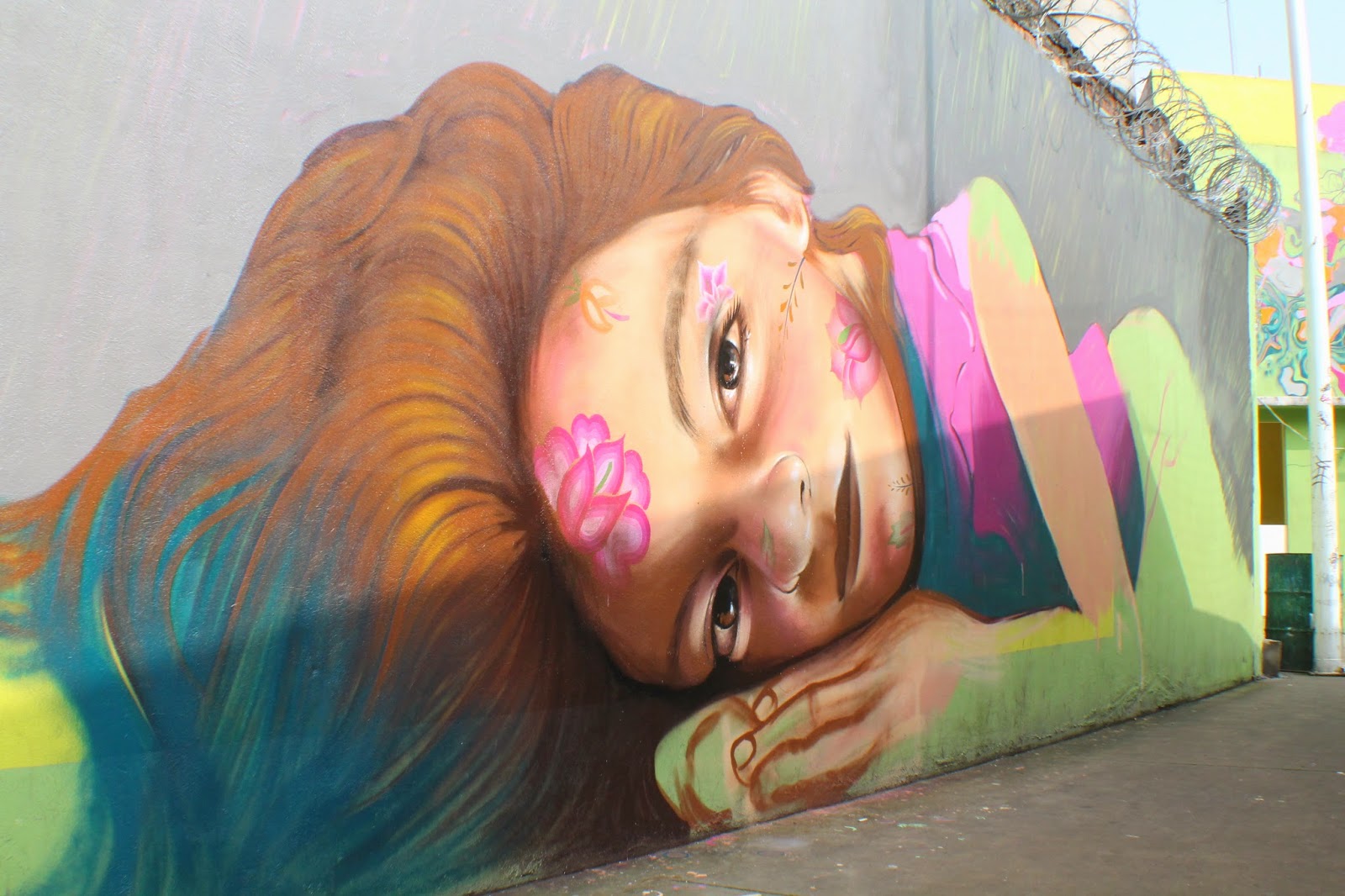 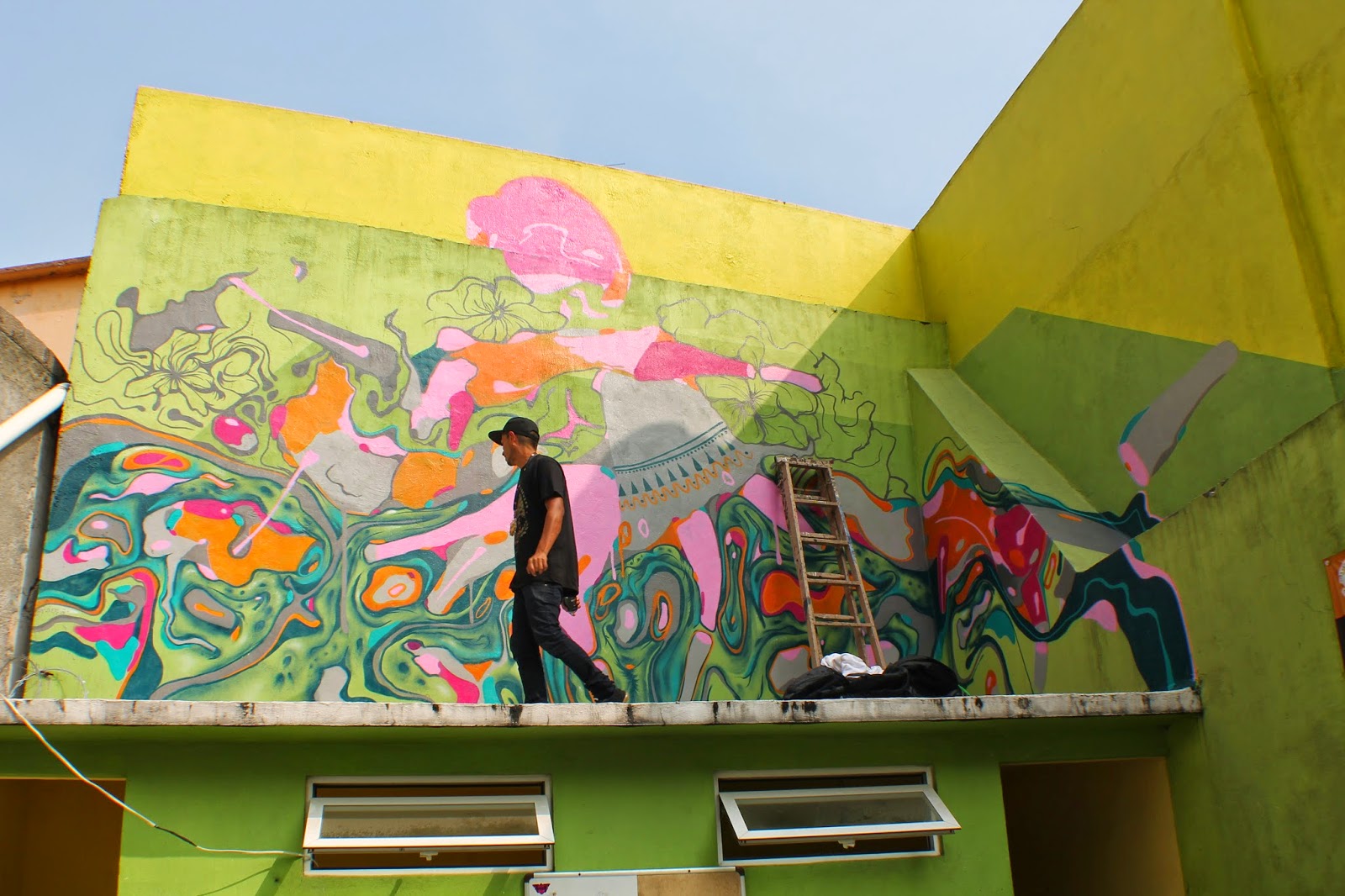 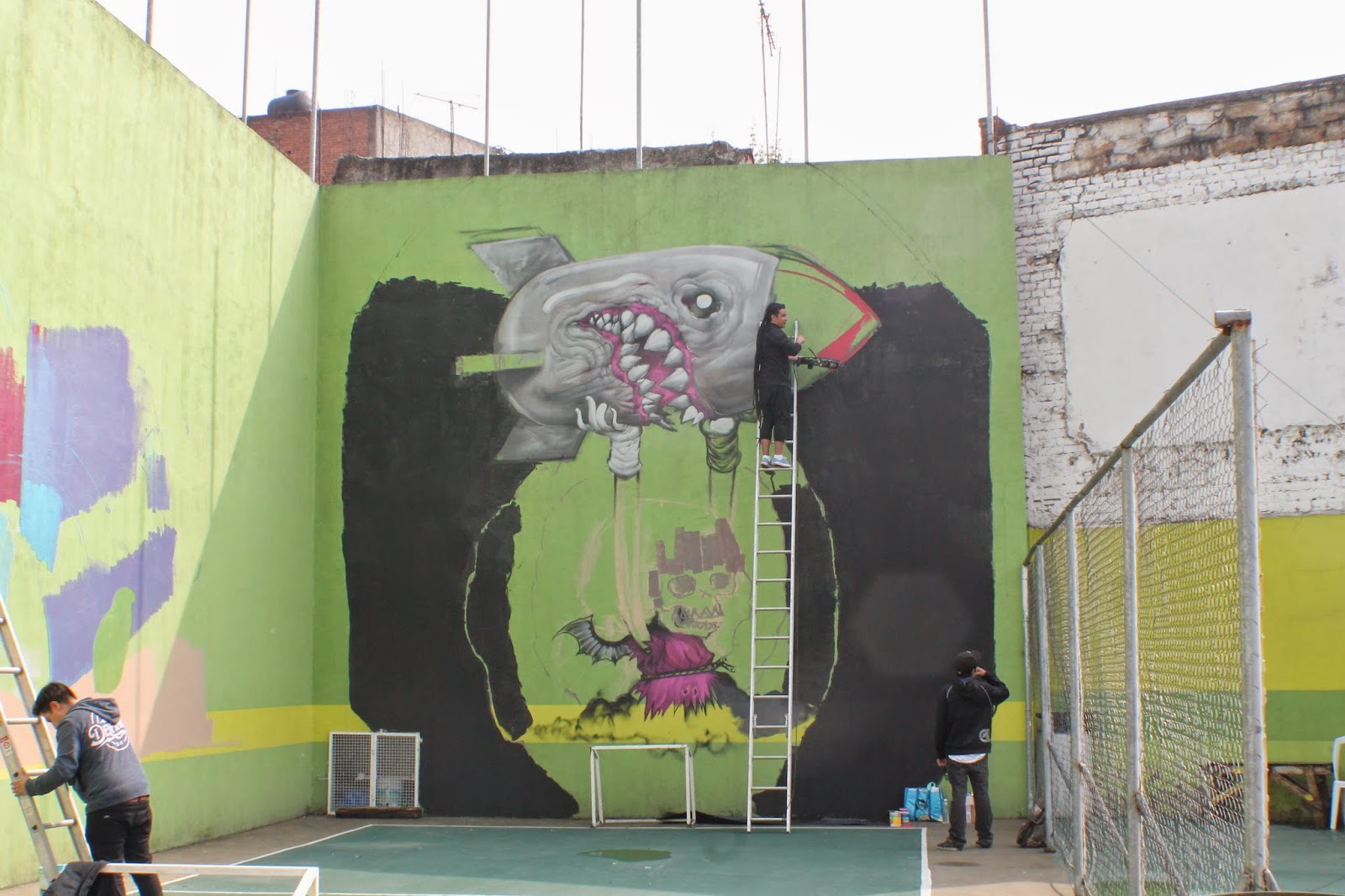 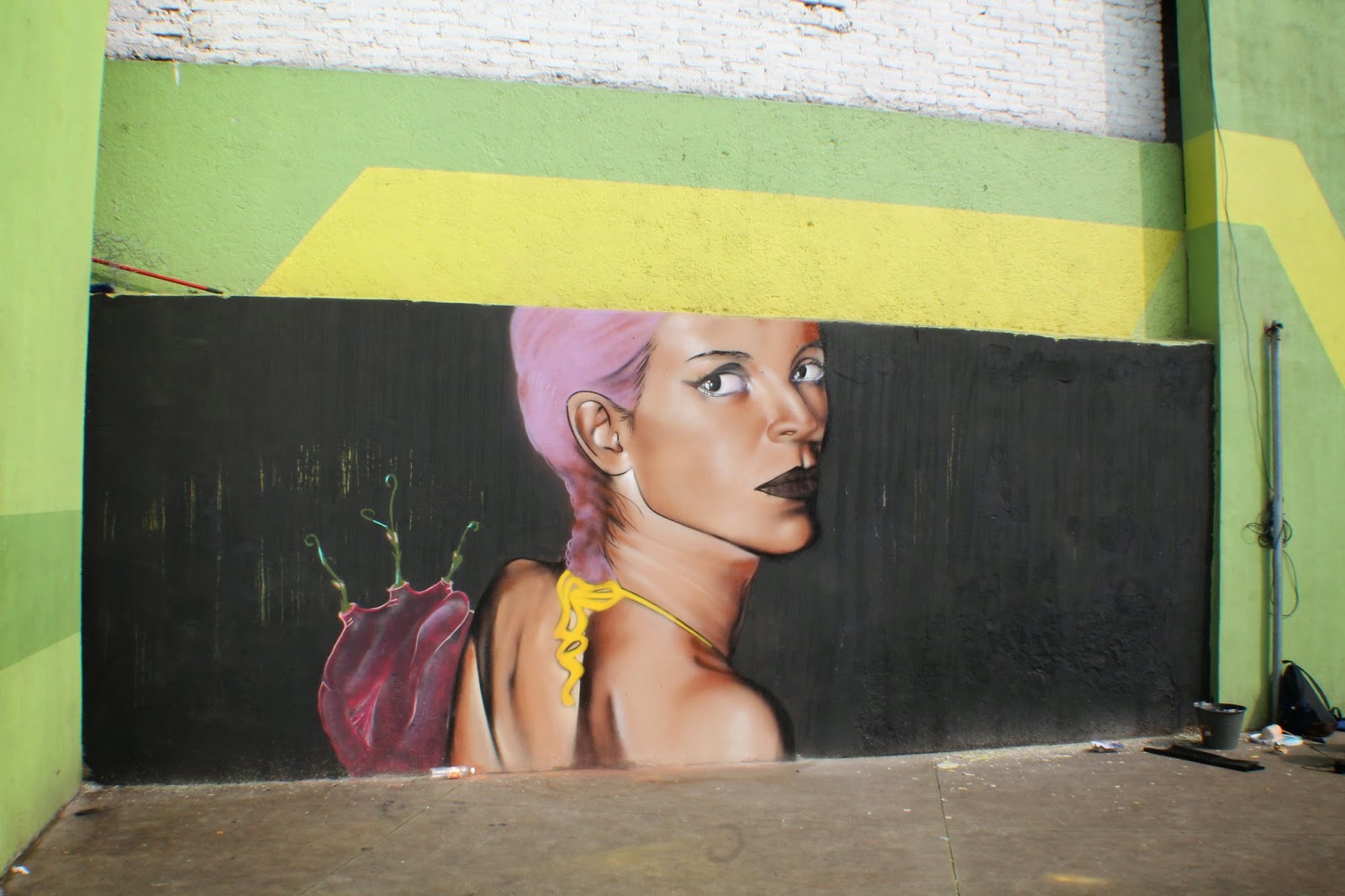 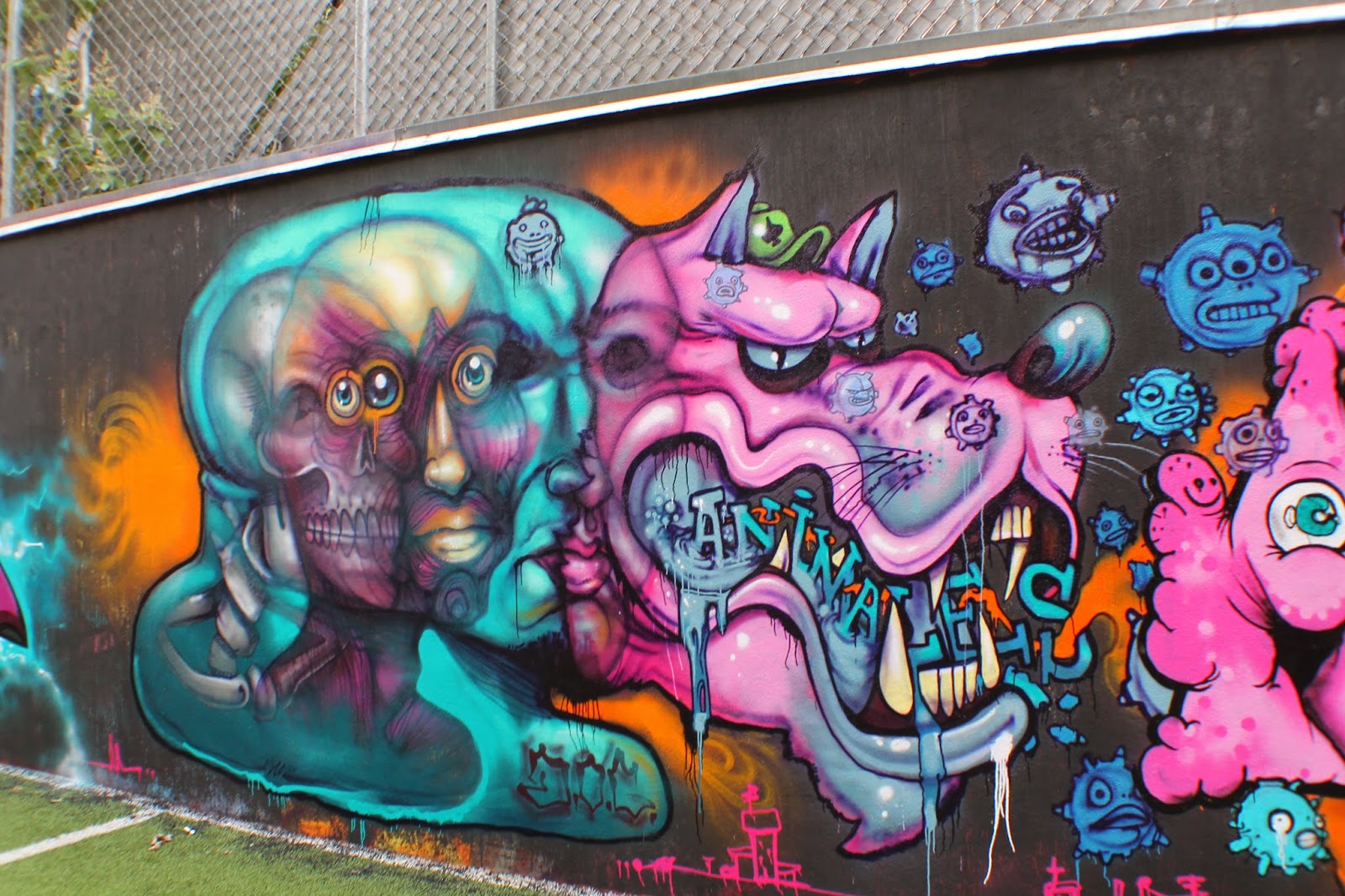 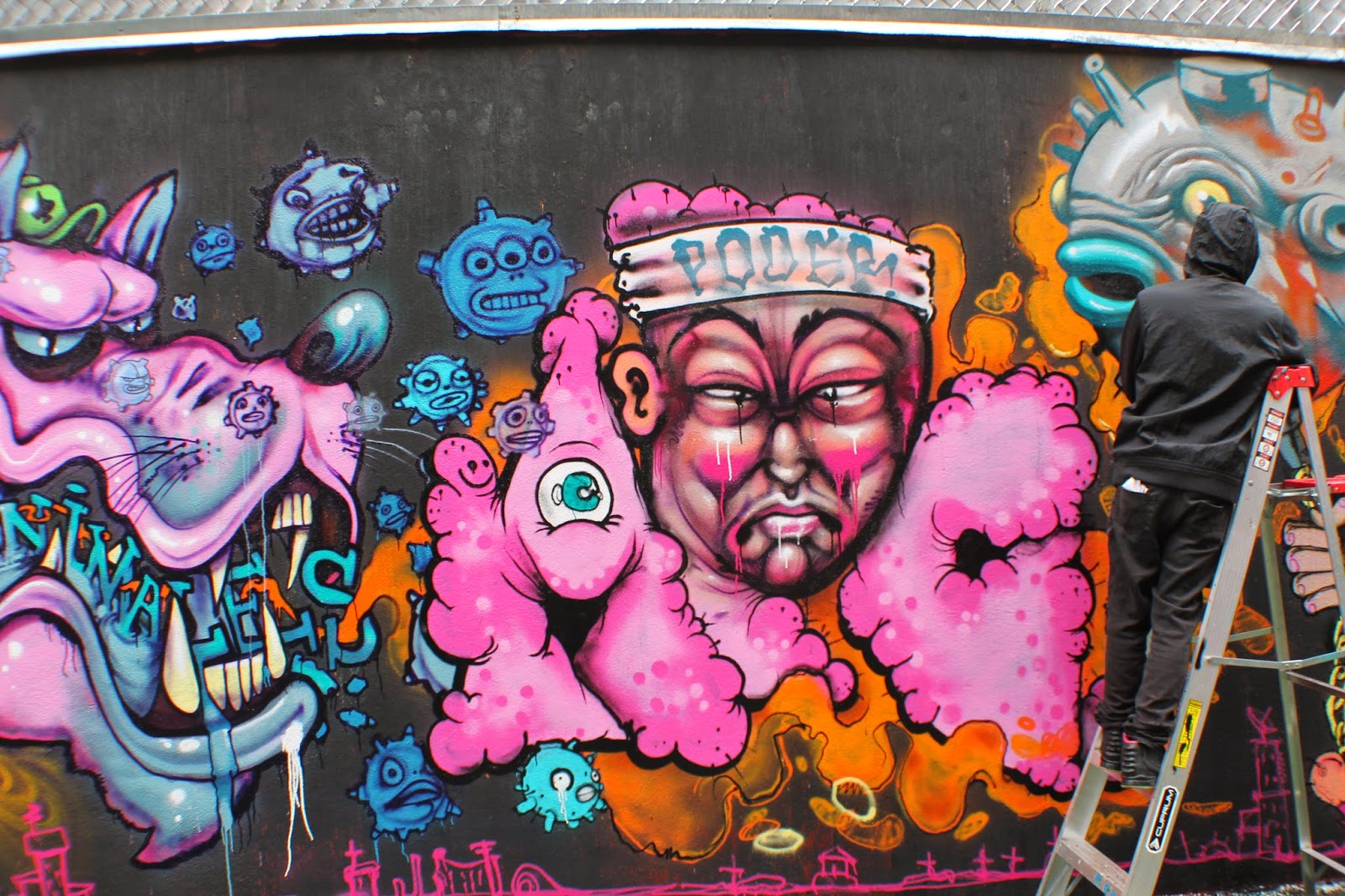 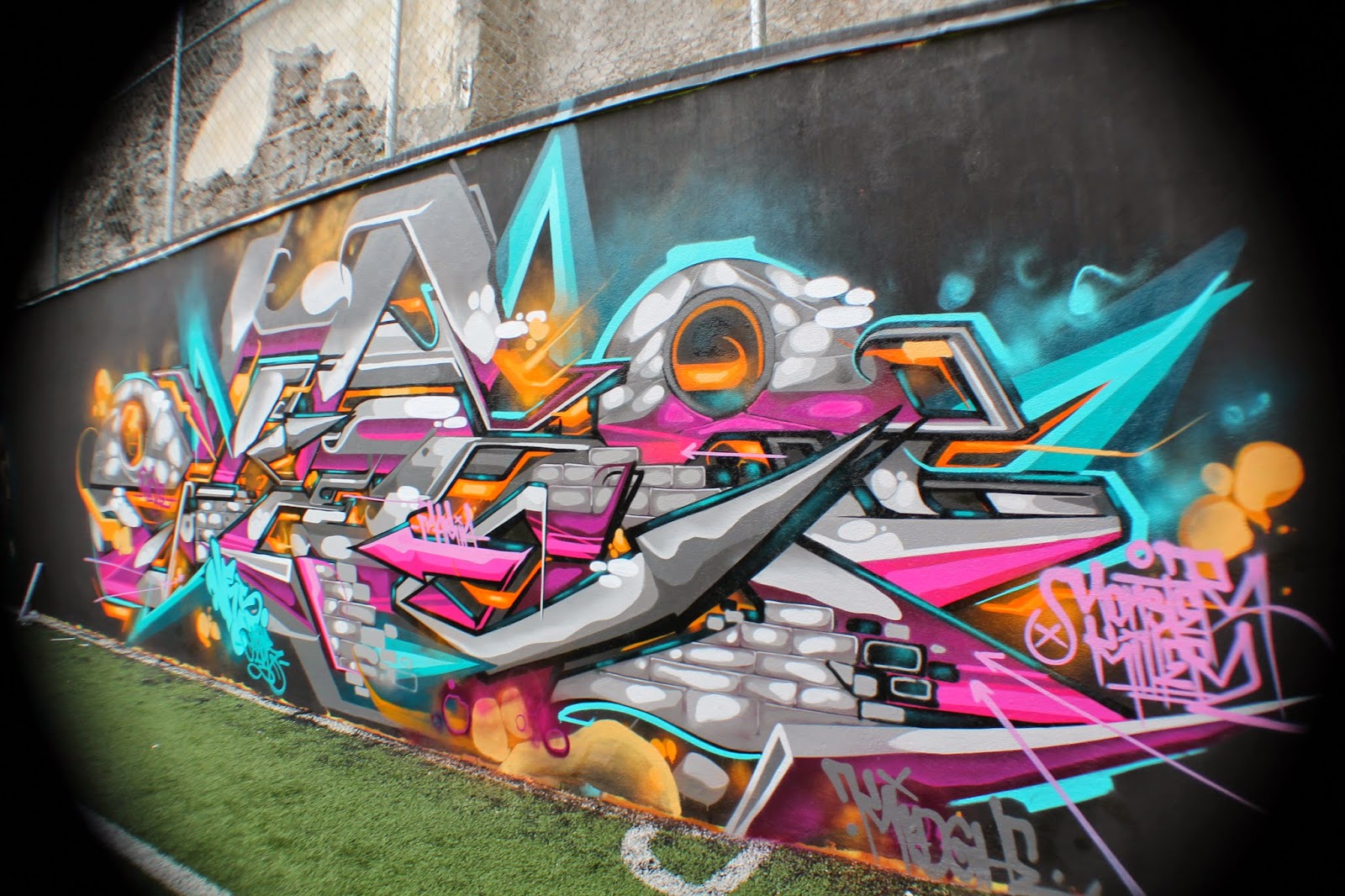 Thank you to all of the artists for talking to me. It was wonderful.
Muchas gracias a todos las artists para platicar conmigo. Esta fue un evento increible.
Posted by Caitlin's Blog at 10:26 AM