Seeing the Forest and the Trees: Sedgwick on Texture

In Eve Kosofsky Sedgewick's 2003 text, Touching Feeling: Affect, Pedagogy, Performativity, she charts a difficult but intriguing course in trying to account for affect as biological as well as nonlinguistic while playfully illuminating the surprising anti-essentialisms that such an approach can unfold. Using Tomkins' tomes on affect, an approach to affect that, unlike Freud and his intellectual kin, does not reduce affect to drive (as libidinal and sexual) but understands it to have multiple objects and even autotelic qualities. Another objective of the text is a generous reading strategy that resists the polemical application of a "hermeneutics of suspicion" or an easy cookie-cutter deployments of the "repressive hypothesis", instead, thinking "beside" instead of "beneath" or "beyond." (9-2) These approaches, she laments, involve the all-too-common "bossy gesture of 'calling for' an imminently perfected critical or revolutionary practice that one can oneself only adumbrate." (8)

She articulates, of such besideness: "Beside permits a spacious agnosticism about several of the linear logics that enforce dualistic thinking: noncontradiction or the law of the excluded middle, cause versus effect, subject versus object. Its interest does not, however, depend on a fantasy of metonymically egalitarian or even pacific relations, as any child knows who's shared a bed with siblings. Beside comprises a wide range of desiring, identifying, representing, repelling, paralleling, differentiating, rivaling, leaning, twisting, mimicking, withdrawing, attracting, aggressing, warping, and other relations.' (8)

In a listing approach, a performative writing of besideness in the practice of description as theorization, Sedgwick offers an account of affect that is as dynamic as it is complex, without elevating "beside" to the status of normative ideal. Instead, it is a complex descriptor for the human and object interactions that take place in a multitude of contexts. She further characterizes this approach as spatial, involving accounts of "systems description" (12) that may allow us to think about "the middle ranges of agency...that offer space for effectual creativity and change." (13)

Beside, then, offers a more humble approach to what beings can do with respect to social practices, it acknowledges the complexity of what it means to take and make forms in a world while, paradoxically, using systems theory and the notion of the "cybernetic fold" to resist a binary approach "accepting or refusing" (13).

It is here that touch as it relates to texture emerges as a way to think about how being beside emerges in sensorial interactions. Reading Renu Bora, Sedgwick explains that "to perceive texture is always, immediately, and de facto to be immersed in a field of active narrative hypothesizing, testing, and re-understanding of how physical properties act and are acted upon over time...Textual perception always explores...How did it get that way? What could I do with it? These are the kind of intrinsically interactive properties that James J. Gibson called 'affordances' in his 1966 book, The Senses Considered as Perceptual Systems..." (13) These questions about an object or surface's history, and a surface's capacity might stand out to rhetoric scholars. To understand a surface as a historical interactant that possesses capacities directly related to invention, is indeed, the kinds of concerns rhetor scholars might have about the communicative and participatory elements of space. To shift, however, from a more general concern with space, to a more particular and, as we will see, scalar approach to textures, further complicates what one might understand as "affordance" shedding light on the kind of sensations that inflect "middle ranges of agency," a register that is extraordinarily interactive.

Sedgwick continues: "I haven't perceived a texture until I've instantaneously hypothesized whether the object I'm perceiving was sedimented, extruded, laminated, granulated, polished, distressed, felted, or fluffed up. Similarly, to perceive texture is to know or hypothesize whether a thing will be easy or hard, safe or dangerous to grasp, to stack, to fold, to shred, to climb on, to stretch, to slide, to soak. Even more immediately than other perceptual systems, it seems, the sense of touch makes nonsense out of any dualistic understanding of agency and passivity; to touch is always already to reach out, to fondle, to heft, to tap, or to enfold, and always also to understand other people or natural forces as having effectually done so before oneself, if only in the making of the textured object." (13-14)

To perceive texture is to immediately understand oneself to be part of a long history of touch, of the making and unmaking of different surfaces, and to release a desire to continue to make a mark, to imprint one's own activities on the texture of everyday surfaces. Citing Walter Benjamin, who explained that the bourgeois uses "covers and cases...which preserve the impression of every touch. For the ...style of the end of the second empire, a dwelling becomes a kind of casing...this style views [the dwelling] as a kind of case for a person and embeds him in it together with all his appurtenances, tending his traces as nature tends dead fauna embedded in granite..." (Citing Benjamin 46-47)

It is easy to see this obsession with imprint to continue in our contemporary moment. We need only look as far as the next smart phone, encased with covers that not only protect the object, but individualize it, plastic screens that maintain the oily traces of digits that swipe and tap, interfacing with a contemporary environment whilst always carrying linkages to digital screens. Whereas it is tempting to view modernist environs as textureless--sheer sheen--again, Sedgwick cautions against this dualism, quoting Bora: "smoothness is both a type of texture and texture's other" (quoting bora p 99, sedgwick p 14). Smoothness is texture, repudiating the trace of contact, whereas "texxture" "is the kind of texture that is dense with offered information about how, substantively, historically, materially, it came into being. A brick or a metal work pot that still bears the scars and uneven sheen of its making would exemplify texxture...but there is also the texture...that defiantly or even invisibly blocks or refuses such information...texture that signifies the willed erasure of its history...however high the gloss, there is no such thing as textural lack."(sedgeiwck p 14-15)

Thus, if we return to the now familiar context for this blog, the western city, we can see the jostling between texture and texxture, between imprint and high gloss, in scenes as ordinary as a buffed wall, or, even more disturbingly, new efforts to "sell" tags, a point of collision between bourgeois desire for ownership via individualized casings, and the graffiti writer's effort to leave their mark on otherwise smooth (imprint resistant) urban spaces. 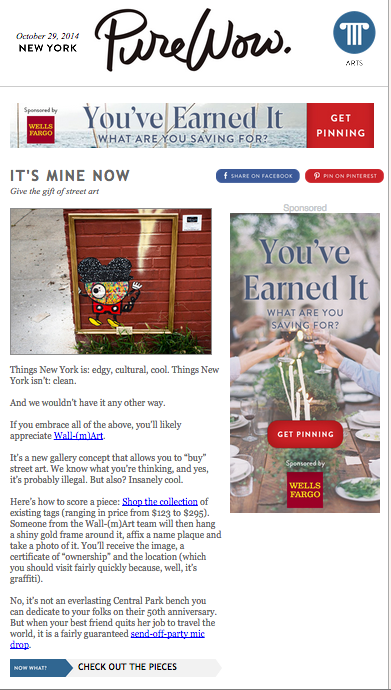 Describing the "gift" of "authentic" street art, given by putting a tacky (high gloss) personalized frame around a tag, character, or statement, is characterized as edgy and cool. With the simple input of credit card someone with no connection to the graffiti movement ostensively can posit themselves as "owner" (because there is a certificate to prove it). Beyond the initial nauseau this might inspire in other readers who have attachments to the writing community, and may see this as crass commodification of what is often complex and risky practices, often by communities of color to be "owned" by upper class populations, there is something else. Enframing, cropping the tag from the wall itself implies a kind of replacement of texxture by texture: the first act of tagging, which is participatory and responds to the affordances of the wall, the paint can, the rhythms of the city, is aggressively ignored not touched but merely blocked off to create a new narrative of ownership, a capitalist imprint of commodification and fetishization. To put it simply: the first tagging practice is a multisensorial experience of smell, touch, heightened listening, and proximity and then distance, whereas the second collapses it into the visual, and the two dimensional, one that may imply the tactile, but largely as that which is lost.

Sedgwick helps us think about the relationship between vision and touch in texture. She notes: "texture itself is no coextensive with any single sense, but rather tends to be liminally registered 'on the border of properties of touch and vision'...other senses beyond the visual and haptic are involved in the perception of texture, as when we hear the brush-brush of corduroy trousers, or the crunch of extra-crispy chicken." (15) Moreover, scale impacts the dominance of some sense to others: "the increasingly divergent physical scales (and the highly differential rates of their change) that characterize the relation between touch and vision in the modern period result in understandings of texture that make it as apt to represent crises and fissures of meaning as metonymic continuities." (16) By way of example, Sedgwick describes the experience of airplane travel and seeing a forest below, "texture is what the whole acre of trees can proved" and then the experience of chopping wood "a single tree may constitute shape or structure within your visual field...texture pertains to the level of the cross-grained fibers of the wood in relation to the sleek bit of the axe." (16)
Finally, when embracing an object or a person, sight can be obliterated. Thus, "texture...comprises an array of perceptual data that includes repetition, but whose degree of organization hovers just below the level of shape or structure." (16)

In short, encounters with texture include the forest and the trees, the macro and the the micro. It includes smooth space, and sticky space, and has sharp implications for how inhabitants of urban space engage, create, and respond to their various casings. I can only hope that the engagement will tend more towards generosity and curiosity than simple avarice and ownership.

Thoughts touched by discussion in the Gender and Affect Reading group hosted by Pitt's Gender Sexuality and Women's Studies program.
Posted by Caitlin's Blog at 9:03 AM