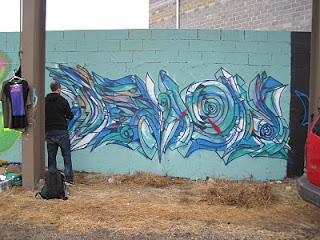 I met DEMON at the Zhou B Gallery during the opening party. MCing, saying hi to everyone, and appearing in several places at once, was clearly very busy. Throughout the festival I saw him pop up at every wall to check on things, interested in making sure everyone was doing ok and that everything was cool.

I was grateful to catch a few minutes to talk with him during the first day of MOS and learn a little about some of the MOS organization process, and his own perspective as a participant as well. Here is the transcript. 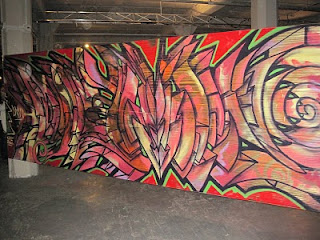 Cb: When did you start painting and why?

D: I started when I was a kid, maybe 10 years old. It was because it was kind of just that hip hop was really big back then and it was all one package and you wanted to break dance, and rap and dj and do graffiti. I also was an artist, when I was a kid I would always draw and stuff before I started doing graffiti, trying to imitate comic books so it kind of went hand in hand. Years later I got more into the music side [of hip hop] when I was around 18, 19, and I kind of drifted from the art thing, but then through the music I intersected with ZORE G-TEK a couple other guys I went to high school with, and they kind of brought me back into the graffiti art. So from there I just started going.

Cb: Where did you get your style from?

D: I started bombing this one name: I did this kind of square tag, it was a square big kind of throwup, and a friend of mine who was not even a writer was like, "you should do a 3-d on it and should make it look like a maze." I did and was like "oh that's cool but it was still just square." So after that I was like, "What if I d do these wildstyle tags with a lot of little bits and then do the 3-d from that," and I did it and was like "oh that’s cool." There is a couple of cats that do stuff like that: SACRED from LA is one, and there is an old school dude RIDDLE from Chicago,but it doesn’t have exactly the same kind of folded paper look. I call it the wild onion style, because its from Chicago, just for fun.

Cb: Is that what you did for the shrink wrap mural—yeah that was really cool. It does look like a maze, it also looks like roses.

CB: What year was it that you started writing?

D: ’84, though really 92 is when I started really piecing and stuff.

CB: Do you paint in Little Village external to meeting of styles or is it just during Meeting of Styles?

CB: Do you interact with the Little Village residents, non graffiti writers?

D: Oh sure. We know the owner. Which is basically how we got the walls, and there are families over on the Sawyer side that will set up and sell tacos to everybody. Its just whoever walks by. I always engage people that come up to me. Usually because I’m wearing something that says Meeting of Styles, so they know that I’m part of it, and they always come up to me.

CB: Have you run into any issues, conflicts, maybe with community members, getting walls, do you have to get permits for the walls?

D: No we haven’t had any conflicts, and no we don’t really get permits because we get permission from the owner and technically since its private property, and since its not advertising so there's not commission money or anything, you don’t have to get a permit from the city. The cops sometimes will try to tell you you do [need a permit] but you can call the city and they will say yeah you don’t need a permit if its your own property. But the cops around here are actually pretty cool. We’ve been painting here for so long and they actually see that we are trying to do something positive. As opposed to guys gangbanging they they are dealing with.

CB: How long have you been doing the Meeting of Styles?

D: I’ve been doing it since the beginning. Eight years.

CB: What changes have you seen?

D: There have been ups and downs. ...once in a while we’d get contributions from different companies which kind of helps.. Lately its been harder and harder to get the paint sponsorship and to get other money. I don’t know if it’s the economy or that people just don’t want to sponsor graffiti events, I don’t know what it is. The changes in spaces we get for the gallery shows and the party nights have gotten better. We used to just try and find any random gallery. We had a space in Pilsen called 54b, and this year it is the Zhou Brothers Art Center which is a very big step up.

CB: What are the strategies for every year raising money? Do you go to Montana Paints every year?

D: It's really just grass roots. Its all out of our pocket. I might get a little money from some of the local stores like Uprise, Silver Room, the Basement, maybe a couple dollars so I could get the flyers out, but the past couple years we haven’t really gotten any significant money from anybody, so we just do it out of pocket and we get paint from somewhere. Last year we had a paint sponsor, Blubber Colors, this year Montana they are sponsoring only the front side of the wall.

CB: Why the front side?

D: I guess because it's the focal point of the wall and it's more visible.

CB: Do you have any idea what happened in the festival in New York? Because it was posted and it just went away.

D: I really don’t know and I think the same thing is going to happen in Cali which is supposed to be this weekend. Those cities have kind of always been not as organized as we have as far as Meeting of Styles, I really don’t know the specifics. Really the one in Cali out of the last 7 or 8 years they have been doing it there 5 of them have been organized by ZORE. From Chicago, but he has connections out there and its constantly moving back and forth.

CB: So it doesn’t have a home base?

CB: How would you feel if there weren’t any more Meeting of Styles?

D: I guess sad, relieved in a way that I wouldn’t have to do as much work. I’m just joking. I think there is a lot of controversy with it, some people get mad about who paints and whatever what walls at the same time in a way everyone would be really disappointed because there aren't really any graffiti related events in Chicago. There used to be the CTA battle back in the early 90s and from that point there wasn’t anything until Meeting of Styles. Except for Grills and Skills out in Rockford, Paint Wars.

CB: What do you think the purpose is of Meeting of Styles?

D: It is supposed to be kind of a gathering of graffiti writers from different places and the meeting of their styles, and to paint with people that you don’t usually paint with. A lot of times in Chicago we don’t get to do it like that because we don’t get as many out of towners. But when we do we’ve had several times people on this front wall from Italy and Germany and Texas or Cali—we do have one from Cali—Basically its like graffiti awareness and kind of a way to celebrate the culture of graffiti and hip hop. All of the Meeting of the Styles usually have some hip hop along with them, usually we have some music, but the focal point is always graffiti. There aren't a whole lot of events that are for graffiti. Its kind of political. The main organizer from Germany YOURS, he likes to make every year a theme. And it usually has something about about dreams, dream bigger, or change the world types of things, or theVenus Project, so there is a deeper meaning behind it as far as what the themes are and trying to expose people to them…

CB: Do you think the themes are actually acted out in the specific productions that people do or is it sort of just like…

D: They [the themes] really are. We haven’t done it as much recently here, but a couple of years ago we did. The ones in Europe, they do a lot more. They usually have at least one wall dedicated to the theme and they will do all kind of different things. One year I was out there and these guys from Ireland did kind of the Hollow B-boys- these b-boys that just had really expensive clothes on and glasses but you could see their insides and they had just really small hearts and really small brains. It was pretty funny.

CB: Who is the audience for Meeting of Styles—is it just graffiti writers or are you trying to push it to a bigger—

D: Its everybody. It's an event for graffiti writers to paint and for everyone else to see.

CB: What publicity strategies do you use to create that effect?

D: We use internet, facebook, emailing. We usually put out flyers or posters and a lot of times we’ll get stuff from the Reader, advertise in the Reader, and there is an artist archive in Chicago [60 Inches from Center] and they have posted our stuff, and we work with Columbia and the Art Institute.

CB: How many helpers do you usually have every year?

D: Anywhere from ten to twenty, in various ways. Some drift in and out.

CB: What do you think the future of graffiti—and as it becomes more an more global?

D: It's already being used highly in advertising, there is a group in Chicago that is all graffiti writers and they are a company who does ads for companies and that’s their living. I don’t want to say that the future of graffiti is advertising but that’s one path. And there's just always going to be the underground element to graffiti because of the adrenaline rush that kids want to get out of bombing, so that part of it. That essential [element] of what graffiti is will always be around because kids are always going to want to rebel against society and put their name on things and show who they are. Especially, well most graffiti artists come from the inner cities and even if [not] consciously, they feel not heard and unappreciated. I think graffiti is a way for them to be heard.

CB: Thank you so much.

**pictures included with permission from DEMON, the top one from the MOS wall, the bottom one from the Zhou B gallery show.
Posted by Caitlin's Blog at 2:17 PM