"Meeting of Styles" -- Fights Over city Space Played out in Paint: Buffing, Dissing, and Placas 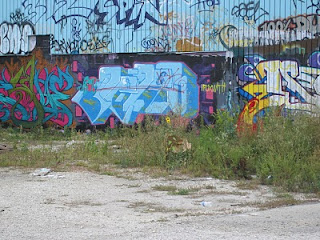 I went back to 30th and Kedzie to look at the finished walls this Tuesday, and after a thoroughly Chicago bus ride, jam packed at noon, with tons of strollers, preaching elderly women, folks just trying to get by, I staggered off and ran to see the walls. On the Wall of Style, the kind of central wall for the festival, an billboard company had drilled giant metal posts into the wall, going over STEF's and two other pieces, slashing through them. For advertising. I was reminded by the statement of purpose on the MOS website which says that "Since 1997 We are keeping it real, instead of faking the fun focusing on culture instead of commerce," and saddened that physically "commerce" had violently damaged days' worth of work by talented artists. 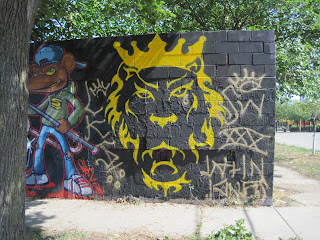 I continued walking west on 30th, rounded the corner, and saw what used to be a Red Rum piece buffed out, with a gold lion, and a Latin Kings tag over it. I had seen a few pieces vandalized that weekend: three by 36th and Albany with lines of red paint over them, but this seemed different. I had noticed the Latin Kings throwup across the street. I mentioned this to PATH ONE who I interviewed later that afternoon 9transcript to follwo when I learn how to embed onto this site), and he suggested that because it was an Old School spot maybe someone had reserved it for them, and said that it was uncharacteristic of gangs and more characteristic of writers to go through the trouble of buffing the wall-- you only buff something if you want to paint it yourself.

But what the paint tells us is a complex story about different visuals vying for a place on a corner, in a space that is clearly vulnerable to multiple kinds of forces of destruction (weather, advertisements, etcetera). Even though it is frankly a bummer to see hours of work buffed out, it is a healthy reminder of the fragility of this space, and how the most durable product seems to be the social connections people make, not the art work.
Posted by Caitlin's Blog at 12:58 PM