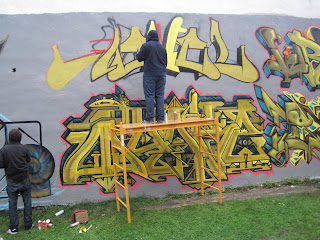 Quake, hailing from San Francisco, and writing since 1986, painted a fantastic piece on 49th and Ashland. He offered some really helpful insight about graffiti writing as a kind of a "consciousness" that tells you something about and reflects the specific cities that it in. Writing as a kind of mirror on its environment. The transcript follows:

CB: So what name do you write?

CB: When did you start writing?

CB: What got you into it?

Q: Basically I was a skateboarder so I’d travel a lot and I just kind of started writing it just came naturally before I did graffiti I was already writing my name on stuff and hitting up punk rock bands. And things of that nature, so I pretty much was always a writer.

CB: Where did you get your style from, what inspired you?

Q: Mainly old Bay writers, DREAM, SPY, DOUG1 from TMF, those are my biggest influences, but, probably mostly DREAM because I think I have a lot of similarity to his style because it influenced me a lot.

CB: Have you painted in Chicago before?

Q: This is my first time painting in Chicago.

CB: And how did you find out about Meeting of Styles?

Q: I found out from XHAUST because me and XHAUST painted together in San Antonio for Clogged Caps then these guys, CBS basically invited me out.

CB: How do you prepare for the festival, did you have to do anything extra?

Q: I just did a sketch basically.

CB: Have you been to other Meeting of Styles events before?

Q: I have, I painted for the San Francisco one that was in town.

CB: what was the most exciting part for you?

Q: Probably just being with everybody, just hanging out with everyone, just using the same color schemes is always exciting to me…just painting with your boys. It’s a feeling that cant be beat.

CB: Whats most difficult about it?

CB: Do you have weather issues in San Francisco?

Q: No. it’s a little cold but it ain’t like this you know!

CB: How would you feel if there were no more Meeting of Styles?

Q: I would be bummed, because I think it really brings the scene so much closer together and you get to paint with a lot of people that you potentially would never have a chance to paint with and it also opens up doors for new walls, and more murals. It’s a good thing.

CB: How do you document your work—do you use Facebook do you us Flikr do you use like online…

Q: I don’t. I just buy a lot of memory cards, fill em up, and throw em in a drawer and then someday maybe I’ll get to doing something with it.

CB: How do you feel when your work gets gone over?

Q: I don’t mind, it just makes, pushes me to do more work.

CB: How do you network with other writers, or do you try to network at all?

Q: I do, I really do, usually through events like this but usually, my crews are so big each of our crews is probably about a hundred people all together so petty much that’s enough people right there for me to do everything I want to do—I don’t have to look for new partners or anything like that because I already have a ton.

CB: Do you have any concerns about the future of graffiti?

Q: Well I think its obviously going more of a commercial direction just like skateboarding did. Ten fifteen years ago. And I think its pretty interesting, I know a lot of people are afraid of it, and worried about selling out and all these different things, but I think its great, the more exposure the better. Its great.

CB: Do you think its important to see international writers at MOS and why?

Q: Definitely, because they have such a unique style. I think it adds so much more flavor just like spending time in Europe over there and living in Austria and Vienna with the Lords Crew out there I brought back without even knowing it, after I returned I realized how much I had taken in and how much it had changed and developed my style , so I think it kind of opens up your eyes to a completely different style based on the environment that they live in.

CB: Do you feel like Meeting of Styles is for just graffiti writers or do you think it has other audiences that it speaks to?

Q: I think it could speak to muralists, could speak to so many street artists things like that. I think it kind of speaks to everyone. It also kind of teaches people about this because there are so many misconceptions about graffiti art so it allows them to meet us and you know.

CB: Do you think it could be better publicized—like in San Francisco did people know about it?

Q: No it just kind of happened. We knew because some of the paint sponsors we knew so they told us about it—it could definitely use more than just word of mouth.

Q: Well I think really it’s a consciousness. Graffiti writers by nature are very unique individuals and they all have their own perspectives and everybody has their own interests, like you said, the Dark Arts, music, there’s a wide variety so it speaks to all different types of people there is not one, its not a very clone thing or following a bunch of sheep—everybody has their own path. So I think that you meet a lot of interesting people through graffiti. You meet a lot of assholes as well, but, I think more times than not most of the people are very unique individuals that teach you something.

Q: Hope that helps you girl.