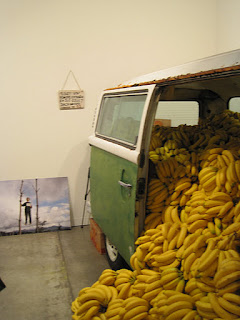 So this is a rather vent-y post. I have never been to a Biennale although reading about them in art and critical theory journals to an academic they seem like a place to be the kid in the proverbial candy store. So with great excitement, and a little trepidation I sallied forth to Miami Beach. I woke up early to go to the first of the Conversations, a series of public talks held in an auditorium of the Miami Beach Convention Center. Wandering out Convention Center Drive I found what seemed like a plausible entrance (all of the buildings are white and City Hall is immediately before the Hall, and during my frantic walk there were few people) by following a skinny-tight-butt-fitting slacks wearing man with a beard and Ray-bans who was walking with a purpose to Hall C. There I encountered one of what became a quadrant of pink shrug wearing ushers. Fur, stacked heels, an array of white pants and slacks, coiffed hair, designer glasses, slightly irregular and thus highly modern skirt cuts, perfectly done makeup, manicured nails, and crisp hip suit jackets confronted me in the white hallway, with a white fabric hanging between the hall and the lecture room. The lecture room was set up with three sets of white chairs, facing a white screen, and with white benches in the back. Already mostly full, I sat on the bench, watching the cornicopia of people come in. After the start of the presentation, a “conversation” in which Michelle Kuo gave Gabriel Orozco different prompts to discuss various elements of his oeuvre, multiple more people filed in, this time including students looking more like myself with backbacks, scruffed up jeans, and imperfect hair, other men with half unbuttoned shirts, and an ordered chaos of facial hair. Lest the reader think that this has become a (poorly written) fashion blog, I will remind that these spectators, and also often exhibitors were styling themselves self-consciously as an art-appreciating public. And my observation and argument, which I will try to flesh out anecdotally is that the construction of elite art publicity requires a level of aggression in display, manner, and forms of engagement with work (and others). The why I am not sure of, though I’d hazard a guess that it has something to do with exclusive models of property ownership related to the economic structure of the gallery. 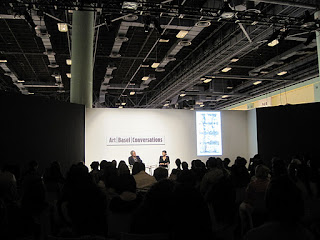 Criticisms of the gallery/museum are old news. I know this. My work, which deals with public art contains an implicit desire to refuse to prioritize the gallery space, and has drawn on the important work of scholars such as Rosalyn Deutsche, among others. However what I miss in reading such criticisms is the phenomenological problem, the felt exigence that moves these writers to critique. I experienced such a movement at Art Basel.

During the talk, the bodies filing in late had nowhere to stand but in an increasing pileup in the back corners of the room, and in front of the back bench, or on the floor. Because of space issues these overflow-folks would end up standing in front of we bench-sitters. Thus ensued a forty minute battle fought with innuendo and the poke of a program between a couple seated to my right, and whatever person dared stand in front of them. Vision was not so much relevant to this presentation: Orozco declared early on that the slide-show was screwed up and the images were not corresponding to his words. Perhaps the couple wanted to have the experience of a discord between sight and sound to theorize the gap between the signifier and the signifier, or they were protecting their space, or they couldn’t hear without seeing, or they were claustrophobic…but this miniature battle which I thought was amusing but aberrant only prefaced what was to come.

Waiting to go into the main exhibit a pileup occurred—the “well heeled” as an art magazine labeled the Art Basel public rushed the single usher at the entrance, insisting that their VIP status entitled them to entrance to the room inside which was in fact just another holding space. The usher became a body-machine which is to say that she reverted to repetition and politeness to soften the sarcastic and passive aggressive protests by patrons who needed to enter the gallery space 5 minutes early. “Please, only exhibitors, show your exhibitors passes only. The show does not open until NOON exhibitors only.” A larger man stormed up to her, blind to the two lines long that he walked through. “Can I help you sir?” She asked “I am a VIP.” “Sir, the exhibit is not yet open, please wait a few minutes and then you can enter. “But I have a VIP pass.” And so it continued. It created a bloat, a knot at the front of the line. The usher called for security support. At 12:02 I felt a surge and we were propelled forward. I wondered if I would experience my first trampling not at any of the music festivals I’ve gone to, but at Art Basel Miami. I also wondered what really the rush was since the art was for the most part, fixed.

The convention floor was a maze, organized by gallery dealer, not by artist, which facilitates buyers in locating work that they have searched out, but makes for a strange experience conceptually. Five minutes in I heard a woman ask “Can we buy this one?” The only thing that seemed to have visibility were dealers, buyers, and the art. It was a tad dangerous to step back to look at a work from far away because I had gotten run into several times. Champagne carts flitted around the plastic “gardens” set up: ingenious plots of Astroturf and fake hills to recline on, and there were no water fountains anywhere. The condition of viewing the work then, without buying $4 water, is light-headedness.

Eating a $12 dollar piece of spinach pie because I’d foolishly forgotten to bring my lunch I looked around the dining area. Champagne, wine, and beer bottles flowered. Collagen lips proliferated. A well-groomed dog sat on the lap of a well-coiffed woman who later showed the dog an exhibit by Brazilian artist Paulo Nazareth about overconsumption, forgetting, violence and oppressive immigration policy. I wondered if the dog counted as a child under 16, or had to pay the $40 day pass fee, since it was not visibly a student. The bananas overflowing from the green VW van that was part of the exhibit had not yet fully matured Paulo said, and sometimes people don’t notice ripening in the U.S. because everything is consumed so fast. 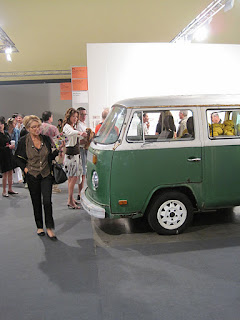 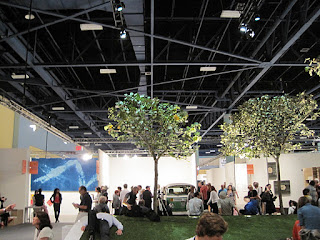 There was an unbelievable amount of interesting, beautiful, and well-executed work. My issue is not exactly with the art itself but what the Biennale environment makes of it. How can a work, ranging from the polemical to the oblique, generate reflexive thought when the possibility of having an intimate relation with the work is severely curtailed? It was hopeful, and helpful, to see animated student groups. Not everyone was rude, pushy, and overbearing. Watching participants play with Louise Bourgeoise’s “12 Mirrors” piece demonstrated how when the work calls for physical and emotional engagement without the necessity of purchase, it can create sociality. There was diversity in language, dress, gender, nationality—however not economically. I longed for Adrienne Piper to calmly remind walkers by about the assumptions they were making about art, identity, and privilege, and for Mlle Bourgeoisie to storm in, making a hubbub, forcing people to stop waving their business cards around like swords and just really look at the damn art. 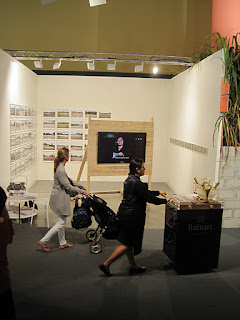 I have not yet gone to “Art Public” the public art exposition officially linked to the festival, so this account is by no means complete or exhaustive. Galleries themselves are not all oppressive. In the Wynwood Art District there was a huge amount of experimentation with medium, form, publicity. But what I experienced phenomenologically was a need to create a space, a break, to literally step away from the elite and monied universe of the convention center proper.

So now I have an experience based reason to say that I am more interested in, drawn to, and able to dwell around public art. After three hours I went to see the live mural/graffiti painting that the guys from CBS-Lords Crew had told me about at Meeting of Styles in Chicago. Haste said “This stuff you will notice, it is different than the stuff we did at Meeting of Styles—it is in the context of an art festival, and it is showing that graffiti can work in a fine art context.” The site specificity of many of these walls evinced the promise and possibility that public art can create a form of publicity that is responsive, generous, and intimate. There were dogs too, but these dogs would walk on their own four legs, and were participating in Occupy Art Basel performances.