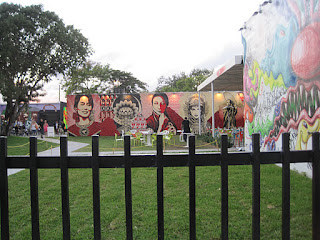 Wynwood Walls are located on 26th street (more or less) and 2nd avenue, and have large wrought iron gates on the 2nd avenue side, with a metal sign for the walls that resembles the “Metro” font used in Paris for train entrances. It is an immersive environment: at all times one is flanked by painted walls. Entering on the right are walls by Shepherd Fairey which surround a outdoor café area for the restaurant on the corner, which features 15 dollar entrees. A path leads to another open space, with more walls, one by a Brazilian artist, another a neon kind of homage to Keith Haring, with two smaller galleries facing each other across the plaza. Then another entrance into a part with a series of works: a street scene, a couple of portraits, a series of psychadelic mushroom type characters, an RV entirely covered in 3d neon mold-like splatters, a man’s face chiseled into the wall, a roided out baby-soldier, an Aztec figure, among others. Deer statues also covered in camo stand in a grass plot, and in the midst of a painted spill by the baby wall. A documentary was airing about the making of the walls. Testimony was given by several of the artists, who often gestured to the relationship between art and gentrification, that they are agents of neigborhood transformation, and voiced ambivalence about it. The “placemaker” Tony Goldman claimed that the project—to market Wynwood, a rugged neighborhood, as an art district was the “greatest risk taking” and noted that they use some of the “grit” in the neighborhood but not all of it “because there is a lot of grit.” Gaia in his clip noted that the artists make neighborhood transformation happen “for better or worse” and that Wynwood was a “gated community” which made it a museum where “art goes to die” or could be called a “vibrant art spaces.”

This ambivalence is well warranted. Repeatedly we see that transforming neighborhoods into arts areas has salutary effects on the local economy, but also problematic results for existing low to middle income residents who cannot afford either increased rent, or increased cost of living. The question becomes, who is art for, how does it relate to its environment, and what are the stakes of its non existence?

These questions are of course situational, varying from context to context, but Goldman’s comment about “grit” tells us something else about how the idea of “urban decay” works socially. Wynwood is a place of too much “grit” Goldman’s comment seems to suggest—the neighborhood is read architecturally, with little reference to the humans that occupy it. Indeed I only saw residents when I went down a wrong street, and then noticed people hanging out on porches, kids on corners, watching art-goers watch art. The function of art then is to correctly reorder spaces and surfaces, making them cleaner, less gritty. It is an interesting strategy, because the production of wall art is typically a messy enterprise involving vast amounts of waste, fumes, and in the case of the carved piece, creating more debris. It is not a subtraction but an addition. But not a simple one, because it changes the kinds of capital flows going into the neighborhood, flows of bodies circulating around it, representations framing it in publications of various sorts. The enterprise is “risky” not just for the investor but for the neighborhood, generating a series of unpredictable effects.

What is telling in Gaia’s comment about Wynwood being “gated” is that his conclusion actually might be the opposite, or modified. The art within the Wynwood walls does not go there to die per se because it is much more protected from vandalism, the elements, and being torn down or repainted by wall owners than many of the other works in the surrounding neighborhood, but it is precisely this lack of uncertainty, the safety guaranteed to the objects that makes them lose their life force, because public art is public exactly by being in a space of the unknown, the up for grabs, the utterly contingent. These works run the risk not of physically being destroyed but of becoming visual zombies. 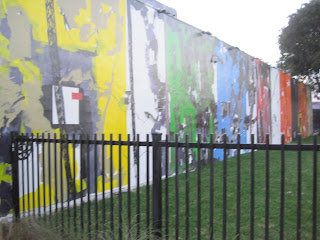 Some of the artists I’ve talked to also painting around Wynwood: Quake, Haste, Sloke, Stef, they have explained that work is not expected to be permanent. That it is about evolution and movement. So while wall art is fixed, spatially, it is not fixed in terms of its meaning. While what the opportunity I had to witness was lively, exciting, and vibrant, well framed by documentary material, what I fear is the risk of gated art spaces succumbing to the fate of dead, pinned butterflies in a collectors case: to become frozen spectacles of something that once generated movement and thought, becoming mere cadavers.