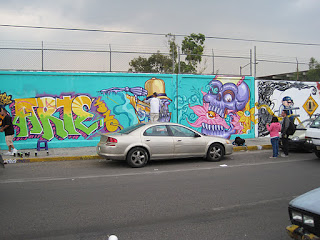 Writing for nearly twenty years in the Bay Area, ARTE 1810 was introduced to me by SWER. His commitment to his art was evident in him soldiering on with a broken toe during most of the festival. The transcript of our interview follows:

C: What name do you write and what crew name?

C: What do those names mean to you?

A: ARTE—when I came out I wanted a Spanish name, to represent my Latino heritage. Arte means Art in Spanish. When I started writing I used to battle a lot with other writers in the city. ARTE also stands for something, it means “Always Running The Enemy.”

C: What year and what age did you start writing?

A: I probably started doodling around 1992. So, 6th or 7th grade—I started with gangster kids graffiti, just trying to fit in, and it evolved, I guess, from me trying to get into a more graffiti style and then I started coloring it in and doing throw ups and stuff.

C: Do you remember what year that was?

A: When I started painting and stuff? It took me a while to actually start painting. I started writing in 92 didn’t start get into painting painting until 2000 or 1999.

C: why did you start?

A: I liked the fact of seeing my name in big burning colors. All over the city. That’s why I took it up.

C: Where did you get your style from.

A: I actually started with a guy named Rios, he’s the one that kind of took me under his wing, he’s another big name in San Francisco , and also taught SWER. He kind of took us both in and started teaching us both.

C: How did you find out about MOS?

A: I painted at MOS last year in San Francsico, and we have SWER over here in Mexico, so we decided to come over here…

C: What kind of differences do you see between the MOS here in Mexico and the one in San Francisco you were in?

A: I see out here that they are really big on detail and characters, and just their artwork here is on a whole different level. The 3-d here is amazing. It’s a different style.

C: And in San Francisco is it more like lettering?

A: My style is kind of old school. I just do simple colors, thre colors, 3-d, that's it, basic letters.

C: Why do you participate in Meeting of Styles?

A: Its all about the art, especially the fact that I get to travel, especially out of the country.

C: Whats your favorite memory or the best part of MOS for you?

A: just the whole event itself. Its been a different experience for me because I am in another country and meeting other writers that are big out here and its just been great, the whole thing has been awesome. You get a lot of love from the locals. They’ve been treating us right since we got here.

C: Anything difficult or frustrating about this Meeting of Styles?

A: No no, everything’s been pretty smooth.

C: Do you think its important to see international artists, and if so why?

A: Yeah definitely, you get a new understanding of what different cultures have to offer, different styles. Networking, meeting other people and getting to go to other places. Like maybe next time I might want to go to another state. Its all about networking. And that’s the thing about art. Its like a universal …all kinds of people. As long as you are involved with some kind of art or graffiti, you have a connection on this planet.

C: How would you feel if there weren’t any more meeting of styles?

A: Thatd be a really big loss to the graff world and not only to us but to the communities that we help beautify.

C: Do you have any worries about the future of graffiti, so for example commercialization or on the other hand stricter fines in a log of states now in the U.S..

A: Right, right. For example where I am from, I’m from the Bay Area, and over there a lot of the white trucks are offered to be painted legally but I guess the city is fining the merchant owners for having graffiti on their turcks so its like graffiti is always going to…people are always trying to prevent that type of art. Its not going to stop. Graffiti is graffiti. Just because some things, maybe people want to put a stop to it, that’s when its going to come harder, you know? You start seeing it in more outrageous places than you would usually see it. The more you try to stop it, the more its going to come.

C: Who is the audience for MOS? Is it just graffiti writers or are there other people you think see your work?

A: I think, and I hope and from what I see it is for everybody. Its for everybody to enjoy. Its not just for us its not just for them, its for everyone to come out with their families and to have a good time and walk around and talke a look at all of these wonderful artists and just enjoy the whole scenery. Because it is a beautiful thing going on.

C: When you were in San Francisco did you notice MOS changing the community that it was in in any way?

A: Its seems like since it is an event that looks like its more organized people are more open to walking by and interacting with the artists because it looks like a big event and something that is unified. It makes it look more positive.

C: Do you remember any interactions that you’ve had with community members here or in San Francsico?

A: I’ve had a couple of kids come up here and take pictures of us and introduce themselves to us, and a couple families going “That’s nice,” you know and they always come by and tell you “thank you.” Everybody appreciates it.

C: How do you define graffiti?

A: Can’t define it. Its just there.

A: Graffiti is more of a style, you know? But now its like muralists are interacting with graffiti artists, so it is like a blend of it, you know?

C: How do you document your work?

A: Pictures, really. Sometimes when you don’t get that picture you just remember what you did. That’s it.

C: How do you feel when your work gets gone over?

A: It gets irritating but as long as its not a diss or something direct to me I’m fine with it.

C: What makes you ok with it?

A: Well sometimes the city will come through and probably buff some of it, or half of it, and leave the other half up or some kids will come by and doodle on it, or someone else will put something on it…that’s fine with me because its been dissed already.

C: What do you think the social purpose of graffiti is more generally? How do you think it might be able to help communities?

A: You could have workshops and have kids involved attending workshops which gives them something to do other than running the streets. They could do community projects and involve the people.

C: Does it have to have an illegal aspect to have value?

A: I think its good for it to have a lot of legal things going on with graf because it shows that we are also artists too and we are not just out there to vandalize and mess up the city.

C: Do you feel like you have any relationship or influence from the Mexican mural movement for example Rivera, Siqueiros or Orozco? Like those guys?

C: Any artists that influence you that aren’t graffiti artists in terms of your style, or maybe graphic design influences?

A: Pretty much 1810 is a movement that was started, the definition is more than just the numbers itself if means to us freedom and revolution so it’s the year the revolution started out here in México, and the crew has expanded, its like we are all types of nationalities not just Mexicans even though the original idea came from Mexico.

C: So it sort of seems an idea of revolution shared internationally.

so talented, & such a intresting life you get to enjoy =) i know this is gonna get you far in life. && i find it amazing how much time & knowledge you put on any painting big or small.

ARTE has been killin it since I can remember from way back in his HTS days with me to taking over city's one at a time with the 1810 MOBB!
He is def a pioneer and well respected in the graf game. one love!
ReNsOne HTS

Thats my cousin!!!!! Since i can remember hes been loving graffitti.....took his book every where and tagged up the walls!!! Very much talented!!! Keep up the good work!!! SFC LOVES AND RESPECTS YOU!

That nigga Arte is the truth . Pimpin is easy to him. If he builds a tree house it would have a basement that's how creative he is. Oh yeah and he doesn't trust squirrels