Art Basel Day 3: Commemoration and the Life of the Monument: Judepapaiokothegenius’ Obelisk 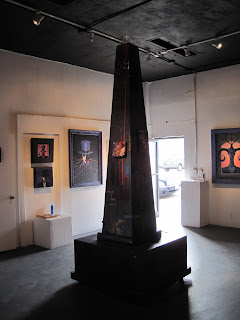 The Jakmel Art Gallery is a small but distinct space- Jude’s painting of a woman coming out of a tree, the geometrically painted exterior with a metal face, and circles of color draw the wanderer in from the street. Inside are an array of spiritual/totemic paintings based on Creole mythology using striking colors and clear strong lines. However what is most imposing is the seven foot tall blue obelisk a mere six feet from the door. The piece, the artist told me, is a model for what he hopes to be a bronze monument in Haiti, in order to remember the earthquake. The model is semiotically dense: blood comes down from the top, distinct against a royal blue background, and a combination of painted pieces (medical gloved hands holding a black hand, Toussaint L’Overture, angels and so forth) and collaged magazine cover images create an agitated surface. The words “help” move across the east side of the structure. 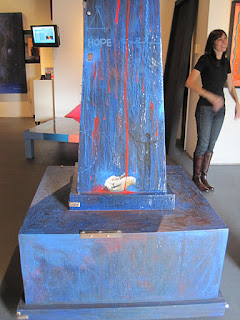 This piece performs what we often lose sight of when contemplated finished commemorative spaces: the public culture that form the aesthetic resources for the work. Jude’s use of magazines, historical figures, and his own commentary demonstrate the multiple kinds of memory and trauma at work, all at once subjective, collective, and unfinished.

The piece itself has traveled, becoming a part of an exhibit in Japan after the earthquake there, also demonstrating how monuments are not necessarily “external memory deposits” as they have been lambasted by some theorists but active vehicles for collaboration, communication and reconstruction. However one question that I have is to what degree the “final product” of the monument will eclipse this former life it had. 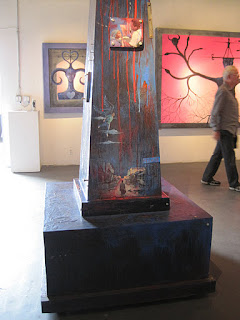 A concern more relevant to the final bronze monument to be created in Haiti is about what history is being reinforced—the doctors are almost exclusively white and victims all black in the images on the obelisk. What it runs the risk of underscoring is a narrative of Anglo-European rescue that elides the history of colonialism that helped create the conditions in the first place of poor physical and economic infrastructure that exacerbated the effects of the earthquake, and its ongoing catastrophic results. In the bronze likely color will not be relevant, but a relationship of victim and savior will be apparent. I wonder if the message will be “rescued” or “more action needed.” This is a concern that applies not just to Jude’s prospective monument, but commemorative public works in general: how do fixed works (physically) continue to have move and live in terms of their meaning? 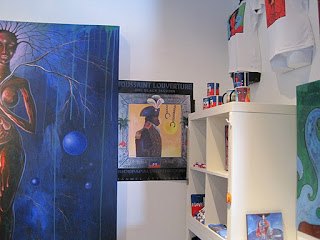 Thanks to Jude for speaking with me about his work, it is truly beautiful.