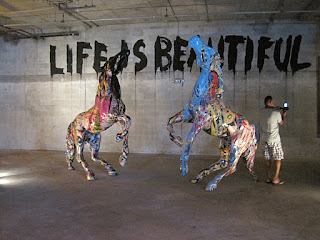 Yesterday I saw Mr. Brainwash’s gallery on 21st and Collins. The large 2 story exhibit had a giant Mr. Potato Head with a spray can in his hand, starship trooper figures on the balconies, and a banner with Hitchcock with a graffiti background behind. 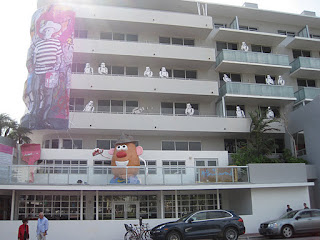 Entering the large warehouse I was barricaded with images, chickens covered in paint scattered around, large scale sculptures (two horses on their hind legs framed the painted slogan ‘life is beautiful’ in the back) with display cases holding ‘relics’ of his work (paint stained shoes and pants, type writers with the phrases ‘life is beautiful” and so forth) and oil/acrylic paintings which conformed to the formula of iconic figure, figure holding a brush or spray can, and a slogan, and a graffiti style background. There were a ton of people there, lots of kids and families, a couple I ended up walking behind was enthralled the man telling the woman “do you know the history of this painting?” pointing to a reappropriation of Norman Rockwell’s “1st amendment” painting with van Gogh substituted for the main figure and the title being “tagger”. The woman said “No” and the man said “I will explain it all to you Van Gogh was also a tagger. This is a very important painting.” Later they asked for a photo with Thierry Guetta/Mr. Brainwash and congratulated him on his work. Another large man took a photo with the horses “make sure life is beautiful” is visible. A couple talked to Guetta about buying one his works “this is the only one left” he said “but it looks like that other one over there” they said pointing to a near replica “but see the paint drips” Thierry gestured. I didn’t stay to see the conclusion of the transaction. The exhibit was if anything, fashionable, presenting an edgy surface and easily identifiable figures. The handout of Guetta’s bio described him as a “pop” artist, inspired by his research subjects, street artists, to make street based pop art, and then going public in 2008. Notably, in the film that emerged from Guetta’s footage, “Exit Through the Giftshop” by Banksy, Guetta is posited as kind of a mad fool, who outraged many of the subjects he had recorded by appropriating their styles, called “biting” in the graffiti world. I had heard him mentioned by a couple of my writer friends, who sadly noted that he was stationed near the Art Miami central festival, that he was unoriginal, that he was reviled.

I initially watched Exit Through the Gift Shop because it was produced by Banksy and he was one of the five to six street artists that I knew of at the time. The movie, which is beautifully filmed with dramatic cuts and incisive humo read ot me, upon fist viewing as a story of Graffiti/Street art having been victimized, taken advantage of and cheapened by Guetta, shorn of its authenticity and edginess and turned into a consumable object. 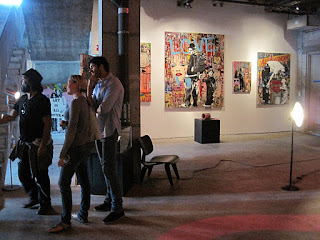 I told my grandparents to see the film that Christmas, because it was the most mainstream thing I knew of that featured talented street and graffiti artists, and they wanted to know what it was I studied/wrote about. Much to my chagrin their diagnosis of the film was that “Banksy is talented, but that Mr. Brianwash, he is great, and a very good businessman.”

So running into Guetta at the gallery I told him my grandparents liked his worked, and asked to do a short interview. He kindly agreed, and the interview follows:

CB: How do you define your art?

CB: Can you say something about your process? It seems like a lot of this involved a team or a factory.

MBW: Some of the installs require help, because I want to make things bigger and bigger- I made a spray can that was 25 feet tall, and it becomes a whole industry. The small pieces, that work stays in the studio. 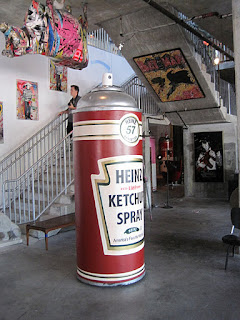 CB: Do you still do work in the streets?

MBW: I do some work but I do not have as much time, and doing all of this work takes time, working day and night so I do not have time to put it on the street—I leave that to others.

CB: Who is the desired audience for your work?

MBW: Kids, strollers, mothers—people—the mass—I am more a lover of people—hopefully kids will come and love the work and that with get something to change in them for them to dream and to create art. I love people.

CB: What artists are significant for you, who influenced you?

MBW: Lots of artists, I love Pollack, Magritte, Dali, Picasso, Basquiat. I love every art. The name is not as important. I am open to every art because art is freedom and this is a way that people can express themselves, I am not in the world to judge.

CB: Why call your art pop art when it has clear graffiti and street art influences?

MBW: Its another thing because it is done with a spray can, and people that were before me were doing street art. Whether you call it graffiti art, street art, pop art, in the end its always art…my son who is 18 wrote on my studio wall, what was it “Artists are like every color, each one different.”

CB: Does it make a difference to you whether your work is in the gallery or outside?

MBW: It does not matter, one way or the other.

CB: Thank you very much.

The neutrality and irrelevance that Guetta gives to specific spaces and the content of his work is evident in the site it was in at Art Basel. In South Beach, proximate to the “main” event at the Convention Center it was both spatially and economically nestled closer to the center of the art world, though not so central that it lost its allure of “renegade” art. The convention center itself was something of an alien space ship full of at, descending on Miami and leaving, with little altered. Shepherd Fairy, Cope 82, T-Kid, STEF, English, Gaia, Liquen, Estria, Vogue, Swoon, and many many other street art and graffiti icons located their work in the Wynwood Art District, near Overtown, in the alternative “Off the Basel Path” (as called by the Biscayne Times) locale. Notably, many of these figures were also film subjects for Guetta.

I want to offer a revised reading of the film having seen the MBW exhibit, and its patrons, arguing that MBW is less culprit of an exploitation of street art aesthetics, but tells us more about both graffiti’s relevance to a dominant public AND dominant frameworks for art consumption generally, which has to do with Formatting, Affect and Affirmation and Access and Recognition.

As noted above there is a clear formula to the paintings and/or sculptures: 1. Graffiti background 2. Repurposed Icon 3. Icon holding can or brush, more or less. Affirmation is used as an affective identification strategy: love, dreams and humor are deployed in all of the figures rather than critique or demands. Finally the use of icons, as well as the wealth of free posters, postcards, and admission to the exhibit created both conceptual accessibility and literal access for the works. People are allowed to enjoy without critical thought, consume without cost. And the enjoyment was palpable, made even more so because I was feeling snarky most of the time, and a little bit like a spy, having only talked to street artists over the last year or so. When the man said to his girlfriend “this is a tagger” I wanted to say “MBW is not—he is a celebrity pundit. You don’t know the whole story.” But then again neither do I. In fact there is not whole story, there are only fragments, and that’s what a general public sees.

Guetta’s responses to my questions about form, influence, site and audience incredibly generally, but affably, reminding me to take free posters on the way out. This struck me not as a calculating villain but a regular guy—one who tells us a lot more about conditions of reception and publicity of our time and the potential that graffiti has to be mainstreamed, packaged and formatted as a genre.

What is undeniable is the high level of enjoyment people were getting out of the art, posing with the deer, kids hanging off bull horns, people loudly reacting to the starship troopers and the Mr. Potato Head outside, getting to be proximate to the phrase “Life is Beautiful.” It demonstrated a clear need for more accessible and interactive public art, but it also admitted a clear complacency with contextless and apolitical art. It mirrors a public culture invested in play with icons rather than engagement with everyday realities. It also suggests that graffiti has an immense potential to reach a larger public, but reminds us, at what cost? Through repetition and decontextualization? By stripping it of irony and anger to make it affable? There is a danger in the affirmative and judgementless work of MBW but the danger does not lie solely with him, it is located in a liberal-democratic culture where liberalism wins out over democracy and consumption vanquishes rigorous thought.

I have just downloaded iStripper, and now I enjoy having the sexiest virtual strippers on my desktop.