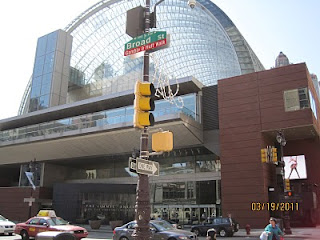 How Philly Moves, a project set to be unveiled in June of 2011 challenges classic definitions of what mural, community, and audience. A 50,000 foot long installation to be painted on the Philadelphia International Airport Parking lot it is a collaboration between photography JJ Tiziou, the Philadelphia Transportation Authority, and the Mural Arts Project.

A discussion with designer and photographer for the project, Tiziou helped to illuminate some or these concepts. The project was the brainchild of a previous proposal that Tiziou and a friend submitted in a project for the 52nd Street El line that did not go through. It was dance themed and was based on the notion of recruiting Philadelphia dancers to do photoshoots of their dancing. Tizziou resubmitted the proprosal to Mural Arts and it was approved, and he works with Jon Laidacker and his team in designing the proposal.

How Philly Moves will be a mural painted onto the airport parking structure, that has been produced via tracing photographic stills projected onto parachute cloth, and then painted in. Short film clips and stills projected over it will also be projected on part of the Kimmel Center wall during Philadelphia's International Festival of the Arts (PIFA) in April. The Kimmel Center projection will coincide with the beginning of painting.

One of my questions to JJ was about questions of medium and genre. He explained that photography can be made into a public art based on its mode of dissemination, by making images that go directly back to the subjects, "celebrating communities through image making." How Philly Moves is just one node in a broader project to democratizing the production of a city's image. One way that JJ makes images of his subjects accessible is by including the photographic archive on the project website. Instead of presenting the single polished image he also makes available the ones the he is "not excited about, but someone else might find it important." The shift to digital photography, he noted, might tie us to our computers, but also decreases production costs and allows widespread dissemination to multiple audiences. It decreases the authorial control of the photographer but also amplifies awareness of photographic process as one which is based strongly on movement, improvisation, fallibility, and relationality. "Photography is a dance," JJ explains, one which involves anticipation, improvisation, and a large dose of contingency. Because viewers will encounter the mural from I-95 going North or South they will have to engage the work quickly, in movement. Similar billboards in its monumental scale it offers an alternative to their consumptive messages, one based on human potentiality rather than commodified objects.

The introduction into photography and film into a still mural challenges the definition of the mural as a static painted object, but bolsters the importance of it as a process of collective engagement. Further, the digital elements of the mural do not make it unreal or virtual. It is just one part of a discursive network which has lines in many different parts of city, the Kimmel Center being one.

The Kimmel Center projection will occur on the Broad Street side of the Kimmel Center, a major thoroughfare in Philadelphia with all kinds of vehicles and pedestrian traffic. I asked JJ if he anticipated that viewers would primarily be art viewers interested in PIFA. He declined, explaining that the intallation's position on the exterior of the building means that people coming out of work in the middle of the night, volunteers or visitors to the neighboring homeless shelter, art festival attendees not aware of the exhibit stumbling upon it accidentally, or residents commuting to work "can't avoid it." Again the artwork is something that is easily accessible operating in a wide range of contexts. It is similar to a traditional mural in this respect.


What is sustained is a commitment to publicity, contingency, and resisting the reduction of the art world to an regime of experts. Murals as alternative image economies to that of mass media suggest the way that public art can establish alternative lines of communication and forms of association that work through multiple discursive networks (the installation, the archive, the monumental mural).
Posted by Caitlin's Blog at 2:02 PM