Moments of Inauguration and Spaces of Fragmentation: The Signer and the Magic Mural Garden 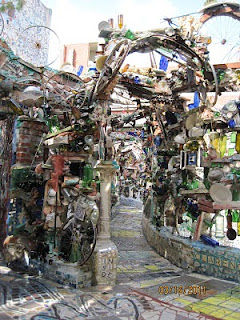 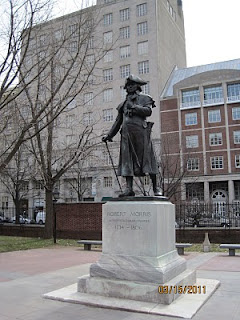 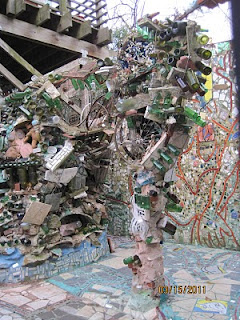 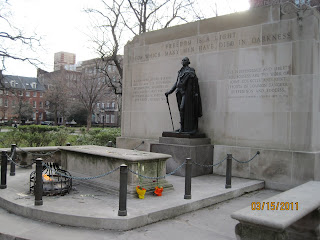 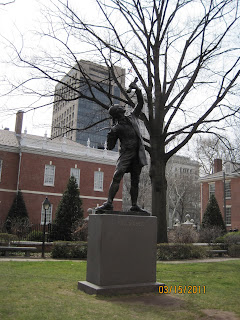 In this post I think about the differences between the kinds of looking that two major tourist sites offer. The first is that of “The Signer,” at Chestnut and 4th, near the old Federal Bank. One can stand on the marble bank steps and appraise the figure from its eastern side, viewing it in its totality. The green surrounding it, and rich brick walls frames the figure. A brick path circles around it, suggesting that one views at a distance. Watching people photograph the figure, and then cautiously, almost sneakily move towards it demonstrates a kind of pleasurable trespass. It made this author laugh out loud, joyfully, and wistfully: if only one could see the moment of signature.

This is the promise of monuments: to perpetually recreate historically pregnant moments, but to do so in a way that allows those who inhabit the space of the present to project their fantasies onto them. The Signer is an anonymous figure and he does not have specific name, or distinguishable features. His garments vaguely bespeak the 18th century and his stance is jubilant- it is done! In the moment of signature, holding the declaration of independence aloft, the signer has completed a historical act and stands in a space of celebration. This mural works affectively on the viewer, suggesting one look up, and in doing so likely take a breath, feeling exhilarated and energized. However, it is also a pleasurable figure because it is visually manageable. The organized tableau of the park and surrounding buildings creates a quiet space, uncluttered that can be easily placed into historical narrative.

Similarly, the Robert Morris statue across from the former Treasury speaks to how great names and single individuals carry weighty narratives—in Morris’ case, that he helped to finance a revolution.

The move to the Tomb of the unnamed soldier, however, creates an altered sensibility. It is an architectural space that draws you in, and clearly elicits powerful emotional reactions, evidenced by the offerings left at the site, a wreath and some flowers. The statue has in front of it a small live flame, its warmth tactilely drawing visitors in the present into sympathy with those in the past. Precisely because the soldier is anonymous is enables a numerous range of mourners to identify with and project their relationships to grief and war onto the statue.


The memorial is not to a particular war but rather to a specifically American ideogram. Above the wall behind the soldier reads “Freedom is al light for which many men have died in darkness,” and one’s eye is drawn down fist to the sepulcher and then to the flame, participating in an ongoing funeral process. One can sit on the benches to the left and right of the statue and watch the park go from light to dark, with the flame becoming an increasingly intense element, or can visit in midday when the sun draws the statue and sepulcher into greater visibility. The monument is in Olde City, but agitates and blurs the lines between official and unofficial, vernacular and institutional memory.

This blurring occurs more intensely at the fantastic site, Philadelphia’s Magic Garden, created by mosaicist Isaiah Zagar, on 9th and South Street. It is located besides a reggae shop, a beauty salon, across from a Savefresh and a little further from a Whole Foods. As a stranger to the city it seemed to be a keystone linking two different economic zones in the neighborhood. The garden, which is a single house and yard covered entirely, floor to ceiling, in mosaics, offers the visitor an ongoing visual bombardment that is playful, philosophical, and interactive. A brief reference to the history: the garden was created over a period of fourteen years by Isaiah Zagar starting in 1994 to beautify the vacant adjacent to Isaiah’s gallery. He and his wife Julia had moved to South street and began in 1968 a gallery called The Eyes Gallery still located at 402 S South Street, and after creating the mosaic garden as well as designing many mosaic houses and yards on the adjacent residential block, the property owner wanted to sell and demolish the garden in 2002. After lengthy legal battles the garden was incorporated by the City of Philadelphia and now is a community landmark.

Entering the gallery there is a basement, and three indoor rooms, and then an outdoor space with two tunnels and three staircases. Some outdoor chairs are placed under a trellis that is garnished with a bicycle wheel and reflective light chandelier. All of the mosaics are made out of ordinary objects, mostly waste. Complex turrets made out of clay figurines, beer bottles, and bicycle wheels reach sky high, and broken pieces of mirror reflect the viewer’s image back at them at every turn.


The Magic Gardens is perhaps the inverse of Old Capitol City—there are no concrete narratives, and there is literally no perspective from which on can get a holistic view of the artwork. Unlike the signer there is no space around the mosaic to contemplate it from—one is physically, visually, aurally inside the work. The Magic Gardens which is now a Philadelphia landmark, and icon, is a work that generates intensely intimate experiences because of its architectural design, with man alcoves and tunnels and reliefs, forcing this five foot eight author to crouch and duck to clear some of the overhangs, as well as the mirrors that at every instance reflect broken up images of yourself and the space back to you in an infinite relay.

Temporally the garden inaugurates a space of ordinariness. Constructed out of found objects that bear the weight of their age (bicycle wheels rust, bottles are eroded and endered opaque, mirrors crack and accumulate dust, and the cement which holds the objects together receives sedimentation of grime from the urban air), they are the marginalia of the everyday activities from the surrounds. The plurality, density, and whimsy of the colors, figures, objects and text offers multiple discourses and possible readings. This stands in sharp contrast to the clarity with which the Signer holds his document aloft exclaiming physically “It is done.” The Magic Gardens instead suggest a space of continuity, decay, recreation, and participation that is muddled, fragmented and historically complex. Forces of urban planning and rhetoric of blight are materially resisted by the gardens, as well as the liquidation impulses of a Boston realtor. The iconography of the human figures refers back to South American folk art traditions, marking the Zagar’s stay in Peru prior to founding the Eyes Gallery in 1968.

The question that one must ask is how do marketing and municipal agencies that attempt to brand Philadelphia contend with these seemingly inncomensurate approaches to Philadelphia history? The Signer suggests a narrative, grand history approach, while the Magic Gardens bespeak a history told through materiality that is ephemeral, mobile, and invites ongoing construction and reconstruction. What both reveal, however, is a persistent aura that clings to urban spaces where the passage of time and decay of the object renders it valuable, magnetizing and engaging both to locals and strangers. Both the statue and Zagar's mosaics offer mediating spaces for strangers to engage the city in an intimate way, albeit through divergent protocols of looking.
Posted by Caitlin's Blog at 3:33 AM