Love Letter: A Not so Secret Affair with Graffiti 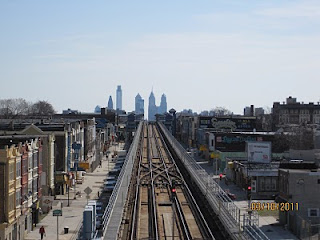 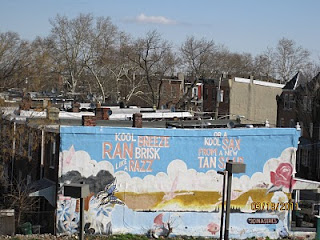 According to our tour guide on Saturday, while explaining the “Right” mural, Steve Powers had said of it “You ain’t got romance if you ain’t got finance.” The comment can be amplified out to provide a frame with which to think the material infrastructure necessary for urban spaces to become loved, and what the conditions of possibility for love is.

For an urban space to be a loved space it needs to have a history, a character, and a recognizable mode of address. The Love Letter project because of its style, intertextual references and spaces of inscription provides a history for graffiti but one that is made legible to audiences who ordinarily might not be aware of or looking for the complex social economy of the graffiti world. However it can only do so because of the economic and cultural sanction that it has been allowed by its being sponsored by the Pew Charitable Trust and the Mural Arts Project. To tell a story about graffiti art and to use the tactics and styles of that art the project has to operate under the mantle of muralism. Nevertheless, graffiti history ghosts the tour, many of Powers’ addressee’s being other graffiti artists, even though the tour is explicitly marketed at Powers’ love letter to the city. The city gains specificity as a city that is as much Powers’ remembered city as the Philadelphia in the present. I will discuss two pieces, and one anecdote in particular.

During the tour repeated references are made to Powers’ persona he is “Kramer-like,” a “character,” “quirky” and a former tagger who ahs “grown up.” A kind of teleological narrative is given about the move from tagging to muralism, and Power as a prolific tagger in the 80s, who refused Jane Golden’s (Executive Director and Founder of the Mural Arts Program) offer to join the mural arts program, and now sees the light, seems like the perfect and complete PR story that links the basis of the Anti Graffiti Network (the Mural Arts Program’s prior moniker) to the Mural Arts Mission of today.

The pieces themselves suggest something slightly more complex, and Powers’ blog gleefully provides additional pieces of ambiguity rather than solid answers. One piece of note is what the tour guide called a “shout out piece,” which she explained was painted by Powers on a wall already painted by a friend of his, Razz. After much mental flip flopping, even though Razz had given is permission for Powers to repaint, Powers decided to partially paint over it, turning it into a piece that paid homage to his friends. It is total nonsense to the outside viewer, or interpreted as a mystical piece . It does not at all related to the Love Letter series in that it is not gesturing towards romantic love, but rather friendship and non-exclusive intimacy. It also suggests that the multiple connections forged by Powers to the streets of Philadelphia are shot through with connections to other taggers, that it is both a geographic and social space. Were it not for the “# 30 in a Series” and Pew and MAP sanction it would be structurally identical to graffiti murals boasting crew and individual tagger’s names found all over the world.

The stylistic affinity with graffiti came to the fore more clearly in a mix-up surrounding the “Day Care/Car Fare” piece. It is visible in the skyline photo on the left foreground. That piece was completed in the summer, and then as the night time wall cleanup crews passed by it a member of the crew who had been working for over 25 years identified it as Powers’ work, known as ESPO as a tagger. The tour guide informed us at the outset of the tour that taggers painting at the level of elevated trains was common because at that height the night cleanup crews would be loath to climb up and remove their work, bestowing on it some level of longevity, which provides some context for the crewman’s reaction. The crewman said “I recognize this work it is ESPO’s we need to take it down.” The other crew members pointed to the Mural Arts insignia and the worker protested, saying that ESPO was clever and had likely appropriated the sign. The tour guide also informed us that the crew man had had to clean up a huge amount of ESPO’s tagging, so during the eighties no love was lost between them. So they painted out the “Day Care/Car Fare” piece. Jane Golden visited that morning to see the completed work and found it painted out, and realized the street crews had not been told about the Love Letter Project. Reluctantly telling Powers, he reacted with humor and insisted on having lunch with the cleanup crew worker to relive times gone past. What is notable in this narrative, beyond the happy tale of reconciliation and convergence between a reformed graffiti artist and unaware street cleaner, is that the mural was understood by experts in the field of graffiti art—street cleanup crew workers whose livelihoods are based on finding and eliminating graffiti- as structurally the same. The only difference was the kind of authorizing insignia.

The Love Letter tour then also reenacts the drama of the city’s fight against graffiti, and resolves it not by expulsion but integration. As noted in the earlier post, Powers’ conceived of the project as a kind of mimicry of Cornbread’s graffiti love notes in the 1960s. The vast discursive apparatus surrounding Love Letter has offered a kind of accidental institutionalization for graffiti turning it into an object of love, nostalgia, and visibility. However it is not by changing the form or content of the art but the channels of approval that it follows. If you aint got finance, institutionalization and legitimation, you ain’t got romance.

How does graffiti ghost Philadelphia's landscape? What affective geographies does it trace?
Posted by Caitlin's Blog at 3:41 PM