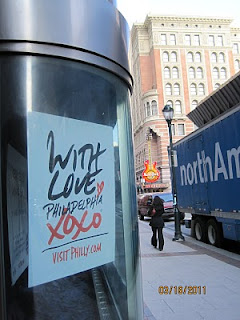 Philadelphia is the “City of Brotherly Love,” or more gender appropriately (thanks to Emily Winderman) “The City that Loves you Back.” It is appropriate then that the major Philadelphia tourism corporation and the Mural Arts Project have love themed approaches.

“Love From Philly,” coined by the Greater Philadelphia Tourism Marketing Company (GPTMC) began in May of 2009. Meeting with Director of Marketing, Cara Schneider, today she kindly talked to me about the genesis of the “Love from Philly” campaign. She said that it emerged in 2009 out of a meeting with most of the Philadelphia tourism industry representatives responding to a “vague feeling” that a change in strategies should occur in the wake of the 2008 recession. Cara says:

“That was really our CEO’s brilliance: in 08 she felt like she was beginning to see different patterns, you know, she obviously reads the papers, and you know just talking to restaurant owners and hoteliers and all the people we talk to all the time, there was a sense that things were shifting people were getting nervous, there was a new need, social media was usurping traditional media, and all of those things were just giving people a sense of ,not of impending doom, but of something is changing down the pike and we need to be doing something differently, it was a very vague feeling and there was a call for a big idea.”

Here marketing is understood as successful attunement: paying attention, looking for patterns, being receptive to social anxiety—in short it is a kind of affective mapping.

The Love Letter campaign is a series of playful letters, written in handwritten font, signed “Philadelphia XOXO” with short inviting messages about things, people, and characteristics of Philadelphia. It is still occurring, and targets general audiences, but also puts out lines for specific demographics.
Posted by Caitlin's Blog at 3:43 PM