The riskiness of publicity, or, Diego Rivera’s Ghost After speaking with Amy Johnston, director of Public Engagement at the Mural Arts Program I’ve been thinking a lot about institutionalization. This project was initially framed as something along the lines of “Polemical Murals” and “media space,” with the idea that I would uncover the hidden anxieties and the terrain of domestication and quietude that occurs when an outside art, muralism, becomes integrated into conventional urban processes. I have not by any means cracked this puzzle but what I have decided is that the initial story that I set out to be my frame: from revolution to tourism, risk to convention, from Diego Rivera era murals when muralists had to paint with guns at their side to protect their art, to the present, when artists can calmly provide background and context commentary about their work to be listened to via ipods, pdas and cell phones implies a judgment about the trajectory of mural arts that assumes institutional engagements involve zero risk. I wish, in this post, to amend that overly simplistic, and nostalgic, view.

Publicity involves risk. It risks the artist’s ego, it opens up how and what a neighborhood means to debate, and the end at product, whether it is a mural or a large scale photograph or digital projection is both literally and discursively available for commentary, criticism, and defacement. I want to illustrate this point with two anecdotes, from Amy Johnston and JJ Tiziou, and with two murals.

Amy, in generously talking to me about the current trajectory of the program explained Mural Arts’ emphasis on innovation and searching for new forms. She explained that as a public-private organization so in some sense a city agency, Mural Arts has to approach issues creatively rather than polemically. For example, Powers’ Love Letter project is geared towards revitalizing the Market Street corridor as well as offering a homage to Cornbread. The project presents a series of cryptic, ambiguous messages instead of direct demands or statements. Additionally, Love Letter stretches Mural Arts’ previous aesthetic patterns. The project represented a stylistic departure, since Powers’ project is predominantly text based, and MAP’s projects are primarily image based. Furthermore, since, as noted in an earlier post, it is an experiment in the longevity of different styles of paint, and the walls had not been investigated for architectural and social longevity with the depth Mural Arts usually does, the project challenges the notion of permanence to which Mural Arts usually adheres. Love Letter then exposes the frailty of murals as durational objects, the multiple contingencies that go into their persistence (wall structure, paint process, and the wall owners’ plans for the walls), as well as the possibility of multiple non-representational forms being community art. Amy also mentioned a grant that was recently acquired to continue working with the Department of Behavioral Health on issues related to homelessness, and doing further research into the therapeutic benefits that art making provides. The major project related to this was a Mural titled “Finding Home” which is on the mural mile tour, at 13th and Ludlow. Led by muralist Josh Sarantitis and muralist and weaver Katherine Penneckaker, Katherine worked with the homeless in taking fabric (parachute cloth) and then writing their stories, hopes, aspirations, fears on the cloth, and then weaving it into mats which were adhered to and then mounted on the west side of the mural. The materiality of the mural, that emotions are embedded into cloth and then placed onto the mural itself exhibits a great risk in terms of exposing the material products of affective labor to the elements, to defacement, and to potential destruction, as well as, of course, pointing to issues of invisibility and vulnerability that impacts homeless individuals (The mural, on top says IN VISIBLE DIGNITY and based on how one is standing, either on the south side of the mural it says Visible Dignity and on the West side it says Invisible). Pannepacker continued weaving classes with the homeless after the project ended and has turned it into a kind of skills building class where they make scarves that they then can sell. Amy remarked on the remarkable emotional work that this project does, but also that it is a learning experience for mural arts that provides information which the Department of Behavioral Health, a partner in the project, can use to better their other programs. Art here as experiment, Amy noted also means that Mural Arts is aware of the importance of acknowledging the value of mistakes and learning, and that flexibility is afforded by the strong institutional structure and time tested methodology for engagement that Mural Arts uses. The humility infused approach to restorative justice here suggests an openness to fallibility, and in face that it is embraced. This resonated with JJ Tiziou’s discussion of making the photographic archive available, not just showing the photographer’s “Portfolio shots,” to make understandable the relations and process involved in the making of an image.

Image making as creative, mistake laden, and not always perfect suggests the ways that institutional identity and a municipal partnership instead of opposition still leaves room for play, transformation, and innovation. On the Love Letter tour our guide cited a prank that Steve Powers/ESPO played in New York. He said that painting graffiti at night is not challenge, but painting during the day, that is something else. He painted 80 store-front aluminum gates, and when asked by residents, police, visitors what he was doing he said he was with the Exterior Surface Painting Outreach. The joke here of course is that a fake institutional identity provided cover for technically illegal acts, but the claim that painting is more difficult during the day can be extended metaphorically to complicate the Revolution/Institution binary that muralism is sometimes subjected to. Painting in the light of institutional, bureaucratic, public review, community meeting, wall certification day frankly seems like an immensely difficult and often frustrating process. The artist has to be willing to propose, adjust, re-propose, weather criticism and synthesize neighborhood feedback while still trying to be innovating and engaging. The work has to withstand demographic, historical and climactic alterations. The meaning of the work is vulnerable to appropriation, recontextualization and transformation. There is an immense risk in making objects available, public, and popular.

Diego Rivera carried a pistol, but he was also sponsored by the Ministry of Arts, the murals being a pet project of Vasconcelos. Revolutions and institutions share space, objects, and concerns. A block east of the Thomas Eakins House where Mural Arts is housed there is a mural in honor of Diego Rivera. It shows him sitting and eating at a table with other artists. In this seemingly banal scene what impacted me was the way that human lives move through many different spheres, and though claims made might be institutional or anti institutional, the persistent animating concerns and energies elide such easy classification, and relate to attachments to spaces, need for affiliation, and the impetus towards creation.

What happens if we suspend declarations of right and left and instead focus on creativity, innovation and augmenting energy? Spinoza says that conatus is the drive to affirm life, to pluralize connections, to maximize energy. My provisional suggestion after this extremely puzzling, exciting, and rewarding week is to think about the political work that these murals do in a complex media space not as polemical but instigative, provoking, and energy maximizing. 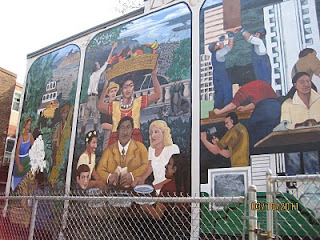 Many many thanks to Amy, JJ, Andrew, Kevin, Cara, Jon, and others I have talked to in weathering my flat-footed questions and in being immensely generous with their time, knowledge, affiliations, and resources.
Posted by Caitlin's Blog at 12:25 PM